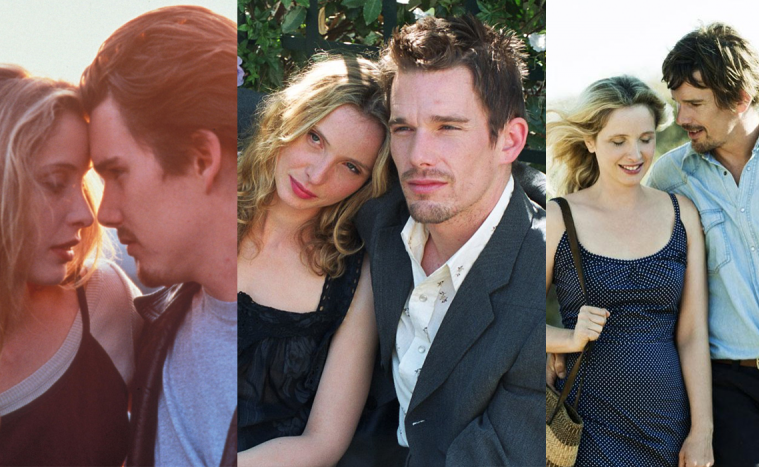 As the years pass in any relationship, one wishes they might have recorded that first interaction — the overwhelming euphoria of attraction and mutual edification of getting to know one another. This is one of the magnificent abilities of Richard Linklater‘s Before Sunrise, taken to even more romantic heights in his follow-up Before Sunset, both ravishingly restored in Criterion’s new trilogy box set, which also includes the feature-length documentary Richard Linklater: Dream is Destiny. Upon watching all three films back-to-back, the few years of distance from Before Midnight also further strengthens its effect. The sheen of 35mm in the first two films — an idyllic correlation with the arc of Jesse and Celine — gives way to the more unforgiving use of an Arri Alexa in the most recent film, which feels like a culmination of the conversational strands of mortality their younger selves previously found delight in discussing. It offers a more mature, realistic depiction of love, with all of its bumps and bruises, and ultimately, the effort required for a reconciliation. While the release of the box set trilogy may signal a definitive end to series, throughout various conversations on the discs — most notably an excellent black-and-white documentary on the set of Before Midnight directed by Chevalier‘s Athina Rachel Tsangari — the trio never rule a return out, but the earliest they would start thinking about it is 2018. So, as we await a potential quadrilogy expansion in 2022, this Criterion set is one of their most remarkable releases: a beautiful tribute to perhaps cinema’s finest trilogy, and with its special features, a comprehensive reflection on its lasting, eternal power. – Jordan R.

Christine Chubbuck’s final words resound with more eeriness the further the media collapses in on itself. “In keeping with Channel 40’s policy of bringing you the latest in ‘blood and guts,’ and in living color, you are going to see another first — attempted suicide.” Kate Lyn Sheil and Robert Greene dive into the gap between performance and authenticity, both as it pertains to the craft of acting and our lived and public lives, and cast about for the truth. Whether they find any is up for debate, but the journey is unquestionably riveting. – Dan S.