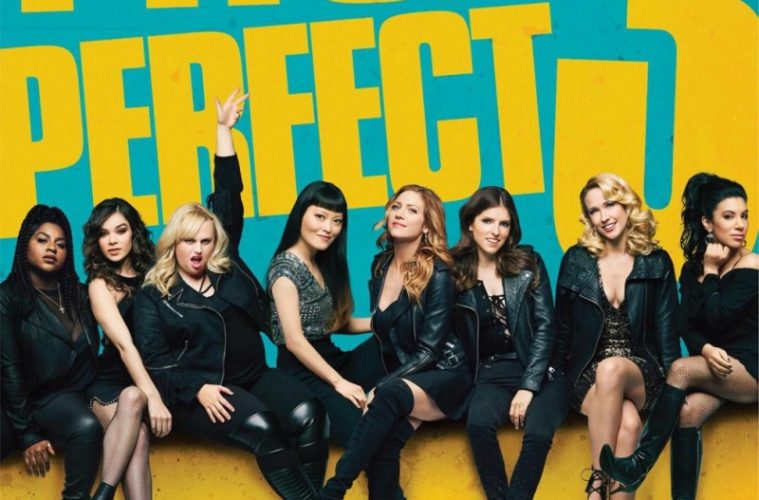 ‘Pitch Perfect 3’ Review: The Bellas are Back in a Sequel Aimed to Please

The opening sequence of Pitch Perfect 3 finds the Bellas aboard a luxury yacht doing a version of Britney Spears’ “Toxic” that feels even more synthetic than the original (a perfect pop confection in its own right, mind you), but before we can say “aca-WTF” and wonder how’d they end up there, we see a title card that reads “three weeks earlier.” It’s in this split second when the movie’s intentions materialize and you can decide if you’ll willingly come along for the ride or not; for it’s clear that the Bellas are no longer just the multiracial, quirky, extremely talented group of a cappella singers we met five years ago, but, as with most art in the 21st century, they’ve become the epitome of commercial.

And who can blame them? After the success of the first film, which spawned an even more unlikely Billboard hit in the shape of Anna Kendrick singing “Cups,” studios got greedy, and it was safe to assume that the Bellas would return in bigger, more outrageous adventures than before. Or was it? Films led by women rarely get sequels, and when they do they’re mostly met with cynical critical notices despite their box office success. Ask most men and they’ll tell you Sex and the City 2 was a flop (it wasn’t) as they’re lining up for the newest Michael Bay sequel. So in a way, coming to terms with how the Pitch Perfect series has gone from “pure and unexpectedly charming” to “bonkers and nonsensical” is akin to telling a history of why it’s important to have films led by women reclaim their rightful place in the entertainment hierarchy.

Teenage boys get their shape-shifting robots, angry cars, and space wars, so if the Bellas want to sing “Oops I Did It Again” on a rocket, let them have it.

Fortunately their adventures remain Earth-bound as the group reunites to take part in a USO tour where they’re trying to win the attention of the famous DJ Khaled (played by DJ Khaled). The Bellas have by then realized that they won’t be able to make it “in real life” as an all-girl a cappella group, and decide to have one last go at it before entering their more traditional adult lives. The plot then basically relies on vignettes where the Bellas sing in various European countries as they battle sexism, prejudice, and a menacing Australian criminal played by John Lithgow (don’t ask).

Director Trish Sie knows better than to mess with the formula and the film plays out like a reunion with the characters you love: there’s Kendrick’s pure and unassuming Becca, Anna Camp’s deliciously perky Aubrey, Brittany Snow’s Chloe surprisingly becoming a more sexually aware character this time around, and scene-stealers Hana Mae Lee and Rebel Wilson, who are truly acquired tastes. Elizabeth Banks, who directed the first sequel, returns as producer and cappella-obsessed journalist Gail Abernathy-McKadden-Feinberger, who is shooting a documentary about the Bellas alongside John Michael Higgins’ John Smith. They’re like Boris and Natasha with hearts.

The film relies on a series of winning musical montages which combine the likes of Blondie, Sia, and Beyoncé, with more unexpected surprises, including a moment where Becca, sitting alone with a beat machine, creates something you want to download on iTunes right away. At the center of the film there is also a subplot about staying true to your heart and the constant battle between consumerism and “real art,” but more often than not the film just aims to please its fans. If you weren’t a fan before they won’t try to win you over, and why would they? Pitch Perfect 3 is a kickass reminder that women don’t need to please anyone but themselves. Can I get an aca-”amen” with that?