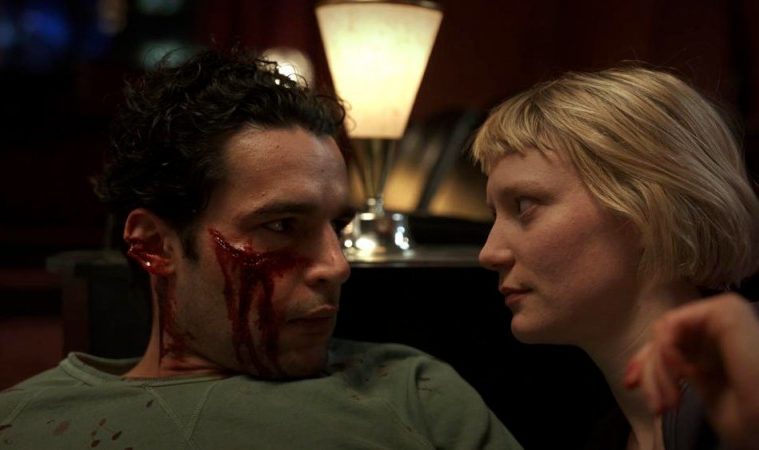 After his vividly nightmarish debut Eyes of My Mother, director Nicolas Pesce returned to Sundance Film Festival this year with another brutal horror offering, Piercing, starring Mia Wasikowska and Christopher Abbott. Now set for a release early next year, the first trailer and poster have arrived.

An adaptation of Ryu Mirakami’s novel, the film follows Abbott’s crazed protagonist who plans on murdering an unsuspecting call girl at a hotel. Unfortunately for him, he becomes allured by the mysterious woman who shows up (Wasikowska), which starts a dangerous game of chance and chase.

See the trailer and poster below via Indiewire for the film also starring Laia Costa, Marin Ireland, Maria Dizzia, and Wendell Pierce.

Reed (Christopher Abbott) is going on a business trip. He kisses his wife and infant son goodbye, but in lieu of a suitcase filled with clothes, he’s packed a toothbrush and a murder kit. Everything is meticulously planned: check into a hotel and kill an unsuspecting victim. Only then will he rid himself of his devious impulses and continue to be a good husband and father. But Reed gets more than he bargained for with Jackie (Mia Wasikowska), an alluring call girl who arrives at his room. First, they relax and get in the mood, but when there’s an unexpected disruption, the balance of control begins to sway back and forth between the two. Is he seeing things? Who’s playing whom? Before the night is over, a feverish nightmare will unfold, and Reed and Jackie will seal their bond in blood.