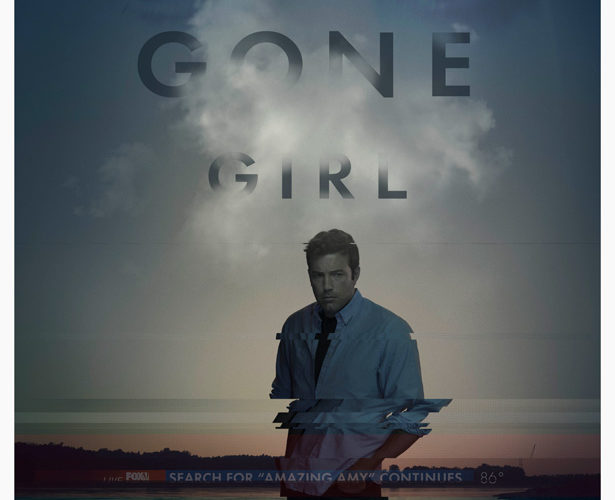 Something is wrong from the very first moments of Gone Girl, David Fincher‘s sinister, immensely entertaining tenth film and an adaptation of Gillian Flynn’s pulpy bestseller. Before Amy Dunne (Rosamund Pike) goes missing on her fifth wedding anniversary, before her husband Nick Dunne (Ben Affleck) quickly becomes the prime suspect, and before the multitude of twists and turns that follow, the ever-precise Fincher foreshadows his all-encompassing, disconcerting tone through simple opening credits.

In introducing the fictional, despondent Missouri town of North Carthage, each new shot and title card jumps to the next sooner than customary, establishing both a restless mood and formal approach, which will extend through many crucial climactic moments that follow. The propulsive energy rarely lets up throughout this staggeringly swift, deeply cynical 2.5-hour satire that sets its crosshairs on not only the institution of marriage, but media witch hunts, the legal process, and a recession-hit America. Affleck, with the consummate mixture of aloofness and weariness, delivers what is easily his most accomplished performance yet. With the pressure mounting as the hours tick by, his slight, questionable gestures and visible frustration during interviews with the police or being put nervously on display in front of the press are the first hints of what clever comedic touches Fincher employs.

That lurking darkness, by this point as identifiable a trait as any in the Fincher oeuvre, can be found in spades throughout, but Gone Girl is, first and foremost, a black comedy. Some of this can be attributed to the script, which revels in its own gleeful ridiculousness from the very first line, but much of the humor stems from its visual execution. In transferring the structure of Flynn’s novel, perspectives continually shift as the “he said” present-day is juxtaposed with the contrasting “she said” (and “writes,” via a diary) flashbacks, recounting their early romantic days. Smash cuts — such as Affleck extending his mouth for a kiss, in celebration of their engagement, to an officer completing his evidence-collecting cotton-swab wipe — are pulled off with droll wit.

The enigma of the film, at least going in, is certainly Pike’s character. It’s through an icy delivery and bemusing demeanor that she initially recounts the experience of growing up one step behind “Amazing Amy,” the subject of a popular children’s book series by her parents, before heading into much darker territory. The actress, who has been impressive in a number of prior features but had yet to truly leave a discernible mark, goes above and beyond here, particularly with an unforgettable “Cool Girl” monologue and a few haunting scenes best left unspoiled. The rest of the ensemble is top-notch, particularly Kim Dickens and Patrick Fugit (occasionally near-silent) as detectives who scrutinize Nick’s state of innocence, as well as Carrie Coon as Margo, Nick’s twin sister and the only person truly on his side. Tyler Perry as Nick’s well-known attorney, Tanner Bolt, is bound to surprise many with his confident presence, providing a grounded, often humorous perspective of the relatively insane events unfolding. Leading the media circus is the Nancy Grace-esque Ellen Abbot (Missi Pyle), who throws out unsubstantiated claims for America to pounce on. Fincher even finds room for the family cat to have a notable presence, evidenced by the way Nick Dunne perhaps cares more for the animal than finding his wife.

The score from Trent Reznor and Atticus Ross is more subdued than the prior composer-director collaborations, setting the early groundwork with dream-like, somewhat distracting melodies during the “she said” portions, only to lead to fitting, disconcerting spasms of noise as twists and turns are unveiled. Cinematographer Jeff Cronenweth‘s work is once again in the details, for not a single pristine shot seems arbitrary — even though, outside of a few marvelously-handled sequences, it now seems as if he and Fincher could handle this sort of material in their sleep.

Like any good satire, Fincher and Flynn exaggerate issues of marital commitment, resentment, and overall dysfunction to their absolute extremes. Much of the first half’s fun lies with these dueling perspectives, participating in an internal dialogue on which side is in the right (or more apparent in this out-of-touch world, the wrong). While the progression of events makes for a wickedly fun time, the sociopathic scales unfortunately tip and our leads get nudged into evident corners impossible to escape. However, as a lucid and riveting who-dun-it black comedy, Gone Girl makes for one of Fincher’s most purely entertaining films.