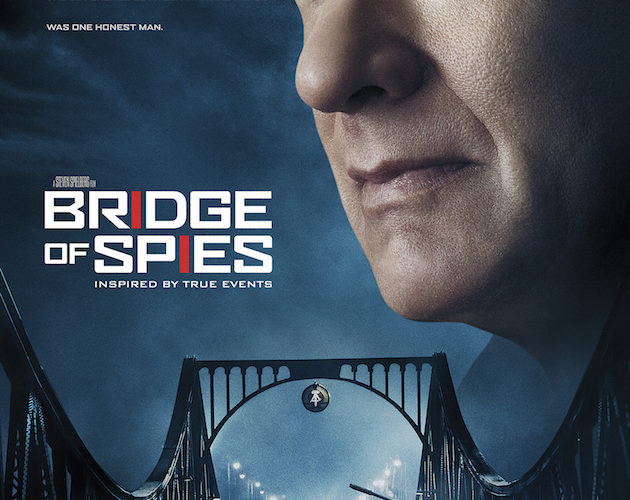 There are two sides to every conflict, and within each are intricacies and viewpoints that can cause either faction to erupt if the scales are tipped. The stakes for such a quarrel have rarely been higher than in the Cold War, a battle consisting of dueling ideologies rather than all-out warfare, one where a single word or gesture from a side could have unimaginable ripple effects. Despite the eventual outcome being apparent, Steven Spielberg rightfully found this sort of articulated combat to be ripe for drama in his latest film, Bridge of Spies.

Loosely based on a true story — with the timeline greatly condensed and more tightly intertwined — the script from Matt Charman, Ethan Coen and Joel Coen is a snappy, propulsive account of James B. Donovan (Tom Hanks), an unblemished Brooklyn lawyer who becomes involved in defending a suspected KGB agent (Mark Rylance). It shifts from a courtroom drama — although, much like the Cold War, the most compelling of conversations take place behind closed doors — to an international espionage thriller as Donovan is then sent by the CIA to a divided Berlin in order to negotiate an exchange of prisoners. From the first moment we meet Hanks, he feels more than destined for the role, negotiating an insurance claim with metaphor after metaphor in a captivating demeanor only someone of his likability could pull off so effortlessly. This is perhaps the most morally upright character in cinema since the days of Jimmy Stewart, though one wishes the fairly single-minded script fostered more of an emotional connection with his experience as a stranger in a strange land — both in his home country and in Berlin.

After he takes the case, he becomes the second-most-hated man in America — after, of course, Public Enemy No. 1: his client. This loathing can be felt in everyone, from the press to the police guarding the house to even the judge presiding over the trial, yet Donovan is virtuously determined to carry out the nation’s founding ideals of the justice system and defend his client to the best of his abilities. The inner turmoil he must have faced in the stress put upon not only his family, but himself, rarely bubbles up, eventually dulling his character.

Far more compelling is Rylance, who makes clear why Spielberg went on to cast him as the title character in his forthcoming adaptation of The BFG. His character, Rudolf Abel, primarily factors into the first half of the story and is shrouded in mystery. Yet Rylance brings forth physical ticks and gestures that keep one on edge, never outright stating his allegiance as he cheekily plays off Donovan, thus giving the character unexpected likability. The opening sequence, a thrilling footchase through Brooklyn to Manhattan and back as the government is on his tail, is the only clue we’re given regarding his loyalty.

This is of no concern to Donovan, however. “Every person matters,” he repeats throughout his journey, insisting the Constitution is the only thing that makes each American equal. Bridge of Spies is keen to lay down this humanistic viewpoint at every chance the opportunity arises, a refreshing approach of optimism in a time when both sides of the Iron Curtain had little. Spielberg’s fondness for Frank Capra and his sensibilities have been apparent in much of his work, but never more patently perceived here.

Despite underutilized appearances by Amy Ryan and Alan Alda, the rest of the ensemble is filled out by a murderers’ row of character actors, including Whiplash‘s Austin Stowell, True Grit‘s Dakin Matthews, The Knick‘s Eve Hewson, They Came Together‘s John Rue, The Wire‘s Domenick Lombardozzi, and many more. Most are relegated to a few brief scenes, but they successfully help fill out this world that seems to be balancing on a wire as the nuclear threat bubbles.

This is yet another Spielberg film shot by Janusz Kamiński, and his usual mark of consummate luster accompanies each frame. (No window is left unflooded by light.) Also re-teaming with Spielberg is editor Michael Kahn, who keeps an effective pace throughout, exemplified in crosscutting Donovan’s story with that of the pilot of a downed U-2 spy plane. There’s also a few fantastic cross-dissolves, as well as a particularly poignant cut which accentuates the effects this governmental warring has on the nation’s children. Thomas Newman, filling in for John Williams, delivers a rousing, if merely respectable score that boasts a sensibility of films from period as it evades during the film’s more emotional second half.

Credit must be given to Spielberg, who lends this story a magnificent urgency. His impeccable direction — whether it’s through extended shots as we take in the Adam Stockhausen-designed detailed environments of Donovan’s law office and the treacherous streets of East Berlin — or the ramping-up of tension as Donovan negotiates various deals, is all handled with a level of experienced craftsmanship. While there are spare exceptionally memorable sequences, Spielberg’s polished approach and expertise of progression makes Bridge of Spies mostly gripping.

Despite failing to effectively reach its intended emotional peaks, not unlike Lincoln, Bridge of Spies plays like a throwback to an earlier era of more subdued thrillers. In its greatest moments, the drama (and brief comedy) hangs on a few verbal exchanges, which one might attribute to the Coens’ melodious stylings, rather than any grand setpieces. With an overriding penchant for nobility above all, Bridge of Spies has a welcome straightforward charm despite its ultimately understated impact.

Bridge of Spies premiered at New York Film Festival and will be released on October 16.