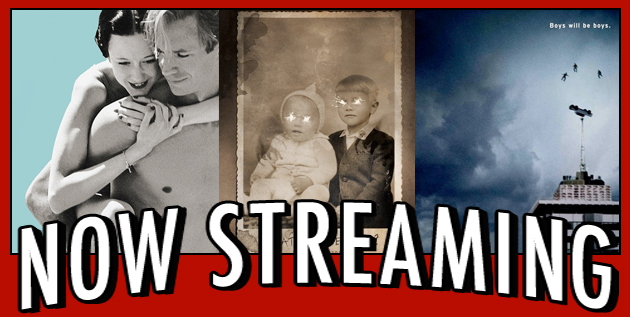 [Now Streaming] Your ‘Woman in Black’, ‘Chronicle’ and ‘W.E.’ Alternatives Each week within this column we strive to pair the latest in theatrical releases to worthwhile titles currently streaming on Netflix Instant Watch. This week we offer alternatives to Woman in Black, Chronicle and W.E.

Danielle Radcliffe leaves magic behind to tackle the role of a young father and lawyer whose skeptical worldview is shaken when he comes face to face with a vengeance-seeking ghost in James Watkins’ gothic thriller. [Teaser] The Phantom of the Opera (1925) Silent film icon Lon Chaney secured his legacy with his gut-wrenching performance as the eponymous composer of one of the world’s greatest Gothic romances. Deep within the depths of a Paris Opera house, the phantom lurks, sounding his melancholy symphonies and attempting to win the heart of opera ingénue Christine. But her love for another man will turn his passion to white-hot rage!

The Masque of the Red Death (1964) Inspired by two of Edgar Allen Poe’s twisted tales, this cult classic from Roger Corman stars horror legend Vincent Price as a masochistic master of ceremonies who tortures his guests with a string of deadly games.

The Crow (1994) Let’s ignore remake news, and focus on this badass tale of romance and revenge that spawned millions of ill-fated crushes on its beautiful and brooding star Brandon Lee, who tragically died during the film’s production. One year after Eric Draven (Lee) and his glamorous girlfriend are murdered by a malicious and mayhem-loving gang, Draven rises from the grave powered by love to reap a bloody vengeance.

What will three teen boys do when they discover they have superpowers? Aside from sexually harassing girls…manslaughter.  Michael B. Jordan, Alex Russell and Dane DeHaan co-star. [Trailer] Wolverine and the X-Men (2008) This animated action series gives the X-Men a sharp new look and a striking new angle. A horrible accident has knocked Professor X into a coma, and when he awakes 20 years in the future he discovers the world has crumbled in his absence. Using his powers he sends messages to the past working to save the future, but with Cyclops reeling from disappearance of Jean Grey, loner Wolverine is forced to take the reins of the X-Men. Storm, Kitty Pryde, and Rogue also make appearances. All 26 episodes of Season 1 are now streaming.

No Ordinary Family (2010) In this short-lived sci-fi series a family acquires super powers after surviving a plane crash. The dad (Michael Chiklis) gains super strength; the mom (Julie Benz) is now super speedy, while their teenaged daughter (Kay Panabaker) becomes telepathic and their teen son (Jimmy Bennett) gets “genius vision.” I know, it sounds lame – but hey it stars The Commish !

Being Human (2008) This British series centers on what seems like a joke. Have you heard the one about the vampire, werewolf and ghost who share an apartment? Yet this fantasy-fueled soap opera is nothing to laugh at. As a modern vampire struggles to resist his blood-sucking urges, his recently lycanthropic roomie tries to adjust to his new monthly cycle, while a perplexed ghost attempts to discover why she can’t move on. Also streaming is the (U.S.) remake. Impromptu  (1991) Hugh Grant and Judy Davis co-star as 19th century composer Frederic Chopin and transgressive (and sometimes crossdressing) novelist Baroness Amantine-Lucile-Aurore Dupin –also known as George Sand. Together they discovered an intense passion that would not be thwarted petty jealousies.

The Edge of Love (2008) This vibrant docudrama centers on the tumultuous love triangle between heralded romantic poet Dylan Thomas (Matthew Rhys) and his dueling lovers, his devoted wife (Sienna Miller) and his childhood sweetheart (Keira Knightley). Despite all odds these romantic rivals develop a deep friendship.

Why Do Fools Fall in Love (1998) This catchy biopic uncovers the lusty life of rhythm and bluse pioneer Frankie Lymon (Larenz Tate), who shocked the world not only with his early death by drug overdose but also by the revelation that he had three wives who now must battle for their piece of his estate. Tate sizzles as the sexy star, and stellar performances are turned in by Halle Berry, Vivica A. Fox and Lela Rochon. This tearjerker is compulsively watchable, and gets bonus points for having Little Richard on board, playing himself.

Portlandia (2011) Discover what all the buzz is about by making an easy marathon of the first season of Fred Armisen and Carrie Brownstein’s hipster-skewing sitcom. Though this sketch comedy show is firmly rooted in Portland, Oregon, a place apparently happily stuck in the 1990s, the pair’s goofy and transgressive comedy stylings are funny far beyond the borders of the Pacific Northwest. Whether their mocking craft culture by “putting a bird on it,” ridiculing the competitive nature of contemporary news junkies, or poking fun at the intense fanaticism of organic food enthusiasts, Armisen and Brownstein offer a welcomed sense of levity to the self-serious culture of today. It’s a guffaw-inducing comedy show that’s as smart as it is silly.