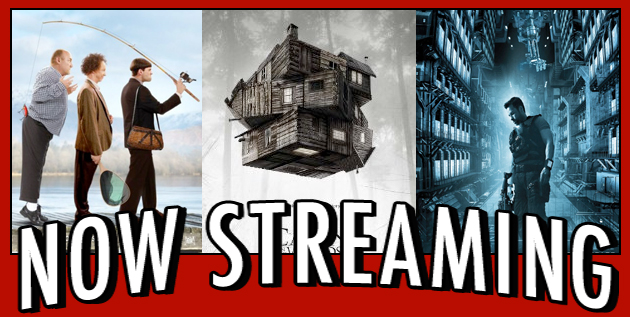 Each week within this column we strive to pair the latest in theatrical releases to worthwhile titles currently available on Netflix Instant Watch. This week we offer alternatives to The Three Stooges, Cabin in the Woods & Lockout.

The classic comedy team gets a reboot at the hands of the Farrelly Brothers. Will Sasso, Chris Diamantopoulos and Sean Hayes co-star. Laurel & Hardy: Flying Deuces (1939) One of the most critically heralded comedy double acts, Laurel and Hardy made an art out of slapstick. In this winsome misadventure they parody the war stories that were all the rage with a wacky tale of two American idiots who get caught up in a the French Foreign Legion as well as a tricky love triangle. Jean Parker co-stars.

Abbott & Costello Meet Frankenstein  (1948) In one of the world’s earliest horror comedies, Bud Abbott & Lou Costello, the comedy cutups behind “Who’s on First,” play a pair of railroad baggage clerks who come across the not-quite-dead remains of Dracula and Frankenstein’s monster! Lon Chaney Jr. and Bela Lugosi co-star.

Co-written by Joss Whedon and director Drew Goddard, this horror-thriller centers on five friends who head to a remote cabin in the woods seeking a relaxing getaway, but find a mind-bending mystery. Chris Hemsworth and Amy Acker co-star. The Evil Dead (1981) Sam Raimi helms this cult classic that has inspired hoards of horror fans and filmmakers. Here a batch of pals’ weekend retreat to a cabin accidentally leads to unleashing the evil dead! Bruce Campbell stars.

Tucker & Dale vs. Evil (2010) Tyler Labine and Alan Tudyk play this horror-comedy’s titular heroes, a pair of kindhearted rednecks who have a rough run-in with a pack of co-eds while trying to renovate their rundown vacation home in the thick of a forest with a dark history. Katrina Bowden co-stars.

Friday the 13th (1980) This slasher classic gave rise to the story of Jason Voorhees, a camper who tragically drowned thanks to some careless and sex-crazed camp counselors. Twenty years later Camp Crystal Lake reopens, but it can’t shed its dark legacy and soon its new crop of counselors begin meeting terrible ends thanks to a revenge-seeking killer. Kevin Bacon co-stars.

Guy Pearce stars as a man wrongly convicted of treason, who is offered his freedom if he can rescue the president’s daughter from an outer space prison taken over by violent inmates. Sure, why not. Maggie Grace co-stars. Gamer  (2009) Gerard Butler fronts this bonkers action adventure as a wrongfully convicted con whose only shot at freedom is offering himself as a real-life avatar for a twisted new video game craze. The premise is smart, but things go totally wacky when Michael C. Hall’s villainous game developer shows off his power as puppet masters/choreographer.

No Escape (1994) Ray Liotta stars as a military man convicted of murder whose sentence sends him to a remote island where some convicts have gone feral. Cannibals, gore and action abounds in this grisly and wild thriller. Lance Henriksen, Kevin Dillon, and Ernie Hudson co-star.

Tokyo Gore Police (2008) In this insane Japanese offering, a samurai-sword-wielding cop is the world’s only defense against the rising hoard of mutated humans spawned from a mad scientist’s twisted experimental virus gone wild. Warning: this one gets really weird. Love and Other Disasters (2006) Brittany Murphy stars in this charming ensemble rom-com about a bunch of friends trying to make sense of love, sex and romance. Murphy plays Jacks, an American in London, fascinated by fashion and interning at U.K.’s Vogue. She shares her flat and Holly Go-Lightly approach to life with her best mate, Peter, a gay screenwriter in search of his muse…and a boyfriend would be nice. Enter the very sexy Argentinian, Paolo. Jacks finds him lovely, assumes he’s gay and so sets him up on a blind date with Peter. As you can imagine, things get complicated, but the cast is so endearing and full of charisma that they elevate the hockey material, making Love and Other Disasters a sort of spunky sister flick to Love Actually. It’s a lesser known Murphy effort, but by far one of her most vibrant.