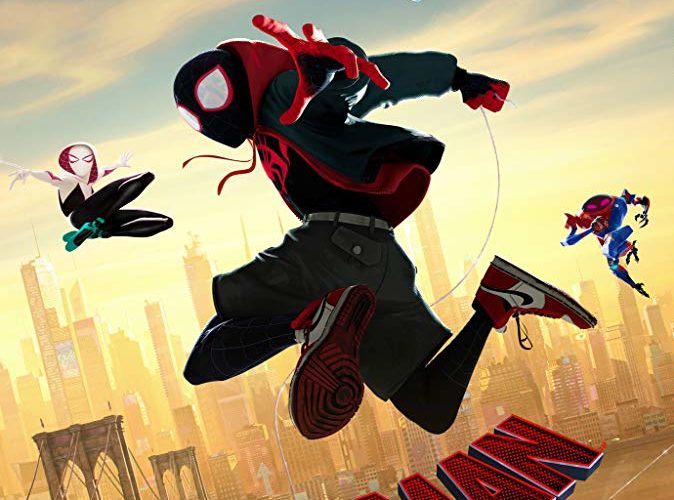 Review: ‘Spider-Man: Into the Spider-Verse’ Sets a Dazzling Benchmark for Superhero Films

For anyone still invested in big-budget Hollywood studio films that foreground original voices and singular visions, the glut of superhero movies represent something of an existential threat. Since it doesn’t make fiscal sense for companies like Marvel and DC to allow artists to hijack their expensive tentpoles with off-brand ideas, these IP-sourced comic book films are akin to watching trains run on time. Actors hit their marks, the effects team delivers their work on schedule and within budget, the direction remains incoherent yet relatively passable, and occasionally, pure spectacle seeps through. It’s difficult for me not to be cynical about this blockbuster normal, and while I have little interest in pissing on the parade for those who view these bloated media franchises as nice escapist entertainment worth the $15 ticket price, it also bothers me that these movies never try to look or sound substantially different than their peers. Superhero films aren’t really a genre that allows for fluidity of expression, but rather a neat metaphor for the immovable superstructure that absorbs us all.

With that said, Spider-Man: Into the Spider-Verse is the best argument for the near-constant proliferation of superhero films since Sam Raimi’s Spider-Man trilogy, and, at key moments, forced me to genuinely reconsider my pessimistic attitude. Directed by Bob Persichetti, Peter Ramsey, and former Late Show with David Letterman head writer Rodney Rothman, Spider-Verse embraces the visual language of comic books to tell a familiar story with a twist. It never once tries to reinvent the wheel, or show it off from a new angle, or try to prove that it’s actually not a wheel but something even better. Instead, it just gives the wheel a deep clean and demonstrates that the old thing works great.

Written by Phil Lord and Rothman, Spider-Verse correctly assumes cultural familiarity with Spider-Man’s origin story (nerdy teenager, radioactive spider bite, discovering powers as transparent metaphor for puberty, etc.) and proceeds to unpack it then turn it sideways. Mike Morales (Shameik Moore), average Brooklyn biracial teenager shuffled off to a fancy private school by his cop father (Brian Tyree Henry), lives in a universe in which Spider-Man remains a popular, visible fixture. One night, a radioactive spider bites Morales while he tags walls with his persona-non-grata uncle (Mahershala Ali), sending him into a physical and existential frenzy that forces him to seek out the real Spider-Man (Chris Pine). Unfortunately, Kingpin (Liev Schreiber), a hulking Big Bad, kills Spider-Man before he can help out Morales, but not before he opens a portal to multiple dimensions.

The portal provides the film with its namesake and its raison d’être. Morales meets a parallel Spider-Man (Jake Johnson) who has fallen on hard times following the dissolution of his marriage with Mary Jane. (Johnson brings his patented sad-sack charm to the role, but if Tobey Maguire were cast in his place, which the directors considered, the film would have been much more emotionally potent for obvious reasons.) Soon, Morales meets a whole host of parallel Spider-Men—Gwen Stacy (Hailee Steinfeld); hardboiled Spider-Noir (Nicholas Cage, having so much fun playing his take on Bogey); anime Peni Parker (Kimiko Glenn); and Porky Pig-inspired Spider-Ham (John Mulaney)—who must band together to stop Kingpin from destroying the world and return to their original dimensions before it’s too late. All the while, Morales must prove to himself and others (but mostly himself) that he’s capable of taking up the mantle from his universe’s Spider-Man.

Again, Spider-Verse doesn’t reinvent the wheel, and a lot of the narrative beats are gussied-up versions of standard superhero plotting. There are betrayals, obvious reveals, end-of-the-world stakes, and a capital-B Big climax that simultaneously ties up the plot and pays off the established character arcs and themes. Yet, Spider-Verse imbues the familiar with infectious cheer and plays off the audience’s knowledge of Spider-Man/genre tropes without playing Deadpool’s snark-the-reference game. It helps that Lord and Rothman’s confident, fast-paced script eschews any and all unnecessary exposition, foregrounds jokes, and takes seriously the sincere emotional underpinnings of the Spider-Man story without devolving into saccharine nonsense. Plus, the Morales character feels like the best version of what a 2018 Peter Parker would look like: casually diverse, anxious and insecure but not toxically so, witty, earnest, and eager to do good despite not knowing how. Lord and Rothman, plus Moore’s voice performance, make it easy to be invested in his development, which should be a base-level requirement for these movies. So many superhero films fail to deliver on the promise of a Compelling Protagonist that it knocks you back when you actually see one.

The main attraction, however, is Spider-Verse’s animation, which immerses you in a dazzling comic-book aesthetic inspired by the work of many artists over Spider-Man’s five-decade history, including and especially Sara Pichelli, who co-created the Morales character in 2011. Employing 142 animators, the largest crew ever used by Sony Animation, Spider-Verse combines computer animation with traditional line-drawing techniques to engender the feeling of a three-dimensional comic book. This would be an achievement unto itself, but Persichetti/Ramsey/Rothman never once sacrifice spectacle for coherency, choreographing action sequences within the layers of effects and color work. In every single frame, Spider-Verse proves once and for all that animation remains the best medium for superhero films, as the mutable style best fits the source material’s fantastical nature. For all the talk about “adult” superhero stories, Spider-Verse visually, narratively, and emotionally feels like the most mature superhero film in a long while because it embraces its literary heritage, not just its mythology.

Take it from someone who never thought he could ever be pushed to care about Spider-Man again in 2018, Spider-Verse feels fresh precisely because it breathes new life into an old story without abandoning the basics. It’s difficult to make such an old canard like “with great power comes great responsibility” have new meaning, but Spider-Verse goes above and beyond the call of duty not by preaching the cliché but by assuming its implications. A late-period pep talk from Morales’ father communicates that ideology in such emotionally direct layman’s terms that it caught me by surprise. But even if the film didn’t do the work to prop up those ideas, the scene of Morales and parallel Spider-Man clumsily swinging through New York made me feel the same way when I first saw this scene way back in 2002. That’s no easy feat.

Spider-Man: Into the Spider-Verse opens on December 14.