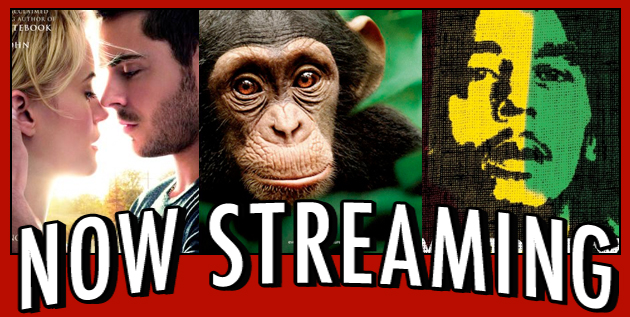 Each week within this column we strive to pair the latest in theatrical releases to worthwhile titles currently available on Netflix Instant Watch. This week we offer alternatives to The Lucky One, Chimpanzee & Marley.

Zac Efron fronts this Nicholas Sparks’ drama about a Marine who, upon returning from his tour of duty in Iraq, goes in search of the unknown woman he believes was his lucky charm. Taylor Schilling co-stars; Scott Hicks directs. The Messenger (2009) In this acclaimed indie drama Woody Harrelson and Ben Foster play a pair of vets assigned the emotionally devastating duty of informing military family’s of a soldier’s death. Harrelson earned an Oscar nod for his heartbreaking portrayal of an alcoholic soldier in search of meaning. Samantha Morton and Steve Buscemi co-star; Oren Moverman directs.

Brothers (2009) In this devastating drama based on Susanne Bier’s Danish Brødre, Tobey Maguire plays a vet tormented by the trauma he experienced on duty in Afghanistan. He returns home to find his wife (Natalie Portman) has grown discomfortingly close to his screw-up brother (Jake Gyllenhaal) putting further strain on his tenuous ability to cope.

This Disney-produced documentary reveals the captivating story of Oscar, a young chimp whose survival is called into question when he is accidentally separated from his family. But Oscar finds a new home when he crosses paths with a lone, fully grown male chimpanzee. Tim Allen narrates. Planet of the Apes (1968) This sci-fi classic turns the tables by putting apes at the top of the pecking order, with humans subservient as grunting slaves. Charlton Heston stars as an ornery astronaut bewildered by this strange world where apes rule. Roddy McDowall co-stars, Franklin J. Schaffner directs.

Congo (1995) Based on the Michael Crichton novel, this adventure puts a pack of human explorers and a domesticated gorilla who can use sign language in the midst of a dangerous jungle where a far fiercer species rules. Before you laugh off this goofy and gory action flick, let me tell you why it’s better than you remember. First off, Ernie Hudson is awesome as a smug guide, unimpressed by the white folk he leads into the wild. Second, future Academy nominees Laura Linney, Grant Heslow, and John Hawkes all make appearances, and the screenplay was penned by heralded playwright John Patrick Shanley. It’s a magnificent failure that’s incredibly fun to watch. Frank Marshall directs.

Project X (1987) Want something more family friendly? Matthew Broderick stars in this military adventure about an Air Force screw-up who seeks to rescue a sweet chimpanzee at the center of military testing. Helen Hunt co-stars as a primate expert; Jonathan Kaplan directs. Rock out with your doc out!

Pearl Jam Twenty (2011) The alternative rock band Pearl Jam was on the forefront of the 90s grunge explosion, and has managed to stay together through the ever-changing tide of popular music. Directed by Cameron Crowe, this doc celebrates the bands 20th anniversary by recounting their incredible journey, warts and all through never-before-seen material culled from 1,200 hours of footage that captures the band from all perspectives.

I Am Trying to Break Your Heart  (2002) Photographer turned documentarian Sam Jones reveals the tumultuous path it took experimental rock band Wilco to create their fourth album, Yankee Hotel Foxtrot. He demystifies the glamour of the rock star lifestyle by focusing on the real work behind the music. Melancholia (2011) For provocateur cinema at its best, it’s hard to beat Lars von Trier. In this film, he brings all his talent, bombast, and passion to bear on the story of the earth being threatened by the appearance of a rogue planet. Kirsten Dunst won Best Actress at Cannes for her portrayal of an emotionally and psychologically shattered young woman dealing with the impending end of all life, and it’s hard to argue with that judgement after seeing the results. A perfect counterpoint to more action oriented cinematic fare, Melancholia will outrage some and delight many more with its outlandish style, uncompromising performances, and stirring finale.