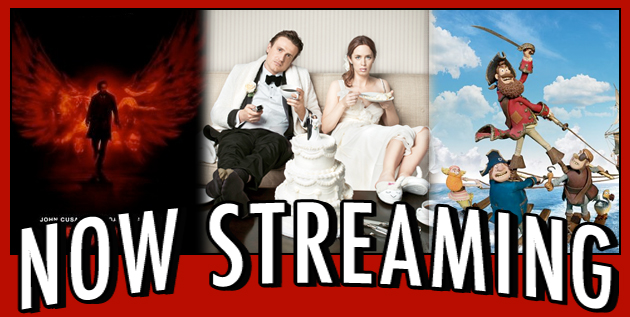 [Now Streaming] Your ‘Five-Year Engagement,’ ‘The Raven’ and ‘The Pirates! Band of Misfits’ Alternatives Each week within this column we strive to pair the latest in theatrical releases to worthwhile titles currently available on Netflix Instant Watch. This week we offer alternatives to The Five-Year Engagement, The Raven and The Pirates! Band of Misfits.

Jason Segel co-stars with Emily Blunt in a comedy he penned with Nicholas Stoller that follows the bumpy journey of one couple from the proposal to the wedding day. Chris Pratt & Alison Brie co-star. Longing for some R-rated rom-coms:

Then She Found Me (2007) Helen Hunt stars as a woman whose husband (Matthew Broderick) walks out when she decides to adopt. Then she discovers the identity of her biological mother (Bette Midler) and meets the man of her dreams (Colin Firth, major upgrade.) But things get tricky when she discovers she’s pregnant with her husband’s baby.

Frankie and Johnny (1991) Scarface co-stars Al Pacino and Michelle Pfeiffer re-team for this unlikely tale of love based on Terrence McNally’s off-Broadway play about two middle-aged people whose unlikely romance begins after a passionate one night stand. Garry Marshall directs.

Lucky (2011) For something a little wilder, try this killer rom-com that stars Colin Hanks as a man whose lucky lottery ticket not only wins him the gold digger of his dreams (Ari Graynor) but also fuels his homicidal ambitions. Ann-Margret and Jeffrey Tambor co-star.

John Cusack stars as Edgar Allan Poe in a twisted murder mystery loosely based on the author’s peculiar final days. Edgar Allan Poe’s Tales of Terror  (1962) Three classic Poe tales (The Black Cat, Morella and The Case of M. Valdemar) are presented, bolstered by appearances from  Vincent Price, Peter Lorre and Basil Rathbone. Pair with The Pit and the Pendulum for a deeply creepy double feature.

Alfred Hitchcock Presents (1955) The modern master of the macabre, Alfred Hitchcock, offers a bevvy of twisted tales with a deathly dark sense of humor, studded with stars and penned by an cadre of incredible writers including Ray Bradbury, Robert Bloch and Dorothy L. Sayers. Seasons 1-3 are now streaming.

Hugh Grant lends his voice to a wacky sea captain seeking to best his rivals at plundering to win the coveted Pirate of the Year Award. Salma Hayek and Jeremy Piven co-star. Wallace & Gromit: Loaf and Death  (2008) For more from Aardman Animations, check out this Oscar-nominated stop-animation short wherein the dopey Wallace and his loyal dog Gromit open a bakery and inevitably get entangled in a murder mystery. If you can’t get enough of this daffy duo, pair this with Wallace & Gromit in Three Amazing Adventures.

Rango (2011) Johnny Depp lends his voice to Gore Verbinski’s computer-animated adventure of a chameleon would can’t help but stand out. A house pet accidentally set free among a brutal dessert, he soon finds himself in a critter community under siege by draught and creates a tough guy identity to give him mystique. Isla Fisher and Abigail Breslin co-star.

Rock-A-Doodle (1991) This hand-drawn offering from Don Bluth is a little bit country and a little bit rock n’ roll, featuring a rooster who leaves his farmland home behind after being shamed by an evil owl, and finds fame in the big city as a hip-swinging crooner in the style of Elvis Presley. But without his song, the sun won’t rise and the family farm is thrown into darkness, so it’s up to a motley band of animals to get him back and save the day. Vincent & Theo (1990) In between the critical fiasco that was the live-action Popeye and his “comeback” in the form of the scathingly hilarious Hollywood satire The Player, the late, great Robert Altman worked steadily in American and European TV and film. One of the best of the bunch is this biopic of the legendary Dutch painter Vincent Van Gogh (Tim Roth, in arguably his greatest performance), based on Van Gogh’s letters to his art dealer brother Theo (Paul Rhys) during his later years. The film is a powerful look at the relentless creative energy of the great artist. Cameron Crowe once said that most rock films fail to capture the musicians’ love of the music. Most films about artists (The Girl with the Pearl Earring, for example) are generally stilted, dull affairs – not this one. Roth and Altman – working from a sharp, incisive script by Julian Mitchell – capture the quiet intensity and roaring excess of the painter, who rails against his brother’s bourgeois trappings while relying on his allowance to keep working. This is a far more structured film than many of Altman’s more improvisation-oriented projects, and that level of focus reveals a unique understanding of Van Gogh’s genius. It’s a hypnotic, revelatory experience.