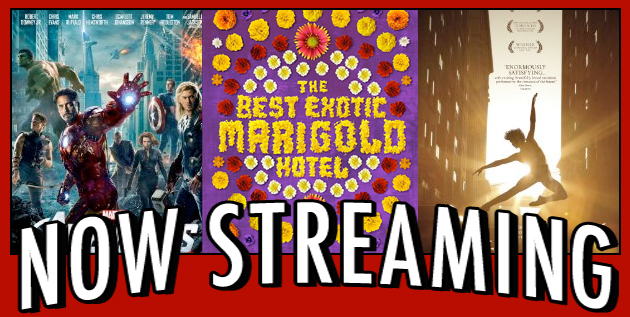 Each week within this column we strive to pair the latest in theatrical releases to worthwhile titles currently available on Netflix Instant Watch. This week we offer alternatives to The Avengers, The Best Exotic Marigold Hotel & First Position. How about giving some lesser-known superheroes their due:

Confessions of a Superhero (2007) This quirky and compelling documentary follows four dreamers whose passion to become professional actors has landed them all on Hollywood Boulevard costumed as Superman, Wonder Woman, Batman, and the Incredible Hulk. Matt Ogens directs.

Big Man Japan  (2007) This Japanese mockumentary explores the downside to being a superhero. Daisato is a middle-aged, second-rate superhero who not only must do battle with a bizarre batch of monsters, but also has to deal with neighbors annoyed by the destruction his job entails, his super-powered family who is of unimpressed by his efforts, and an agent pressing him to sellout. Hitoshi Matsumoto directs.

The Tick (2001) While the Avengers assemble, the Tick and his team prefer to hang out at the local diner. Patrick Warburton stars as the big blue lummox with an insatiable thirst for justice! This live-action series based on the peculiar cartoon is so thoroughly bizarre, it’s almost too good to be true. Davis Burke, Liz Vassey, and Nestor Carbonell co-star.

Based on the novel These Foolish Things, this drama centers on a batch of British retirees who travel to India to take up residence in what they believe is a newly restored hotel. Less luxurious than promised, the Marigold Hotel nevertheless begins to charm in unexpected ways. Judi Dench, Bill Nighy and Maggie Smith co-star. John Madden directs. Why read these dramas when you can watch them?

The Way (2010) Based on Jack Hitt’s Off the Road: A Modern-Day Walk Down the Pilgrim’s Route, this road trip tale stars Martin Sheen as a elderly father who heads abroad to reclaim the body of his estranged son who died while hiking the Camino de Santiago route in the Pyrenees. Once there, he finds the best way to deal with his grief is to finish the pilgrimage his son started. Emilio Estevez directs.

Atlas Shrugged: Part 1 (2011) Taylor Schilling stars as powerful railroad executive Dagny Taggart in this dedicated telling of Ayn Rand’s controversial bestseller. When her business is threatened Taggart does whatever possible to save it, no matter the personal costs.

Miral (2011) Based on Rula Jebreal’s first novel, this drama unfolds the story of a kindhearted Palestinian woman who founded an orphanage to house refugees of the Arab-Israeli War. Frieda Pinto stars as the title character, who is drawn into a world of conflict when she falls for a charismatic political activist. Julian Schnabel directs.

This documentary follows six young dancers as they prepare for one of the most prestigious ballet competitions in the world, the Youth America Grand Prix. Bess Kargman directs. Mao’s Last Dancer (2010) Based on Li Cunxin’s autobiography, this sweeping drama unravels his ascent from an 11-year-old peasant to a student at Madame Mao’s Beijing Dance Academy to one of China’s most celebrated ballet dancers, and beyond. Bruce Beresford directs.

Ballet Shoes (2007) For something lighter, this enchanting family movie centers on three little girls whose poverty promises them little future to speak of. But once a dance and acting academy opens that offers scholarships to impoverished students with potential, Pauline, Petrova, and Posy are offered a marvelous chance to pursue their dreams. Emma Watson, Yasmin Paige and Lucy Boynton co-star. Amadeus (1984) I recently revisited Milos Forman’s Oscar-winning adaptation of Peter Shaffer’s heralded Broadway play and found it to be even more intoxicating than I remembered. This dark yet spirited drama famously re-imagines the life of Classical composer Wolfgang Amadeus Mozart as being subject to the cruel and envy-inspired manipulations of the less regarded Antonio Salieri. Shaffer, who also adapted the screenplay, uses the famous figures to create a story of devotion, jealousy and murder that is as captivating as it is unnerving. F. Murray Abraham won an Oscar for his impeccable performance of Salieri, a man who devotes himself to God in hopes he will be rewarded with a transcendent musical talent. Chaste, stern, and entirely disciplined—save for the odd indulgence in chocolate—Salieri’s worldview is thrown for a loop when he meets Mozart (Tom Hulce in his best-known performance), a crude man who giggles, gropes and generally acts like an absolute ass, but possesses the most incredible composing abilities ever seen. Enraged that his devotion’s brought him nowhere near this kind of talent, Salieri sets out to destroy Mozart with a plan so fascinatingly winding and devious that I sort of wished it were true.