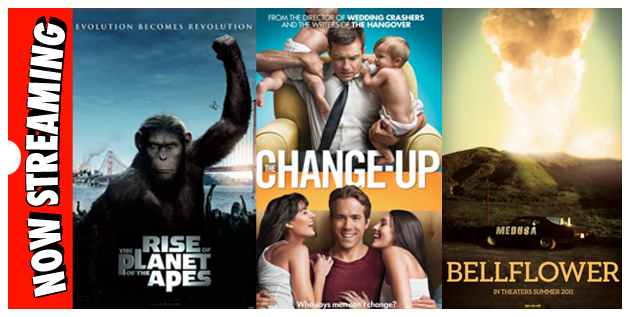 [Now Streaming] Your ‘Rise of the Planet of the Apes,’ ‘The Change-Up’ & ‘Bellflower’ Alternatives This week: man’s hubris is rewarded with animalistic vengeance; his wishes granted and his worse fears realized in three wild features. If all this madness makes you hunger for more mad scientists, magic body-swaps, and muscle cars, we’ve got you covered with an array of fun features that are now streaming.

The Rise of the Planet of the Apes

Serving as prequel to The Planet of the Apes‘ franchise, Rupert Wyatt directs this tale of science gone wild. James Franco stars as a noble scientist whose efforts to inject an ape with a super-intelligence formula ultimately leads to the downfall of humanity and the rise of – well you know. John Lithgow, Frieda Pinto and Andy Serkis co-star. The Bride of Frankenstein (1935) For some old-school flare and scares, take in the sensational sequel to James Whale’s striking Frankenstein. Here the repressed doctor reunites with his former mentor, the strange Dr. Pretorius, who urges Dr. Frankenstein to embrace his experimental nature and make his poor, lonely monster a friend – a re-animated bride. With its iconic imagery and spirited special effects this sequel is sure to excite modern audiences just as it did back in the 1930s.

Them! (1954) A classic cult favorite, this campy horror flick comes from a time where fear of nuclear war and atom bombs overrode our national paranoia, resulting in a plethora of movie monsters made from radiation! Often, these creatures were overgrown bugs, and here it’s a pack of giant ants that terrorize a small Southwestern town.

The Fly (1986) In this deeply creepy remake of the 1958 original, Jeff Goldblum plays a man whose pioneering work on a transportation device melds his DNA with that of a housefly, steadily transforming him into a gruesome monster. Geena Davis co-stars.

Jason Bateman is an overtired husband and father; Ryan Reynolds is an oversexed playboy and cad – that is until a little late night drinking leads to some good ol’ fashioned body-swapping shenanigans! (Little tip: Never piss in a wishing fountain.) Olivia Wilde and Leslie Mann co-star in this raunchy comedic romp. Want more? Try these body-swapping comedies on for size:

18 Again (1988) George Burn stars in this quirky comedy in which an octogenarian magically swaps bodies with his college-bound grandson. While bringing some old school flare to frat parties and track meets, Burns learns being young isn’t as easy as it used to be. Charlie Schlatter and Pauly Shore co-star.

Prelude to a Kiss (1992) In this sentimental rom-com, Alec Baldwin and Meg Ryan fall in love fast. But their runaway romance runs off the rails when a wedding day wish swaps his bride with an old man seeking a second chance! Patty Duke and Stanley Tucci co-star in this poignant tale of longing and loneliness.

The Hot Chick (2002) If you like your comedy broad and crude, then this body-swapper featuring Rachel McAdams and Rob Schneider is for you. Thanks to some shoplifted tribal jewelry, this mean girl awakes to find her fine form replaced with that of a hairy con man. Anna Faris co-stars as a sexually perplexed bff.

In this SXSW hit, a group of hipsters make love and war while dreaming of the apocalypse in a whiskey-spouting muscle car. Mad Max (1979) The inspiration for the Mother Medusa gang, this action flick featuring a young Mel Gibson is set in a postapocalyptic world, where vengeance and honor go hand in hand.

Cobra (1986) Sylvester Stallone stars as a vigilante cop, tirelessly tracking a brutal serial killer called, “The Night Slasher” in his 1950 Mercury modeled after one Stallone himself once owned.

The Gumball Rally (1976) In this car-crazy comedy, a pack of wannabe racers compete in an absurd rally with a mania-inducing prize! As packed with notable names as it is classic cars, this flick is sure to bring up testosterone and endorphin levels. Gary Busey and Raul Julia co-star. Johnny Dangerously (1984) Best-known for her classic high school comedies, Fast Times at Ridgemont High and Clueless, director Amy Heckerling has a developed well-deserved reputation as a keen comedy-crafter. In this lesser-known gem, Heckerling parodies the best of ’30s gangster flicks with a ribald sense of humor. Michael Keaton stars as gangster Johnny Dangerously, a man so devoted to his mother (Maureen Stapleton) that he falls into the world of bootlegging and gang violence to pay for her never-ending need for operations. Along the way, he  squares off against his prosecutor brother (Griffin Dunne), falls for a knock-out nightclub singer (Marilu Henner), incurs the wrath of a gun-happy rival (Joe Piscopo) and even garners the pope’s blessing. Peter Boyle, Danny DeVito and Ray Walston co-star in this wild tale of decadence, prison grape-vines, shelf-paper-aided getaways and meta humor.