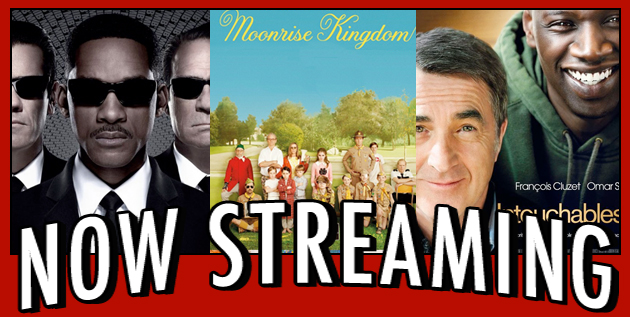 [Now Streaming] Your ‘Men in Black 3,’ ‘Moonrise Kingdom’ and ‘The Intouchables’ Alternatives Each week within this column we strive to pair the latest in theatrical releases to worthwhile titles currently available on Netflix Instant Watch. This week we offer alternatives to Men in Black 3, Moonrise Kingdom and The Intouchables. The Adventures of Buckaroo Banzai (1984) For something even stranger, try this cult comedy that centers on a multitasking hero who is not only a physicist, neurosurgeon, and secret agent but also a rock star who battles evil aliens invaders from another dimension! Peter Weller and John Lithgow co-star; W.D. Richter directs.

The Host  (2006) For something darker, check out Bong Joon-ho’s incredible monster movie. There are no aliens in here. Instead, deep in Seoul’s River Han there’s a giant squid-like mutant born from a toxic blend of pollution. When it barrels out of the water and snatches up a kind-hearted schoolgirl, her family of screw-ups–led by her dopey grandfather–set out to save her. Hie-bong Byeon stars.

Wes Anderson applies his pastel-colored paintbrush to the tale of two young lovers who’ve run off into the freedom the wilderness of New Penzance affords. Bill Murray, Bruce Willis and Edward Norton co-star. Yearning for more colorful and quirky tales of love?

Submarine (2011) Anderson’s works are a clear influence on Richard Ayoade’s directorial debut which focuses on the coming-of-age of 15-year-old Oliver Tate, an odd young man obsessed with a destructive bad girl as well as saving his parents’ troubled marriage from dissolution.  [My Full Review]

Punch-Drunk Love (2002) Adam Sandler takes a rare dramatic turn in Paul Thomas Anderson’s candy-colored rom-com that centers on the fragile but lovely romance that evolves between a rage-filled businessman, plagued by seven pushy sisters and a relentless trio of thugs, and the lady love who offers the promise of a better life. To be with her, he’ll do whatever it takes, be it taking on an screaming extortionist or buying pudding in bulk. Emily Watson and Philip Seymour Hoffman co-star.

Based on true events, this inspirational French drama focuses on the unlikely friendship that formed between a wealthy man embittered by the paralysis of his limbs, and a petty thief-turned-tough love caregiver. See what the critics are heralding, and what’s inspired the soon-to-shoot American remake. La Cage aux Folles (1979) This campy family comedy that was the inspiration for 1996’s The Birdcage  centers on a unconventional set of parents, who are doing their damndest to do right by their son: namely masquerading as a “normal” couple. Renato owns a drag club, where his lover Albin is the star attraction. When their son comes home with news he’s marrying the daughter of an ultra-conservative couple, these fabulous fathers are forced to play it straight in this hysterical farce. Ugo Tognazzi and Michel Serrault co-star; Edouard Molinaro directs.

Heartbreaker (2010) In this high-concept romantic comedy, Romain Duris stars as a professional heartbreaker. That is, he’s a con man contracted to split up couples if the price is right. However, all that changes when he meets Juliette, an enchanting bride-to-be who makes him question his unconventional career. Vanessa Paradis co-stars; Pascal Chaumeil directs. Working Title Films has the rights to its brewing remake.

Rapt (2009) In this intense thriller, Yvan Attal stars as a kidnapped industrialist held for the lofty ransom of 50 million Euros. He’s left to figure out his own escape plan when the price proves too high. Pascal Chaumeil directs, but Danish director Susanne Bier is set to helm its British remake. Drive (2011) Now is your chance to check out one of the most talked about films of last year. Nicolas Winding Refn‘s stunt driver-centered drama riled misled moviegoers who expected a Fast & Furious-styled action movie, but thrilled critics who were in awe of its interplay of dark and light elements. Memorably, most of this flick’s award season buzz surrounded comedian Albert Brooks who took on a rare dramatic turn as a merciless gangster; however, his is not the only stellar performance in this moody piece. Ryan Gosling stars in a role that should have received more notice on the award circuit as he pulled off a nearly dialogue-free performance as a noble loner who is not afraid to get his hands dirty. In a lesser actor’s hands this steely protagonist would have been flat, but Gosling brings heat and depth to a hero who is not even granted a name. But be warned, despite the sentimental romance at the films core–between Gosling’s “driver” and a pretty young mom played by Carey Mulligan—Drive is punctuated with moments of extreme and shocking violence. It’s fantastic, and romantic, but not necessarily a date night movie.