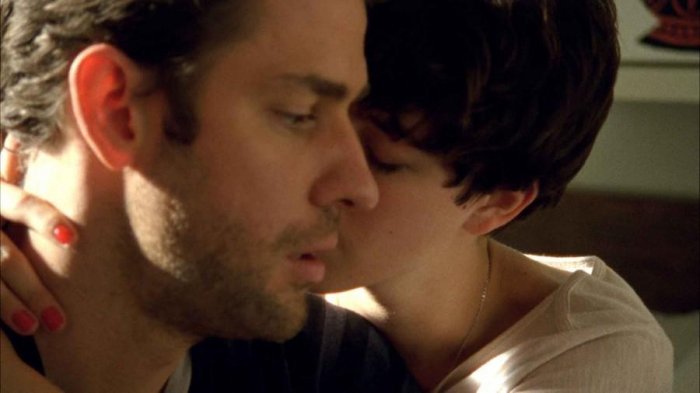 Just earlier this year at Sundance, the name Lena Dunham mostly brought to mind her divisive debut feature Tiny Furniture, but flash forward to now and the young talent has a successful TV show with Girls, one just as equally polarizing, but on the expanded platform of HBO. Back in Park City she premiered Nobody Walks, a drama co-written with director Ry Russo-Young, and now it’s seeing a release this fall.

We’ve got the first trailer for the film, led by John Krasinski and Olivia Thirlby, which looks to be wrapped up in themes of infidelity. A far cry from his portayal on The Office, I always appreciate when Krasinski steps out of his box in more dramatic roles — something will see hopefully later this year in his Gus van Sant-directed Promised Land with Matt Damon. Here he battles the temptation of a relationship with Thirlby, alongside his wife, played by Rosemarie Dewitt, who is also dealing with issues herself. With a talented cast and some positive buzz out of the festival, one can check out the trailer below via Apple. Martine, a 23-year-old artist from New York, arrives in Los Angeles to stay in the pool house of a family living in the hip and hilly community of Silver Lake. Peter, the father, has agreed to help Martine complete sound design on her art film as a favor to his wife. Martine innocently enters the seemingly idyllic life of this open-minded family with two kids and a relaxed Southern California vibe. Like a bolt of lightning, her arrival sparks a surge of energy that awakens suppressed impulses in everyone and forces them to confront their own fears and desires. Exquisitely orchestrated by Ry Russo-Young (You Won’t Miss Mescreened at the 2009 Festival) and cowritten by Lena Dunham (Tiny Furniture), this potent charting of inner urges and sufferings links characters in an intricate dance of lust, denial, and deception.