New to Streaming: On the Rocks, Borat 2, The Witches, American Utopia & More 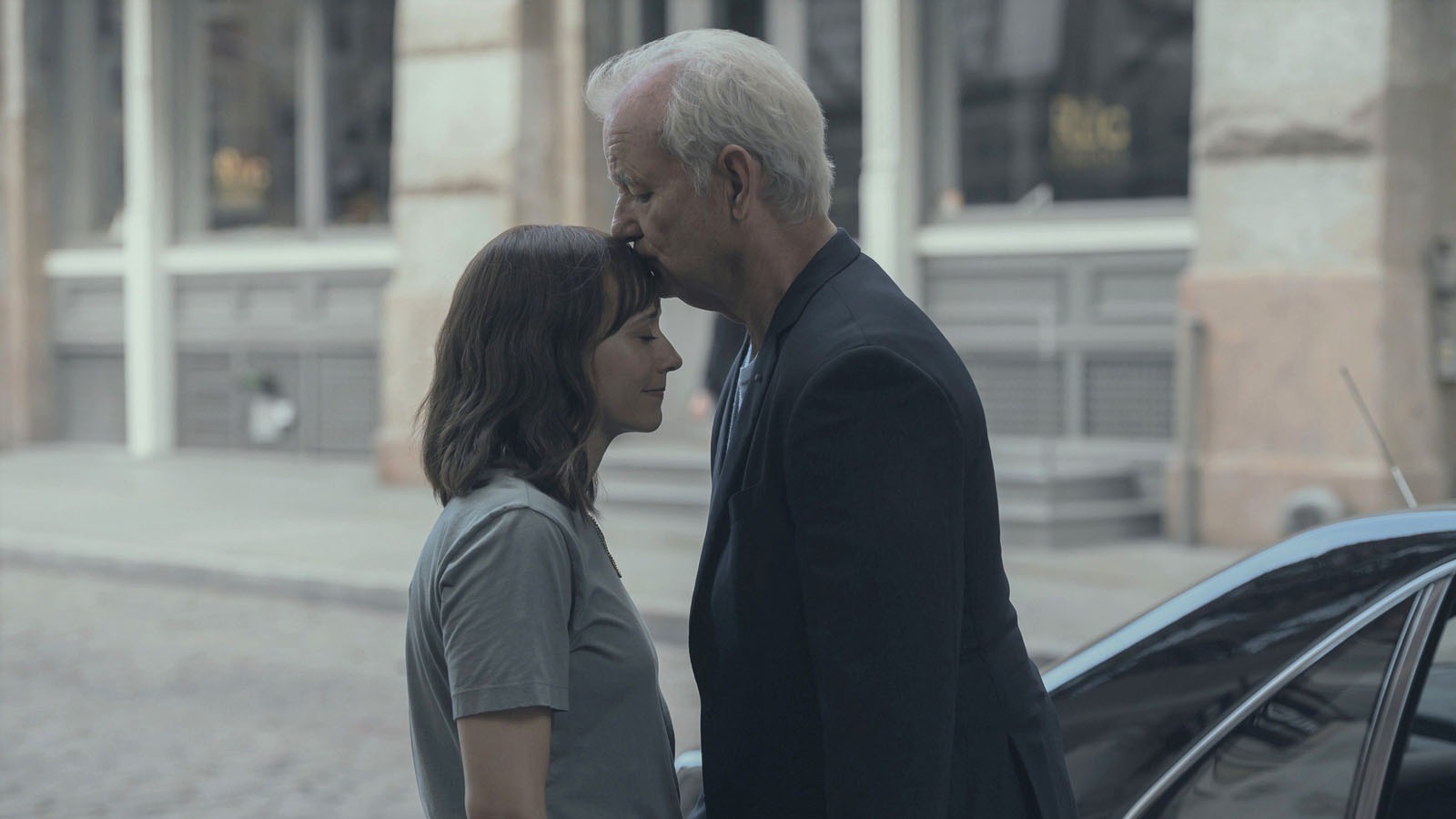 A cocked eyebrow might be the ideal lens for watching David Byrne’s latest project, American Utopia, or at least key into where he’s leading with that title. A sensation nearly the second it hit Broadway last fall, the show offered 20 faithful renditions––from Talking Heads catalog to present-day output—by a coterie of players hailing from around the globe, a fact Byrne will, between songs, use to argue for the importance of immigrants. He’ll also pause to promote voting (also an opportunity to lightly chide this crowd for not participating in local elections). And again to discuss fascism (no names mentioned, all of us thinking the same thing). One number is accentuated with a kneel directly homaging Colin Kaepernick. Because American Utopia cannot simply be musical theater: interplay between song and sermon lets its star offer perspectives with which few in this audience are wont to disagree. These asides are wholly well-intentioned, sometimes well-pointed, and frankly embarrassing. I hate asking him to shut up and sing, but preaching to the small, demographically skewed choir—largely white and middle-aged, so far as you can see into the front row for which tickets had a $300 floor—on this dire American epoch often renders Utopia vividly out-of-touch. It’s an agent of social change much in the way income equality might be achieved via Reaganomics. – Nick N. (full review)

In the six years since first hitting Park City, Justin Simien has had a modest, successful career. His debut feature, Dear White People, swiftly got picked up and hit American theaters in the fall of 2014 to more than quintuple its budget. It was messy, sure, but it had a lot of its mind and energy to spare. In fact, it had so much that it was able to spawn an adaptation in the form of a Netflix series, and as that heads into its fourth and final season, it would appear that Simien is looking ahead while also dipping into the past. – Matt C. (full review)

Maybe that’s the single biggest problem with resurrecting Borat in 2020: his power to coax out dark secrets of the American psyche for the sake of comedy is compromised when they’re no longer secret and no longer funny. Cohen has always maintained that the social value of his comedy lies in exposing hidden ugliness in the American id, but by turning the same approach on the openly id-driven Trumpist right as Bush’s “compassionate conservatives,” he’s no longer participating in any real comic sport. American social conservatives no longer make any serious attempt to hide their ugliest or craziest beliefs, so getting them to say and do ugly or crazy things on camera is no longer a comedic “gotcha!” moment. Cohen and Nowak’s antics do provoke plenty of stark responses, to be sure, but not all of them make for equal comedy. An unexpected Nazi salute from a right-wing protest attendee is a full-force “holy shit” moment, but hearing (supposed) QAnon believers proclaim exactly the outlandish things about demonic vampire pedophile Democrats we already know them to believe has little comic impact—these guys aren’t hiding it! – Eli F. (full review)

Crazy Rich Asians having opened the spigot on the previously untapped audience for Asian-diasporic considerations of family and multicultural identity, Joy Luck Club director Wayne Wang arrives with Coming Home Again, adapted with Chang-rae Lee from the latter’s New Yorker essay about home cooking and bittersweet nostalgia. A film that will surely be misleadingly marketed as a heartachy children-of-immigrants story, Coming Home Again is authentically a real weird one: Wang, flexing formalist muscles that have atrophied considerably since the early stages of his career, has made his 15:17 to Paris. – Mark A. (full review)

It’s fair to say that one of the most common genres dominating the American independent film realm is the coming-of-age film. From present-set, relentlessly up-to-the-date affairs to more nostalgic evocations, they have formed a considerable contingent, manifesting themselves even in some of the most heralded films of the past decade. With that saturation, however, tends to come a feeling of weary familiarity, as the same base concerns seem to recur over and over, reducing the complex masses of hormones and neuroses that are teenagers into walking stereotypes. A stark contrast to this state is Tyler Taormina’s feature debut Ham on Rye, which both leans into and defiantly avoids many of the generic pitfalls. – Ryan S. (Virtual Cinemas

As regional festivals over the country adapt to our new times, one of the most well-curated each year is also going digital. The Indie Memphis Film Festival, led by Festival Artistic Director Miriam Bale, is now underway through October 29 and features some of our recent festival favorites (Her Socialist Smile, Freeland, The Inheritance, Shiva Baby), and much more.

Where to Stream: Festival Site

On the Rocks (Sofia Coppola)

A well-modulated vision of the fight against encroaching malaise or mere trifle dressing itself up? Depends on the scene. But trifles have their place and auteurs should be allowed their fun, which On the Rocks deploys over 90 minutes kind enough not to feel like a waste of anyone’s talents or time. An easy point to argue, perhaps, but Sofia Coppola’s greatest gift is making the precise look simple. Its many jaunts through New York City are tethered to Laura (Rashida Jones), a writer whose cushy life with husband Dean (Marlon Wayans) and two children gets shaken by suspicions of infidelity. Laura’s aloof father (Bill Murray, so clearly written into the part of an older socialite named Felix) decides to turn her worries into a game of spying and occasional goose-chasing fueled by rakish boredom and, at one point, intimations of darker connections to Black Cube-like services that track Dean’s movements and credit card. – Nick N. (full review)

Despite David O. Selznick’s desire to keep his cinematic adaptation of Daphne Du Maurier’s novel Rebecca as true to the source novel as possible and not alienate its built-in fan base, at least one change was unavoidable en route to passing Hollywood’s “Hays Code.” Because it concerns a late-arriving revelation that would spoil things, I won’t say what it was. Just know that this seemingly small alteration on paper beneficially reverberates throughout the entirety of what Selznick and director Alfred Hitchcock put onscreen by allowing their characters room to be sympathetically complex where loyalties are concerned in ways that prove impossible otherwise. So while the ghost of the Manderley estate’s former mistress haunts the proceedings in both scenarios via guilty consciences, only one renders its inhabitants as monsters. – Jared M. (full review)

When first approaching Marlon Riggs’ small yet impactful filmography, it is impossible to ignore the breadth of documentary modes utilized to tell his stories and shed light on the experiences of gay Black men, fluidly gliding between multiple approaches to explore various facets of storytelling. With his entire oeuvre now on the Criterion Channel, Riggs’ extensive prowess for wielding the documentary as a force for compassion is available for all to see. – Benjamin G. (full feature)

Writer/director/star Catherine Eaton’s feature directorial debut The Sounding is finally available nationwide digitally after a planned theatrical run was unfortunately scrapped due to the COVID-19 pandemic. It’s been a long time coming considering we reviewed it in 2017 out of the Buffalo International Film Festival, but even longer for its creator considering the one-woman theatrical show that spawned it, “Corsetless,” hit stages in 2007. The film is a timely story about “otherness” and society’s desire to want to assimilate rather than accept. Eaton stars as a woman named Olivia who is introduced as a completely non-verbal (oral or written) person living with her grandfather on a tight-knit island off of Maine before tragedy forces her to speak … but only through the words of William Shakespeare. The result is an emotionally and philosophically touching piece that highlights the complexity of marginalization and seeks to find clarity in the notion that being different does not intrinsically mean being a threat. Read Jared Mobarak’s interview.

Telling Pictures: The Documentaries of Rob Epstein and Jeffrey Friedman

While best known for their Oscar-winning documentary The Times of Harvey Milk, it’s well worth diving deeper into the career of filmmaking duo Rob Epstein and Jeffrey Friedman. Now playing as part of Film at Lincoln Center retrospective in their Virtual Cinema, one can see new restorations of four of their films, each exploring LGBTQ+ history––The AIDS Show, Common Threads: Stories from the Quilt, Paragraph 175, and Where Are We?––as well as Harvey Milk and their look into Hollywood’s history of queer characters, The Celluloid Closet.

Where to Stream: Film at Lincoln Center Virtual Cinema

As of writing this, nothing has really changed in the 285 days since the first COVID-19 infection was recorded. Totally Under Control knows it. Have things happened? Of course, but that’s not the same thing. Alex Gibney, Ophelia Harutyunyan & Suzanne Hillinger’s documentary knows that too. We’ve become angrier, sadder, and more isolated. The rich have gotten richer by further exploiting capitalism, but the poor are still poor. Almost eight million across the country have gotten sick and more than 210,000 have died, but if something that low qualifies as change for this country, then there really is no end in sight. – Matt C. (full review)

Hollywood has few directors who exude the pure, giddy joy one can find in every beat of a Robert Zemeckis film. From the Beatles-infused start of his career in I Wanna Hold Your Hand to sci-fi (Contact) to horror (What Lies Beneath) to a substance-abuse drama (Flight) to a classical throwback (Allied) to the altogether strange (Welcome to Marwen), Zemeckis has mastered the filmic language of momentum and movement to deliver entertainment of the highest order in virtually every decision he makes. Returning to the world of potions after Death Becomes Her, his adaptation of Roald Dahl’s The Witches doesn’t chart bold new territory for the director, but he does brew an entertaining concoction of humor and terror. – Jordan R. (full review)

Similar to the inclusive comedy Blockers–which proved teen girls deserve their own kind of high school sex comedy like the boys have enjoyed for years–Yes, God, Yes continues to evolve the genre while remaining completely grounded in its complexities and contradictions. Obvious Child co-writer Karen Maine’s directorial debut is a witty comedy with nearly no false beats, trading crude comedy for smart insight without forgoing laughs. Natalie Dyer stars as Alice, a 16-year-old girl coming of age in the late 90 before MySpace and other social networking. Thanks to the new found freedom of AOL chatrooms she’s able to connect to a variety of like-minded people from her living room in Iowa, discovering newfound urges when an innocent game of movie scrambles turns into an “A/S/L” instant message. – John F. (full review)