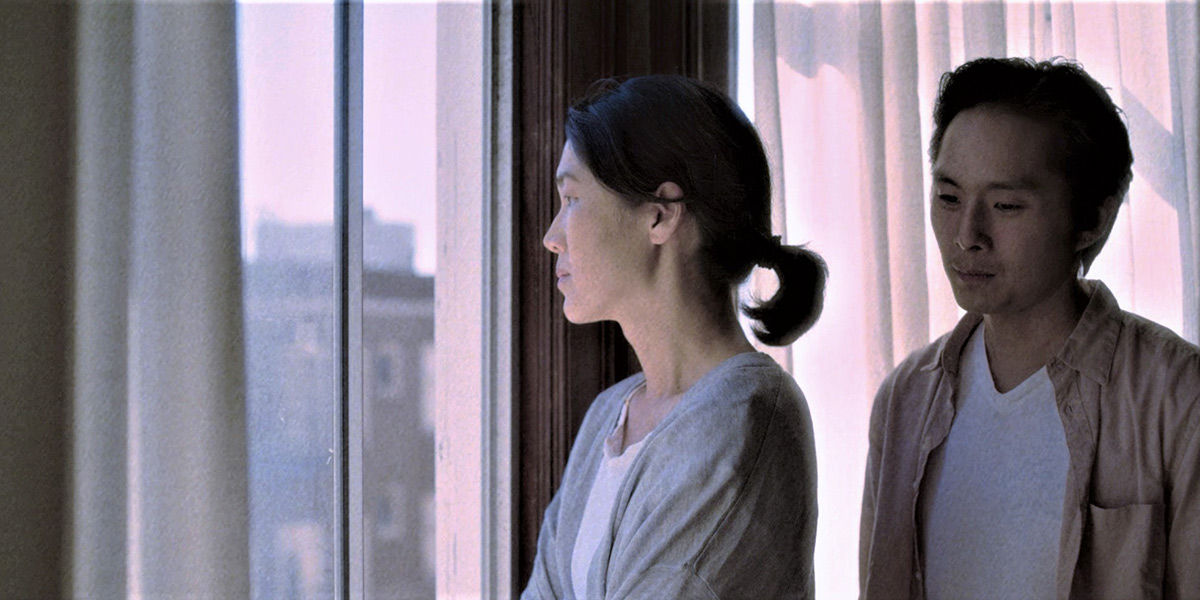 Crazy Rich Asians having opened the spigot on the previously untapped audience for Asian-diasporic considerations of family and multicultural identity, Joy Luck Club director Wayne Wang arrives with Coming Home Again, adapted with Chang-rae Lee from the latter’s New Yorker essay about home cooking and bittersweet nostalgia. A film that will surely be misleadingly marketed as a heartachy children-of-immigrants story, Coming Home Again is authentically a real weird one: Wang, flexing formalist muscles that have atrophied considerably since the early stages of his career, has made his 15:17 to Paris.

Chang-rae (Justin Chon) has taken a step back from his Exeter-Yale-Wall Street trajectory to return to his family’s home in San Francisco, where his mother is dying of cancer in a room off the kitchen. The apartment, designed in hospice neutrals, is almost the film’s only location, and basically a memory palace: over the course of last day of the year, Chang-rae prepares New Year’s Eve dinner for his family, a process interrupted by the rituals of elder care—refilling the IV, mopping up vomit—and the persistence of memory. Seemingly every room in the apartment contains a flashback, and with Chang-rae dressed in the same clothes throughout present and past, chronology is primarily signaled by shifts in his mother’s (Jackie Chung) hair, wig or wrap, and her mobility.

In splintering and reassembling different aspects of Asian-American identity into a mosaic of improv-heavy vignettes, Wang is returning to the format of his breakthrough Chan Is Missing (1982). But the individual scenes, flatly lit and frequently done in shapeless master-shot long takes, are laughably stilted, with desultory line readings from palpably uncomfortable performers. As in the above-mentioned Eastwood film, the content is likewise transparently on-the-nose. Chang-rae and his father spar over the former’s decision to quit his job to write, and the latter’s alleged affair (his defense is that he’s simply working with his younger research assistant on a paper about shifting conceptions of romantic love in South Korea, and yes it’s just as much of a mouthful onscreen); Chang-rae’s oxygen-hogging angry grief alternates with memories of his resentment over his mother’s accent (which comes through in a conversation they have in which he expresses his resentment over his mother’s accent).

In the opening shots of the film, we see Chang-rae prepping beef, making the marinade and scoring the meat; later, he instructs his sister in their mother’s way of frying fish, putting together a formal New Year’s feast for the woman who used to make this food out of love for them and a homeland she left for their sake, but who may not be able to keep down anything solid after two rounds of chemo. Still, the secret to cooking shortribs, repeated insistently at the beginning and end of the film—“flesh connected to the bone”—is the kind of comfort-food metaphor Wang was already knowingly ironic about all the way back in the Chinese restaurant scenes in Chan Is Missing.

The film’s way with terminal illness is clinical, not visceral (the struggle to get onto the toilet or into the bath is alluded to, but not seen), and much of the filmmaking is brazenly amateurish: there is an eating scene with foley work that Antonia Bird would have asked the mixer of Ravenous to tone down, a sudden damp squib of offscreen crowd noise representing New Year’s Eve, and a comically shaky handheld camera during the designated moment of marital discord. As in 15:17 to Paris, the clumsy literal-mindedness of the film makes it seem like a kind of re-enactment therapy—and as in that film, Coming Home Again is all the more affecting for its bald artlessness. The film’s sentimentality is totally naked, almost embarrassing, and very moving.