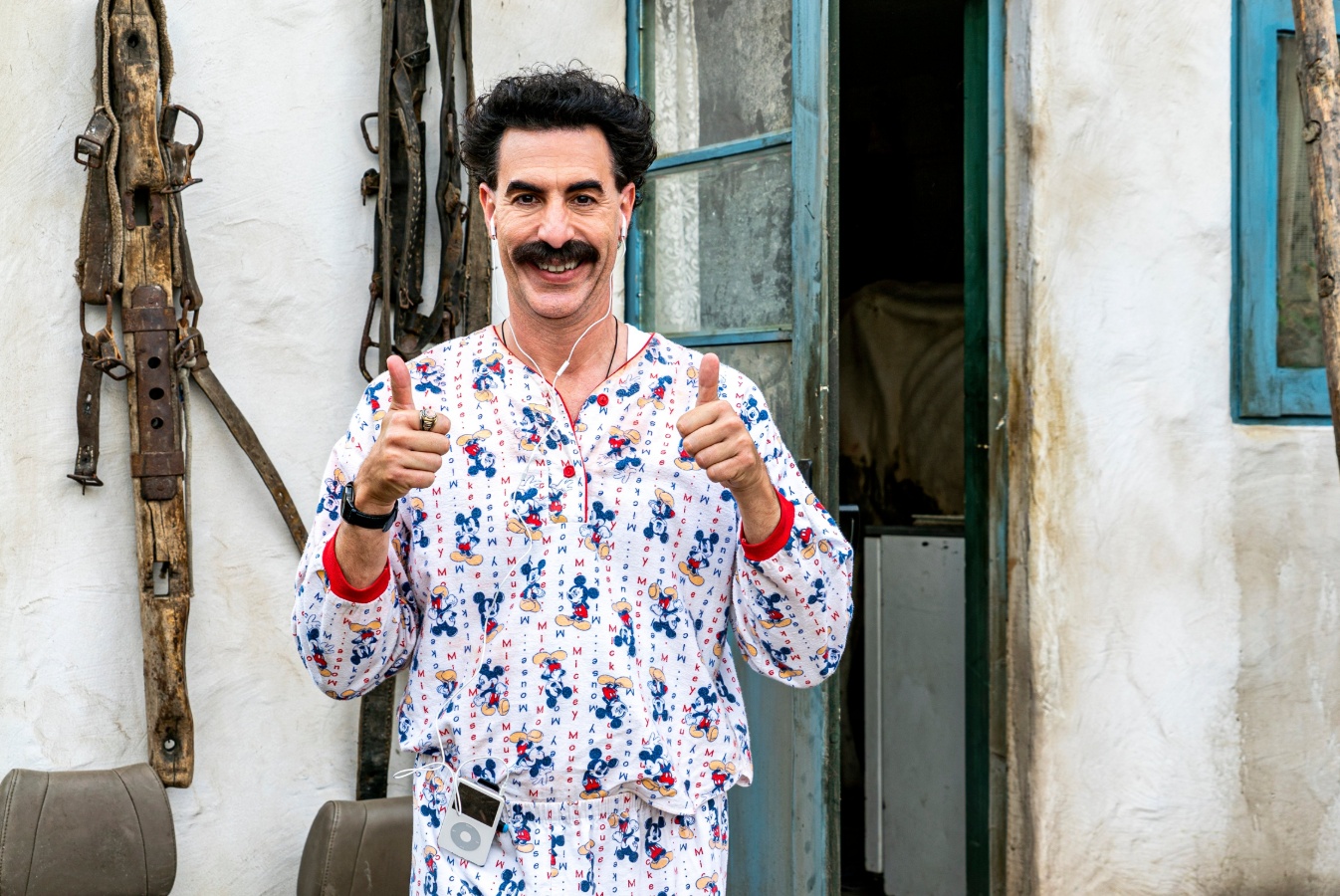 Borat: Cultural Learnings of America for Make Benefit Glorious Nation of Kazakhstan (let’s call it Borat) took the English-speaking comedy world by storm in 2006, wheezing throngs of critics and comedians declaring it nothing short of a revolution: at a rough-cut screening for Hollywood’s comedy intelligentsia, Simpsons writer George Meyer is said to have confided in Judd Apatow that it was like hearing the Beatles for the first time. Borat––Sacha Baron Cohen’s impossibly outrageous orientalist stereotype hailing from a fantastical Kazakhstan where women sleep in cages, antisemitic effigies are ritualistically beaten for sport, and a horse is treated like a man––mingled in unscripted interactions with a diverse cross-section of unsuspecting Americans ranging from politicians to rodeo-goers to aging TV starlets. The result was comic anarchy that nailed the peak reality-TV, early-YouTube, cynical late-Bush cultural zeitgeist. It was part Johnny Knoxville, part Andy Kaufman, all explosive – though arguably not on the same level of concentrated brilliance as Da Ali G Show, where Cohen pioneered Borat and his larger approach to character-driven documentary comedy. Now, two years after Cohen’s unexpected return to TV form in Who is America?, he has now chosen to resuscitate Borat in a more political mold akin to his Showtime limited series. The results are mixed.

Released by Amazon Studios, Borat Subsequent Moviefilm: Delivery of Prodigious Bribe to American Regime for Make Benefit Once Glorious Nation of Kazakhstan (in a running gag, the film’s unwieldy subtitle changes several times along with Borat’s objectives over the course of the story; let’s just call it Borat 2) begins, like its predecessor, in the bizarre backwards neverland that Borat calls Kazakhstan. Fourteen years ago, the breakout success of the previous movie had unintended consequences for our hero when it not only made him a pop-culture icon, but turned Kazakhstan into a laughingstock of the world––leading to Borat’s capture and imprisonment in his home country. In 2020, Borat is summoned from hard labor by a scowling spoof of Nursultan Nazarbayev who has heard about “Premier McDonald” Trump’s affinity for bribery and strongman dictators, and is eager to get on his nice list. To this end, he orders Borat to return to America and quid pro quo his way into the Trump administration’s good graces with the best gifts Kazakhstan has to offer. Before setting sail for Port of Galveston, Borat discovers he has a teenage daughter, Sandra Jessica Parker (played by the mysterious “Irina Nowak,” believed to be Bulgarian actress Maria Bakalova), who’s eager to escape her squalid lot in life by marrying a rich, old American man, just like her idol Melania Trump. (In a weirdly elaborate recurring gag, Sandra watches a Disney-ripoff animated film depicting Melania as a princess “grabbed” by the Donald.) After stowing away on Borat’s passage to America, they decide to deliver her to world-famous “pussy hound” Michael Pence, thus kicking the film’s plot into gear.

That “plot,” unsurprisingly, plays out as a loosely connected succession of scenes and public-prank setpieces à la its predecessor, but is insistently present in a way the original’s narrative structure was not. Borat and Sandra bumble around the American South before Covid hits halfway through the film (likely forcing a mid-production change in plans), and eventually make their way northward along a confusingly defined geography that makes it difficult to precisely call this a “road trip” film.

The real centerpiece, of course, is new star character Sandra Jessica Parker Sagdiyev. More than being just a sidekick like the first film’s Azamat (not present here, but referenced in one eye-popping sight gag), Sandra (and Nowak) shares equal billing with Borat, and a surprising amount of screentime develops their relationship through scripted dialogue moreso than the actors’ spontaneous interactions with ordinary people. Sandra’s written arc unspools mostly as a pat, milquetoast hurrah to Hillary-style liberal feminism, taking dubious aim at the fictional cartoon misogyny of Borat’s fictional third-world hellhole, though it does set up some of the film’s most jaw-dropping unscripted situations––including a climactic sequence involving an extremely public figure from the Trumpverse. Nowak, to her immense credit, somehow matches Cohen for manic, full-body commitment and un-self-conscious public spectacle. But if she has anything resembling his uncanny talent for improvisation, it’s rarely on display. For that matter, neither is Cohen’s.

Borat 2’s new director Jason Woliner doesn’t bring an overly drastic shift in style from the original film’s Larry Charles, but his cuts do seem noticeably faster, footage more heavily edited, and scenes and actors considerably more scripted. The story and script are credited to no less than nine writers, Cohen among them, and more than before the presence of apparent non-actors engaging in clearly staged interactions with the protagonists undermines the illusion of authenticity that gives so much of Cohen’s work its comic punch.

Much of the appeal in Cohen’s most innovative work is the vicarious thrill of unpredictability as we watch him confront his unsuspecting prey with shocking behavior, unsure of how they will respond, only to have the script flipped back on Cohen to respond organically to their responses in turn, and so on, each party coaxing more absurd behavior out of the other with oft-unexpected results. This loony dialectic is one of the most unique and influential aspects of Cohen’s comedy, and here it all too often feels cut short or entirely absent from the conception of scenes which seem to stop at one carefully pre-planned outrageous stunt and one beguiled response, leaving a sense of spontaneous comic discovery out of the process and reducing Cohen’s subjects from equal participants to props.

The propification of participants also dulls the film’s politics. In Who is America?, Cohen coaxed Trump-supporting white southerners (some of them elected officials) to do mind-blowingly outrageous things of their own accord, yet too often here he seems content to simply throw figurative rotten tomatoes in their faces without scoring any particularly juicy reactions, let alone the kind of startling subject complicity that makes his best material work. (His eventual encounter with Mike Pence is a big letdown.) With the film’s more heavily scripted approach to Cohen’s routine––sometimes passed off to Nowak, and sometimes merely utilizing her––the unwitting participants who define Cohen’s act are often passively offered up to the audience’s pre-packaged contempt for a certain class of person, rather than sealing their own fate through their words and actions.

Another complication frustrates the film’s more heavy-handed political intentions: the sheer paradox of wringing comedy from Trump’s America. Predictability and safety are both lethal agents to comedy, and Borat 2 periodically threatens to choke itself on familiar #Resistance material already well-trodden by liberal late-night TV. Did you know that Donald Trump is a pervert? And has bad hair? Remember Stormy Daniels? (There’s shades of Adam McKay’s deeply disappointing Anchorman 2, another sequel to a beloved noughties comedy which traded in its predecessor’s anarchic spirit for a series of over-choreographed partisan punchlines that took all the wrong lessons from the Jon Stewart/Stephen Colbert dyad.) Admittedly, Trump’s mercurial post-ironic absurdity opposite the righteous indignation of his nemeses has proven a tough nut for even the most talented satirists to crack: one can barely exaggerate the man to be more cartoonish or outrageous than his own public persona, and the moment you respond to his grotesque, nihilistic provocations with self-serious outrage, he wins the similarly nihilistic playing field of comedy. How do you parody a President and administration that seems to beat parody to the punch? Too many talented and well-meaning comedians have responded by retreating into unfunny piety, dispensing reassuring homilies for the right-minded and sneering condescension for the rest. (The film closes with an eye-rolling, cutesy, and diegetically nonsensical entreaty for the audience to vote. Thanks for the reminder, dad!)

And maybe that’s the single biggest problem with resurrecting Borat in 2020: his power to coax out dark secrets of the American psyche for the sake of comedy is compromised when they’re no longer secret and no longer funny. Cohen has always maintained that the social value of his comedy lies in exposing hidden ugliness in the American id, but by turning the same approach on the openly id-driven Trumpist right as Bush’s “compassionate conservatives,” he’s no longer participating in any real comic sport. American social conservatives no longer make any serious attempt to hide their ugliest or craziest beliefs, so getting them to say and do ugly or crazy things on camera is no longer a comedic “gotcha!” moment. Cohen and Nowak’s antics do provoke plenty of stark responses, to be sure, but not all of them make for equal comedy. An unexpected Nazi salute from a right-wing protest attendee is a full-force “holy shit” moment, but hearing (supposed) QAnon believers proclaim exactly the outlandish things about demonic vampire pedophile Democrats we already know them to believe has little comic impact—these guys aren’t hiding it!

Hit or miss as it may be, Borat 2 at least doesn’t fall short on sheer audacious vulgarity. Cohen is a man who knows just when to liven up a scene with some prosthetic genitalia, preferably exposed to horrified live subjects, and Nowak eagerly follows his obscene lead. Misplaced animals, unruly body hair, and elaborate sexting gags all populate the film’s comic repertoire, and the more lowbrow the gags the more consistently they hit (one of the best running gags involves an exceedingly patient FedEx employee mediating Borat’s vulgar fax exchanges with “Nazarbayev”). If it isn’t Cohen’s finest work, it’s at least good for a few fresh yuks in a season that desperately needs them.