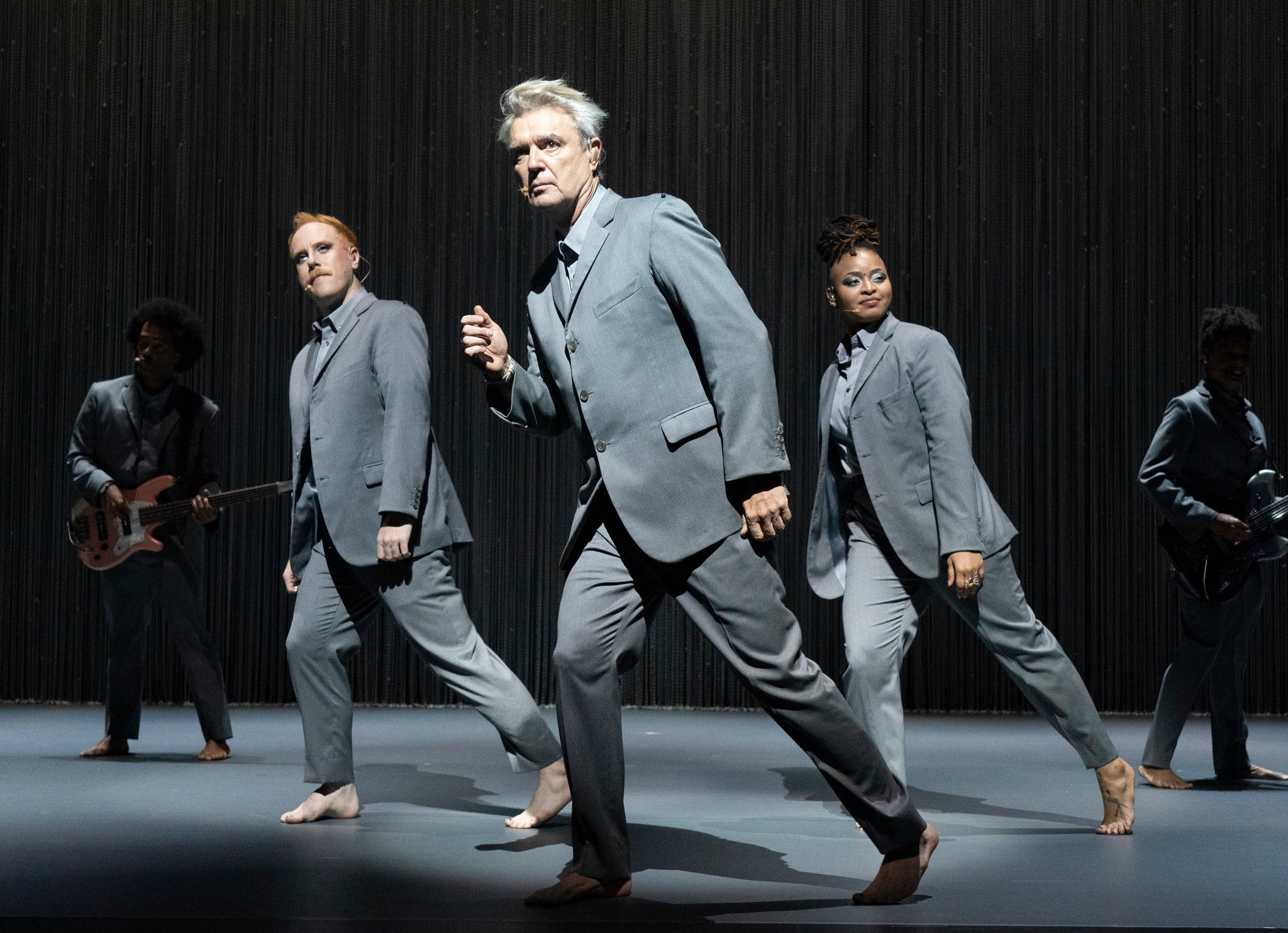 David Byrne is little without his sense of humor. Of course there’s the musical prowess whose longevity persists from then-outré new wave to today’s classic-rock-radio mainstay, that uncanny ability to spin rhymes out of common phrases as if turning air into gold, astonishing physical showmanship, good looks, scholarship, decades of advocacy, even uncommon strength to cross admirably into other mediums, yet all are undergirded by flair, personality, expertly deployed sardonicism that made him a Scottish-American institution unto itself. David Byrne is, at heart, funny, and if he weren’t funny these many attributes might not hold together—less an icon than the imperceptible weirdo of immense gift.

A cocked eyebrow might be the ideal lens for watching his latest project, American Utopia, or at least key into where he’s leading with that title. A sensation nearly the second it hit Broadway last fall, the show offered 20 faithful renditions––from Talking Heads catalog to present-day output—by a coterie of players hailing from around the globe, a fact Byrne will, between songs, use to argue for the importance of immigrants. He’ll also pause to promote voting (also an opportunity to lightly chide this crowd for not participating in local elections). And again to discuss fascism (no names mentioned, all of us thinking the same thing). One number is accentuated with a kneel directly homaging Colin Kaepernick. Because American Utopia cannot simply be musical theater: interplay between song and sermon lets its star offer perspectives with which few in this audience are wont to disagree. These asides are wholly well-intentioned, sometimes well-pointed, and frankly embarrassing. I hate asking him to shut up and sing, but preaching to the small, demographically skewed choir—largely white and middle-aged, so far as you can see into the front row for which tickets had a $300 floor—on this dire American epoch often renders Utopia vividly out-of-touch. It’s an agent of social change much in the way income equality might be achieved via Reaganomics.

These clumsy gestures could, really should be met with a respectful clap were the surrounding production worthy of his once-in-a-lifetime talent, though carted-out masterpieces can radiate a slightly past-due scent. “This Must Be the Place”––at certain points in life my very favorite piece of music––receives the most listless, lifeless take I’ve ever heard; brilliant solo tracks pass unnoticed by myself and, judging from wide angles, audience alike. At other turns do they strike gold. Only well into “Slippery People” did I realize my foot had been wagging the whole time, while “One Fine Day,” a peak in Byrne’s latter-day output, makes good use of the communal vibe for which American Utopia’s been striving. There’s finally that marriage of political slant with performative zeal in their take on Janelle Monáe’s protest anthem “Hell You Talmbout”—finally something to upset complacency and dispel illusions of utopia, a break from live presentation that gives the faces, names, and loved ones of those killed by our racist institutions.

This meeting of politics, performance, thesis, and form is the rare instance I realized American Utopia comes from Spike Lee, an otherwise-major fact rather easy to leave unnoted. As shot by Ellen Kuras and edited by Adam Gough, who nimbly translates movement through cuts—which is harder than it looks, and there’s no identifiable discontinuity between many moving pieces—American Utopia’s visual structure hasn’t given us much to look at: ten-or-so consistent set-ups, the occasional surprise angle (whether or not it should evoke surprise), some optical tricks (only one of which seems specific to this film), quick backstage celebration, and a pleasant, credits-accentuating bike ride.

Great concert films impose a directorial presence onto player and stage alike, but Lee and team seem more content to record. Compare that aforementioned take on “This Must Be the Place” and its dutiful assembly with how Jonathan Demme translated Byrne’s words, voice, and movement into visual music; think of the jolt Scorsese gave us when The Last Waltz stopped dead for Muddy Waters (the result of a camera mishap, but I can only see what I’m given and a sensation is a sensation); or how Prince, directing himself, spun a mini-narrative from “If I Was Your Girlfriend” in Sign o’ the Times. American Utopia lays its cards early and fast, settling into a kind of structuralist game in anticipating the next shot.

There’s still no hurt feelings over this collaboration—Lee’s likely giving us a dozen more movies this decade; Byrne’s legacy was likewise minted long ago—and this disappointment’s far from unprecedented. Have anybody but Scorsese completionists recently watched Shine a Light? Are Demme’s Neil Young docs getting passed around? If one couldn’t possibly hold against two legendary artists the desire to unite, I’m also content to let all involved go their separate ways.

David Byrne’s American Utopia premiered at TIFF, screens at NYFF, and debuts on HBO on October 17.