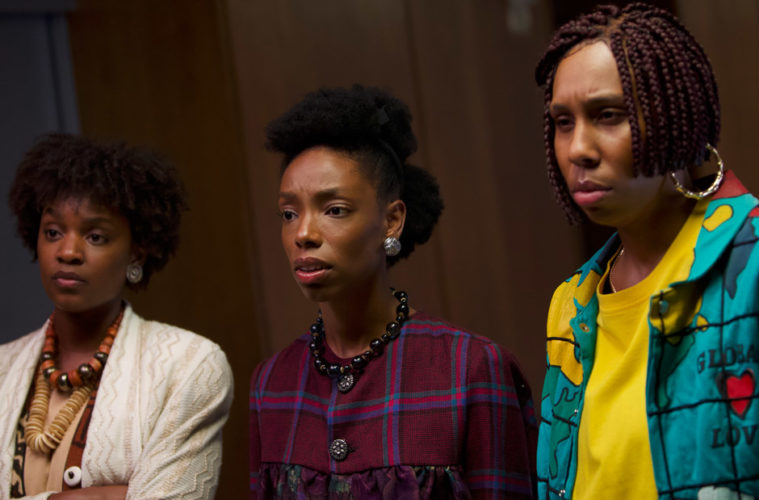 In the six years since first hitting Park City, Justin Simien has had a modest, successful career. His debut feature, Dear White People, swiftly got picked up and hit American theaters in the fall of 2014 to more than quintuple its budget. It was messy, sure, but it had a lot of its mind and energy to spare. In fact, it had so much that it was able to spawn an adaptation in the form of a Netflix series, and as that heads into its fourth and final season, it would appear that Simien is looking ahead while also dipping into the past.

Such brings us to Bad Hair, a horror-comedy that aims to continue his quick dialogue and world-building that blurs the line between the fictional and the all-too-real. Meet Anna (newcomer Elle Lorraine), a young woman making her way in the TV industry. The production design from Scott Kuzio runs in tandem with Kris Bowers’s squishy score while Simien, ever the one for an askew touch, plays with the high angles and Topher Osborn’s tactile cinematography. Here in 1989 Los Angeles, black culture is on the cusp of going mainstream.

The network Anna works for, Culture, is on the up-and-up, but when leadership changes mean no more Edna (Judith Scott) at the top, a sellout named Zora (Vanessa Williams) takes her place. More “accessible” content becomes a priority and, in what partly feels like an excuse for Zora to say, “Culture is dead,” early on, the network is retitled Cult.

Add in the fact that gentrification is jacking up Anna’s rent and there are only so many spots available for people of color in entertainment, and she makes the decision to trade in her natural hair for a weave. Some gnarly inserts of needles and scalps ensue; an evocative motif of brushes digging through hair reaches its apex. The only thing is that this hairdresser (Laverne Cox) didn’t just give her any weave. This thing is sentient, and it acts like the tree from The Evil Dead when it’s in danger.

Bad Hair has all of the starting points for success: a game cast, a campy premise, an idea that has more than a little social commentary behind it. It’s clearly a passion project for Simien too—no filmmaker would put this much world-building into a project that they didn’t have the utmost faith in. And it works for a while. From the music to the pop cultural allusions, the script is a prime example of having a lot of places to go. Unfortunately, this is also a case of a movie only going so far, reaching a point where its parallels become too literal to stick and its plot turns just doesn’t know when to quit.

The aforementioned ambition, though? It’s mostly here. Simien starts by linking black trauma to its economic salience centuries later and, to a less successful extent, ties the personal to the collective. (In the prologue, Anna’s first and only hair job gets botched and leaves her with quite the scar.) The script also continues Simien’s ability to wring solid chemistry from its cast in both dialogue and pace, and while there’s a nagging sense that not much is happening in the way of story or character progression, it’s possible to forgive given the entertainment value.

And then it really gets going, and oddly enough, this is where it really starts to slow down. Anna’s weave starts to come to life with an uneasy mix of practical and visual effects; the mythology deepens. The cultural implications grow; the tones start to fray. Supporting characters such as Anna’s co-workers (Lena Waithe, Yaani King Mondschien) fade into the background while her love interest (Jay Pharoah) shifts from a blank slate into a glorified plot device. Then come not one but three climaxes, making the sense that Simien didn’t know what to focus on too overbearing to ignore.

That isn’t to say that these scenes lack any redeemable value; they are, on their own terms, something. They just mark missed opportunity after missed opportunity, adding up to a nearly two-hour runtime that can feel like a rough cut. Simien begins the film with more focus on this world’s social implications than any sort of concrete mythology, and once he tries to forge one, it feels tacked on. Worse yet, the first half feels so disconnected from what follows that the wicked weave premise manages to feel like an afterthought.

One has to wonder how something like this would play in different hands, maybe ones that didn’t feel so pressured to impress. Bad Hair has some nice directorial details. It also has lots that lack sufficient motivation, and Philip J. Bartell’s editing often borders on the hyperactive. As far as nutty ideas go, this one could have used some conditioning.