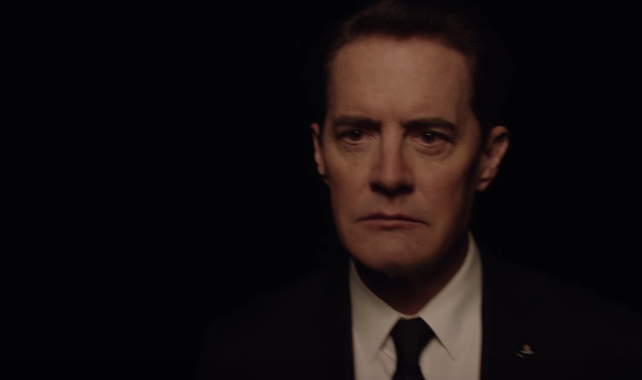 Following this week’s release-date announcement, a new teaser for David Lynch‘s revival of Twin Peaks has arrived. Featuring the first look at Kyle MacLachlan returning as FBI Special Agent Dale Cooper, it’s another enigmatic preview as he emerges from the dark. As long as Showtime don’t reveal much in the way of plot, as promised, we’ll be satisfied with one of these brief teasers for each main character — and nothing else until the premiere.

“Well, in the beginning, many years ago, Mark [Frost] and I were as if lost in the wilderness, as it always is in the beginning,” Lynch said regarding the revival. “Then we seemed to find a mountain and began to climb, and when we rounded the mountain, we entered a deep forest, and going through the forest for a time the trees began to thin, and then coming out of the forest we discovered a small town of Twin Peaks. We got to know the people of Twin Peaks and got to know this mystery. … We discovered this world. And within this world there are other worlds. That’s how it started.”

Check it out below, along with official word from Showtime about the premiere. If you’re looking to catch up on the series before this summer, the Blu-ray box set is also currently under $40. If you need a refresher, we’ve also included Joel Bocko’s four-hour video essay on the series courtesy of Welcome to Twin Peaks.

Journey Through Twin Peaks – Part 1: Harmony of the Dark Woods from Lost In The Movies on Vimeo.

Kyle MacLachlan reprises his role as FBI Special Agent Dale Cooper. TWIN PEAKS, the 18-part limited event series will debut with a two-part premiere on Sunday, May 21 at 9PM ET/PT. Immediately following the premiere, SHOWTIME subscribers will have access to the third and fourth parts, exclusively across the SHOWTIME streaming service, SHOWTIME ANYTIME® and SHOWTIME ON DEMAND®. In its second week, TWIN PEAKS will air the third and fourth parts back-to-back on the linear network, starting at 9 p.m. ET/PT, followed by one-hour parts in subsequent weeks.

Twin Peaks returns on May 21.