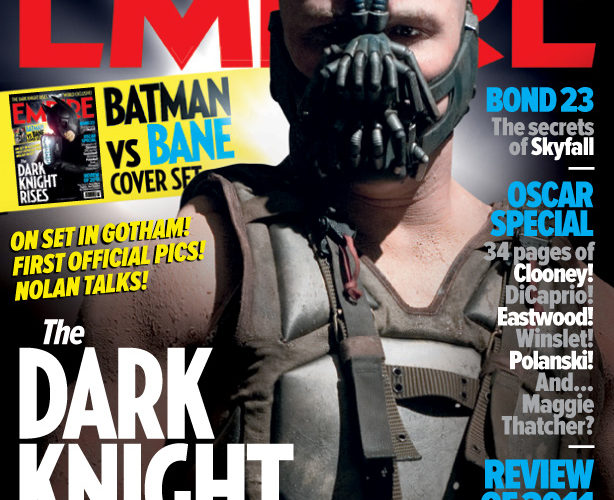 New Reveal of the Brutal, Horrible, Terrorizing Bane In ‘The Dark Knight Rises’ “He’s brutal. He’s a terrorist. A really horrible piece of work.” Those are Tom Hardy‘s new words on his menacing portrayal of this summer’s biggest villain. We’ve gotten near-daily set photos from Christopher Nolan’s massive production of The Dark Knight Rises. But having just concluded, Warner Bros. are now dropping the first pieces of what will surely be the biggest marketing campaign of 2012. We are getting our first full-length trailer with Sherlock Holmes: A Game of Shadows, the same weekend a six-minute prologue is attached to Mission: Impossible – Ghost Protocol. Today we have new looks at our two leads.

Just as they revealed Heath Ledger as The Joker back in 2008, Empire has taken to their covers to deliver two new looks at the great battle of good vs. evil in the summer of 2012. Hardy as Bane is more-or-less how we’ve seen him on set, while Christian Bale as Batman has a mysterious device. Is he getting some UV rays, holding an extravagant laser pointer, or something much more powerful? We’ll go with the latter, which we may see more of in the upcoming trailer. Bale also states his character “has to answer the question: how long do you allow pain to dominate your life?”

Check out both covers below and come back as Empire Magazine will be revealing new information all week as well as more images if some cryptic tweets are to be believed. Anne Hathway as Catwoman, anyone?