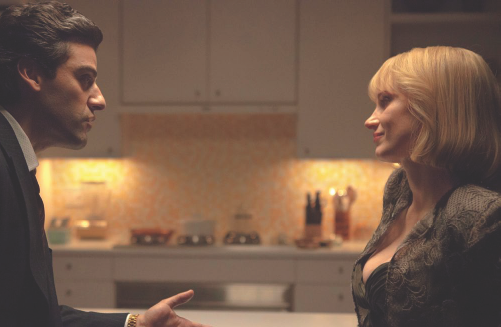 New Images of Jessica Chastain, Oscar Isaac, and Albert Brooks In ‘A Most Violent Year’ Update: Check out high-resolution versions above and below.

While he just dedicated the majority of his year (and likely beyond) to Star Wars: Episode VII, Oscar Isaac still has a batch of promising independent dramas to promote, including The Two Faces of January, Ex Machina (with his Star Wars co-star Domhnall Gleeson), Mojave, and near the top of the list, A Most Violent Year.

Coming from All is Lost and Margin Call director J.C. Chandor, Isaac stars with Jessica Chastain as heads of an oil business that begin to clash with the criminal underworld of New York City. Thanks to a new issue of EW, we’ve now got the first look, picked up by a Tumblr.

Below one can see our lead and the first look at Isaac’s Drive co-star Albert Brooks, as well as a quote that mentions Isaac studied Al Pacino‘s performance in The Godfather Part II before filming. It’s safe to say we’re excited for this one, which will hopefully premiere at fall festivals. “A Most Violent Year” is a thriller set in New York City during the winter of 1981, statistically one of the most violent years in the city’s history. The film follows the lives of an immigrant and his family trying to expand their business and capitalize on opportunities as the rampant violence, decay, and corruption of the day drag them in and threaten to destroy all they have built.

Also starring David Oyelowo, Christopher Abbott, Peter Gerety, Elyes Gabel, and Catalina Sandino Moreno, A Most Violent Year will likely hit theaters by the end of the year via A24 Films.