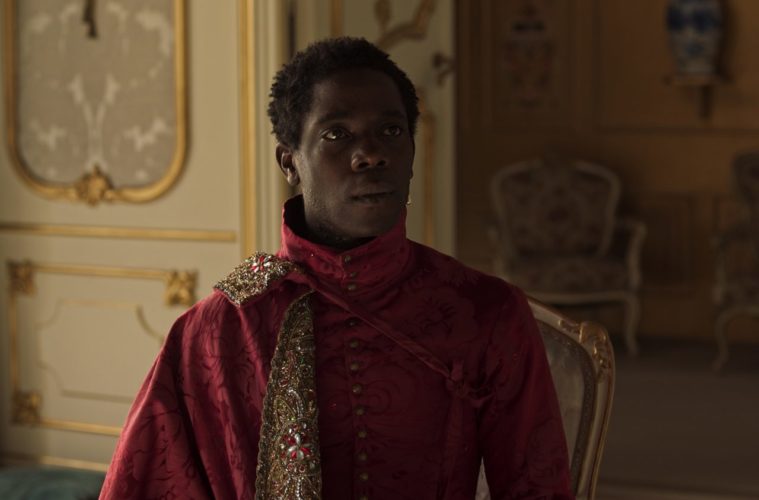 There is no question that white people are and have historically been capable of racism. The value of Angelo resides in its ability to convey those prejudices that are generally ignored or made invisible within the film medium and the art industry as a whole. Director Markus Schleinzer depicts the true story of Angelo Soliman, a kidnapped African child—sold into the 18th century Austrian upper-class as the surrogate son/ pet of a grieving Countess—who futilely becomes a part of upper-class society but not quite an equal member as a “royal moor,” performing for the enjoyment of his court. With a dry sense of humor Schleinzer—who notably worked as Michael Haneke’s casting director—expands on the direct sort of racism generally understood by arthouse audiences by further identifying the unethical ways which art has flourished under that colonial moralist framework which congratulated white aristocrats for their perceived righteous aim of “civilizing” colonized people.

Each frame of the film appears as if it were an object of upper-class spectatorship in a museum. A painterly poise accentuates the ornamental excesses of aristocracy and the academy aspect ratio permanently frames the image at the center of the screen with black borders on all four sides. Schleinzer alternates between two separate camera styles that distinguish Angelo the performer (filmed with stationary shots that mimic the act of watching in a theatrical setting) from Angelo the person (restrained shaky camera movements that emulate a point of view perspective) though he also makes clear the lack of differences. As a performer, Angelo, with wild tales of a homeland hardly remembered, commands the attention of white audience members who in turn laugh and cheer, masking their racism in phony multi-cultural appreciation that derives pleasure from other ethnicities without reciprocal respect. Within Angelo’s daily life, in the face of clear and microaggressive racism alike, the audience is again implicated as direct proponents of a power disbalance.

Angelo is given little dialogue outside of the aforementioned performances and is filmed with a cold, emotionally distant camera that avoids the cliches of loud, violent racism that the slave narrative often resorts to. This kind of obvious recognition of the suffering caused by racism, which assuages white guilt in a “that’s not me so I’m not racist” fashion is exactly the kind of self-flattery via art that Angelo seems to decry. Instead, sympathy is registered through the quiet injustices he is dealt, resonating most prominently through his unspoken alienation from his surroundings. Costume and cinematography work in conjunction to highlight human power structures over the natural and balanced world. Lavishly dressed white bodies are conspicuous in the luscious, overgrown natural exteriors. When they return inside, they disguise themselves into the scenery of their ornamental palaces with clothes that seem perfectly coordinated with decor. Angelo, dressed in an almost parodic fashion like a jester, remains conspicuous in both settings. Later, after he is found to have secretly married a white wife, he is “emancipated”—spit out of the only society he has known. Though he is adopted (purchased) by a countess, dressed up in royal garb, and forced to assimilate through cultural training in etiquette and the arts, he is denied permanent access.

In films such as this, which convey racism historically, it is important to consider the ways things haven’t changed. Angelo’s function in upper-class society as a symbol of white dominion but also of white kindness is most discernible in contemporary colonial discourse surrounding the role of black performers (musicians, actors, athletes, et al.), who despite better salaries and visibility, are still relegated to a similar racial inequality. Things certainly do change with time, but hardly with the speed and effectivity that society claims as progress. The same fundamental trick applies to well-meaning art, which often celebrates its own liberalness, yet limits itself in the form of academic or cultural gatekeeping, which further limits access to knowledge and art to only to those with means and privilege. Despite all of his achievements, Angelo’s body is mummified and exploited one final time as an exhibit in a museum for (white) patrons to gawk at. The polite tranquility of the film erupts to a logical end.