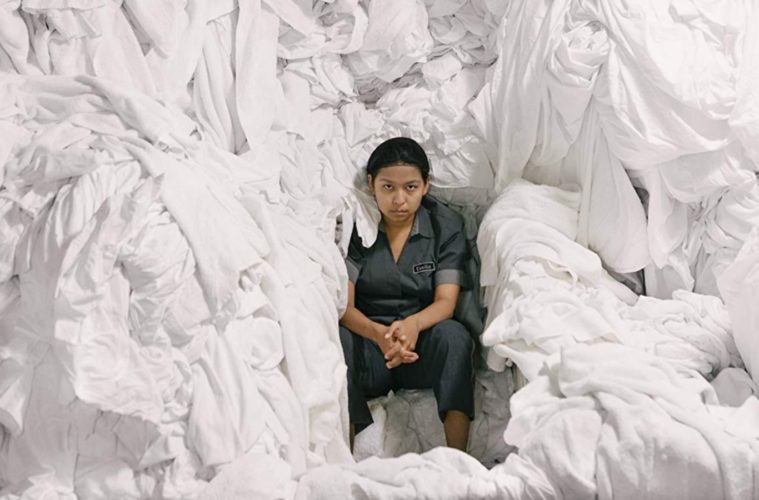 One of the most striking directorial debuts of the year is Lila Avilés’s The Chambermaid which invites a keen look at the class divide in a luxury Mexico City hotel. Brimming with humanity, we follow Evelina (Gabriela Cartol), a chambermaid as she balances her workload, her dreams, and her fantasies dozens of stories above her home life which, in a clever decision, we never see. After a festival tour including TIFF, ND/NF, AFI Fest, San Francisco Film Festival (where it won the top prize), and Morelia Film Festival (where it won Best Mexican Film), Kino Lorber will release it next month and we’re pleased to premiere the U.S. trailer and poster.

In our review from the Toronto International Film Festival (which is also quoted in the trailer), John Fink said, “The Chambermaid offers a sometimes funny and playful look into the inner life of Eve; nuanced and natural, it has a quiet and modest power as it comments on the ironies of contemporary cities like Mexico City and their growing economic divide.”

“The Chambermaid was born a long time ago…it began as a theater piece,” the director says. “The first seed that triggered this project was the book of the visual artist and photographer Sophie Calle, called Hotel. Sophie Calle started working as a chambermaid in a hotel in Venice. She was like a spy and took photos of all objects, trash and clothing that guests were leaving in their rooms, understanding their behavior and personality through their belongings. I liked that feeling of voyeurism, imagining the lives of others from the remains and the absence.”

See our trailer premiere below, along with the poster.

Eve is a young chambermaid working in one of the most luxurious hotels in Mexico City, an exclusive glass tower inhabited by guests so wealthy she can only imagine their lives through intimate fantasies of the belongings they’ve left behind.

Long work shifts prevent Eve from caring for her own child while she helps guests with their own children, but she believes her situation will improve if she gets promoted to work at the executive-level suites. So she accepts a grueling schedule and enrolls in the hotel’s adult education program. A budding friendship with her coworker and an awkward, silent flirtation with an inaccessible window-washer prod her toward much needed bravery. But when things don’t go as planned, Eve transforms her lonely explorations and newfound courage into the necessary strength to face a life outside the glimmering tower.

The Chambermaid opens on June 26 at NYC’s Film Forum and July 5 at the Laemmle Royal in LA, followed by other cities.