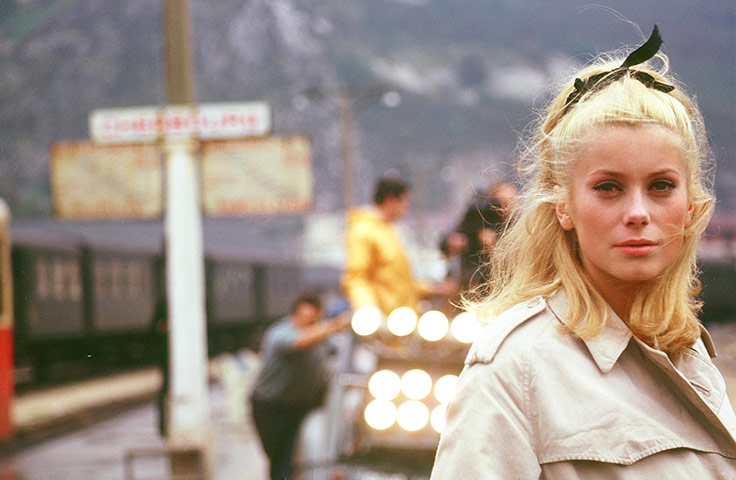 In lauding Miguel Gomes’ three-part, six-and-a-half hour behemoth, it’s perhaps important to consider his background as a critic. Not just in terms of the trilogy’s cinephilic engagement with Rossellini, Alonso, Oliveira, etc.; also in its defiant nature. While it’s easy to assign the trilogy certain humanist and satirical labels from the get-go and just praise these films for following through on them, Gomes continually seeks to mutate and complicate his of age-of-austerity saga. Far from perfect, and so much more exciting for that very reason. – Ethan V.

For his debut feature, writer-director-cinematographer Mark Jenkin takes a parable about a contemporary fishing community under threat from wealthy outsiders and presents it in a style reminiscent of documentaries of the early 20th century, namely Robert J. Flaherty’s 1934 film Man of Aran. The result is titled Bait, a punky, pastoral little movie that draws from the mysticism and iconography of documentaries like Flaherty’s but with a narrative and ironic wit that is inescapably of the here and now. Put it this way: the director may have had those films in mind when he chose to shoot Bait on 16mm and have it processed by hand–for purposes of wear and tear–but perhaps less so when he wrote the scene in which a man on a stag party boards a boat dressed in a large penis costume. – Rory O. (full review)

The nature of promise displayed by a new filmmaker can sometimes be an inherently risky proposition. For every Orson Welles or Jacques Rivette, who burst out of the gate and kept making revelatory film after revelatory film, there are countless others who showed an early mastery before all but disappearing. This, of course, makes institutions like New Directors/New Films all the more important for cataloging these talents, but it can occasionally make one wonder if a real discovery will continue to bear fruit in the films and years to come. However, it is important not to let these concerns color the film at hand, and to continue to keep an eye out for such bolts from the blue. Burak Çevik’s Belonging, which premiered in this year’s Berlinale Forum and will play at ND/NF, is an almost ideal example of this phenomenon. – Ryan S. (full review)

Over the past decade, Robert Greene has carved out a place as one of the most vital American documentarians working today, and with Bisbee ’17, he has produced perhaps his most accomplished work to date. A chronicle of the centennial reenactment of the forced deportation of mining workers that occurred in the eponymous Arizona town, the film emerges as a clear-eyed, blistering look into contemporary political divisions through an entire spectrum of viewpoints, while still possessing some of the most lucid and impressive filmmaking of the year. – Ryan S.

Nicole Kidman is relentless in the fascinating, ambitiously pitch-black, often off-putting police drama Destroyer. Karyn Kusama’s follow-up to the slow-burn horror gem The Invitation is a humorless, grim experience, one bursting with graphic violence and sun-soaked sadness. (It’s like season two of True Detective condensed to two hours.) Yet there are moments of great beauty and real power. And, above all else, there is a badge-wielding, pistol-whipping Kidman, unleashed and on fire. – Christopher S. (full review)

A perturbing reimagination of Goethe’s fable of human hubris, Fausto, Andrea Bussmann’s follow-up to her 2016 Tales of Two Who Dreamt (co-directed with Nicolás Pereda) unfurls as an ethnography of an idyllic stretch of Mexico’s Oaxacan coast and its inhabitants–humans and animals, dead or otherwise. It is a clash of irreconcilable worldviews and epistemologies: echoes of the land’s ancestral myths and otherworldly entities teem with the frustrated quest of total knowledge that animated Goethe’s work as much as the beach-stranded men Bussmann trails behind. They are foreign guests in a world that resists all attempts at subjugation–a universe that constantly seesaws between present and past until the distinction ceases to hold any meaning, and the ethnography ascends to a timeless terrain. Late at night, Bussmann listens to her characters recount anecdotes that draw from a supernatural milieu. There’s the story of the dead who must pay their dues before leaving for the hereafter; magical houses that pop up in the jungle promising travelers endless if ephemeral riches; and psychics who can communicate with animals. Shot in digital but transferred to 16mm, Fausto exists as a site of resistance, a search into dark territories that simultaneously expands and exposes the limits of what can be known–and how knowledge can be passed on to others. – Leo G.

Cooked with a broth of a few too many ideas, A Land Imagined is a so-close-to-being-great Singapore neo-noir that does all the right things, but simply does too many of them in its snappy 95-minute running time. Only his second feature, Singapore-born writer-director Yeo Siew Hua was awarded the Gold Leopard in Locarno for his enigmatic new film. His story tells of a detective who arrives on a land reclamation site to investigate how and why one of the workers disappeared. What Yeo presents is remarkable for its style and ambition but also for its scattered folly, a world of Lynchian dreams and techno-surrealism that somehow echoes both Chinatown and Wong Kar-wai. It’s also a tale buckling at the knees under all that symbolism and with at least one too many loose ends left dangling. – Rory O. (full review)

In Native Son—artist Rashid Johnson’s feature film debut and adaptation of the 1940 Richard Wright novel of the same name—Moonlight’s Ashton Sanders finds himself once again in a similarly complex, utterly electrifying coming-of-age triptych. Fortunately, in this 2019 Sundance highlight, Sanders is given a canvas all his own: one that’s spacious enough for him to fully let loose and create that rare sort of character that feels like a force of nature. – Jake H. (full review)

Not giving into audience expectations and thus creating something more terrifying in its relatability, Sebastián Silva’s TYREL follows a testosterone-heavy weekend and the anxiety-inducing isolation one character is faced with. Jason Mitchell plays Tyler, the only black man invited to a Catskills cabin for a birthday weekend, the kind of place where an overlarge, inflatable Santa resides in the front lawn. As more alcohol is consumed and clumsy jokes are thrown around, Tyler’s feeling of ostracization balloons and, with a perceptive eye, Silva captures every miniscule jab, all deeply felt by our protagonist with almost no remorse from his cabin mates. – Jordan R. (full review)