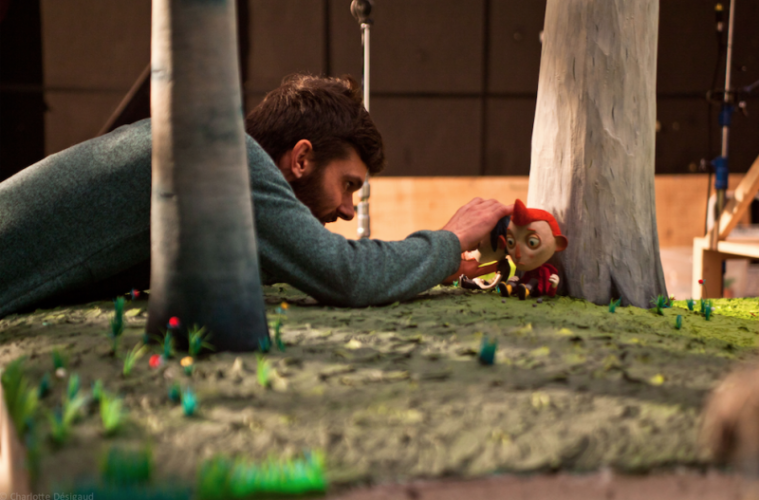 ‘My Life as a Zucchini’ Director Claude Barras on Tackling Taboos, Facing a Crisis, and His Favorite Animations

Premiering in the Directors’ Fortnight section at the Cannes Film Festival last year, Claude Barras‘ feature-length debut animation My Life as a Zucchini (aka My Life as a Courgette) is a deeply felt tale of the healing process through the eyes of an orphan. Ahead of its U.S. release this weekend, where it will also compete as a Best Animated Feature Film nominee at the Academy Awards, I had the opportunity to speak with Barras about crafting the animation.

We discussed his collaboration with Céline Sciamma (Girlhood) on the script, taking the perspective of a child, capturing taboo subjects, a crisis in production, his biggest animation influences, his Oscar nomination, and where he sees the future of his craft heading. Check out the full conversation below.

The Film Stage: Can you talk about the child perspective of this film — you don’t see the mother’s death and adult conversations are usually heard from a distance — and how it helps the drama?

Claude Barras: For me it was really important, because it’s what attracted me in the novel. It’s the fact that the story was seen through the eyes of Zucchini. With the writer, Céline Sciamma, we thought a lot about this and how not to talk like kids, but put ourselves in the shoes of kids and basically become a kid again. When we recorded the voices, because we had all the kids play together, new stuff came up, so we adapted a few new things to the story, to the script, in the way they were talking.

At least in America, some say this film deals with taboo subjects — at least in animation — like death, sex, and abuse, but personally, I think they are very universal themes that anyone could get something out of. Do you think we have a ways to go before this becomes more accepted in animation?

One of the lines you have in the film, describing sex, the kids say “exploding willies.” I certainly hadn’t heard that description before. When you first read the script, what was your impression?

In the script, there was definitely more references to sexuality. After we rehearsed with the kids, we used most of the stuff that the kids came up with and the way that the kids talked about it. We kept in the movie what would be less disturbing to the parents. There was a line when a kid during the recording actually said, “You put the willie into a girl and after that you will explode.” So we only kept the last part. For the people who are doing the censorship in movies, just that line is a line that describes penetration, so because of that, it would not be allowed. So we took it out. It was good to explore all these different things and then to keep the few things that were really funny.

There was a crisis in this film where you ran out of money with only 55 minutes. Can you talk about that process and if that break helped the rest of the film at all?

It was really interesting. It was a good break because what we already had shot was really, really good. The producers and nobody else wanted to sacrifice the movie. So with that we were able to go and ask for more money to continue the production. We already had the movie we wanted to make so we showed a few scenes that we made a little bit longer by having the character listen to what’s happening around him. So that helped us gain some time. It was quite radical and also a different way of directing the movie and I’m quite happy with the results.

It’s quite amazing to see a movie under 70 minutes to pack so much philosophy about life and death in such a short time. Is that length something you were going for from the beginning?

The script had three more scenes that would have made the movie 15 minutes longer. I don’t regret it because the fact that I had these constraints made me come up with something that, in the end, was more pure and concentrated. As a result, there is something that is very minimalist about the movie that I like.

I had the opportunity to see both the original French version and the English-language debut, which are different experiences. Did you have a hand in the translation process of how the script was read?

I’m very happy with the English translation, but I’m not involved at all with the recording and dubbing of the voices in English. I did a lot of work, about 30 hours, when we recorded the kids in the French version. The dubbing of movies is not something I know very well. I had to trust the people whose job it is, because it’s not just the voices, but you also have to time it right with the animation.

Congrats on your Oscar nomination. Can you talk about your reaction and why people are responding so well to it all over the world?

Because our movie was also up for Best Foreign Language Film we spent about five weeks in Los Angeles promoting the movie and have people coming to screenings and discovering the movie. We went to the studios, Sony and DreamWorks, where we had these screenings. It was beautiful meetings with these people and also see the way that they work here in the United States with way bigger budgets. For them, on the other side, to see how with a very small budget, you are still able to do something interesting. We were really, really proud to be here in the middle of those big, big movies. They streamed the announcement of the Oscar nominations and we screamed and we laughed and we drank a lot of champagne when we heard the movie was nominated.

Either when you were growing up or recently, what have been animated films that have influenced you?

I loved the series Heidi. It’s really close to my film in a certain way, because it’s a drama about a little girl who is also an orphan. The grandfather also has a little bit of the same face as the policeman who takes him in at the beginning. Princess Mononoke I liked very much as well. There’s another one that I don’t know the English title of. It’s about two orphans during the war in Japan.

Oh, Grave of the Fireflies?

Yes, exactly. Often the movies that I like are made by Japanese people, even Heidi for example is happening Switzerland, which I found very strange. And I’m Swiss. I also like movies from Jan Švankmajer, Brothers Quay, Tim Burton, Aardman, and Fantastic Mr. Fox, too.

Lastly, when I saw your film it felt like it was exploring untapped potential in the field of animation. What do you see as the future of animation in terms of storytelling and technology?

This is a huge question, but I’ll use the example of The Jungle Book, which you have a lot of animation but one real-life actor. We are completely the opposite. We are doing a story that is very realistic, but with puppets in a very simple way. In the middle there is an infinite way of telling stories and the form of it. The rest also has to do with the market. Is the market ready to accept a different kind of storytelling and animation that is not just for kids? For the time being, it’s mostly Japan who is exploring, so hopefully it’ll be the beginning of something that will open it for the rest of us.

My Life as a Zucchini opens in limited theaters on Friday, February 24.