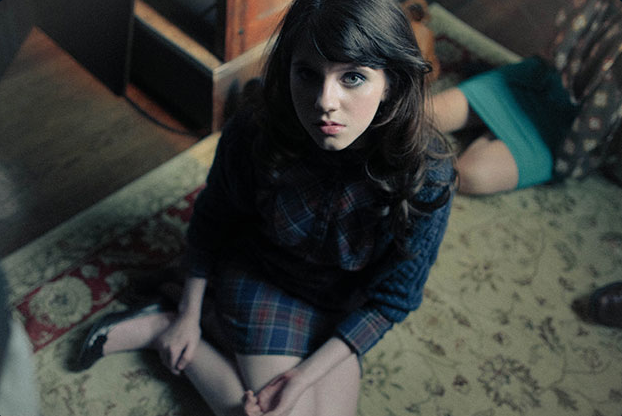 “It’s not very often that an actor other than a Wilson brother, Jason Schwartzman or Bill Murray gets to take the reigns in a Wes Anderson film,” we said a few years ago. “With Moonrise Kingdom, not only did Anderson incorporate a new 1960s period, but he also found two young actors that fit seamlessly into his angsty, yellow-tinted world. While watching both Jared Gilman and Kara Hayward play the troubled duo of Sam Shakusky and Suzy Bishop, I often forgot just how young they actually were, thanks to the way they effortlessly handled Anderson’s mature dialogue; not to mention their ability to carry the entire film without any help from veterans like Bruce Willis and Murray.”

We’ve been looking forward to what the break-out actors will take on next and today we have our first look at Hayward’s next project, The Sisterhood of Night. A modern day twist on the Salem Witch Hunt Trials, the teen drama follows a secret society in a New Jersey town. Based on Steven Millhauser’s short story, Caryn Waechter also directs Georgie Henley, Willa Cuthrell, Kal Penn, and Olivia DeJonge in the drama. Check out the trailer and poster below ahead of a release next month.

THE SISTERHOOD OF NIGHT begins when Emily Parris exposes a secret society of teenage girls who have slipped out of the world of social media and into another world they’ve discovered in the woods at night. Accusing them of committing sexually deviant activities, Emily’s allegations throw the small American town of Kingston, New York, into an atmosphere of hysteria and the national media spotlight. The mystery deepens when each of the accused upholds a vow of silence.

Three of the girls are pegged as the ringleaders: Mary Warren, the alleged founder of The Sisterhood who has an enigmatic charisma that can be dangerous; Catherine Huang, who expresses herself through fashion and wrestles with the fear of losing her mom to cancer; and Lavinia Hall, a child prodigy pianist who worries she’ll never be kissed despite her alluring beauty. Pressure mounts as the investigation turns ugly and more victims come forward, but the accused hold fast to their vow of silence. Emily’s blog takes an unexpected dramatic turn when suddenly a whole other circle of girls across the country emerges with personal stories of sexual molestation. Emily Parris also has secrets, the ones she doesn’t choose to reveal on her blog, which has suddenly rocketed to national acclaim, dubbing her a “Teenage Healer in the Digital Age.”

Why do the Sisterhood girls love the solitude of the night? Why are they willing to risk so much for a nighttime gathering in the woods? Based on the short story by Pulitzer Prize-winning author Steven Millhauser, THE SISTERHOOD OF NIGHT chronicles a group of girls’ provocative alternative to the loneliness of adolescence, along the way revealing the tragedy and humor of teenage years changed forever by the Internet age.

The Sisterhood of Night opens on April 10th.