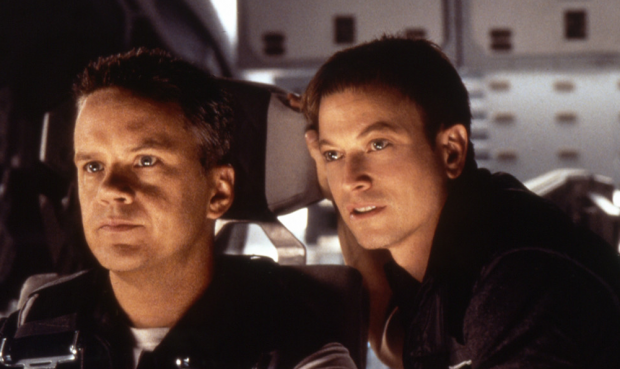 “It can be said with certainty that any reviewer who pans [Mission to Mars] does not understand movies, let alone like them,” declared Armond White in 2000. While perhaps an over-corrective to the critical drubbing the film had just received, there’s nonetheless a grain of truth in his statement. Far from being a pale imitation of 2001: A Space Odyssey, as many reviewers accused, Mission to Mars actively deflates its predecessor’s misanthropy and grandeur – on one level, it’s a lavish, epic-scale lark from a director who’s often been as much a satirist as a craftsman.

With a budget of $100 million, it was and still is the most expensive project Brian De Palma has tackled. It’s also the only straight-up piece of science fiction among his filmography, as well as a relatively wholesome, PG-rated affair – a rarity for this most salacious of mainstream American filmmakers. Originally to be directed by Gore Verbinski (fresh off his debut, Mousehunt), it remains one of the true outliers in De Palma’s oeuvre; you’d have to go back to 1986’s Wise Guys to single out a film that delivered less of what one had come to expect from the director.

On paper, it seems a blatant ill fit for his sensibility, but circumvention and misdirection have always been elements of that sensibility. It opens with one of his trademark bait-and-switches, in which an illusion is quickly revealed for what it is: a blue sky, with an off-screen voice counting down to lift-off, then a rocket shooting straight up, only moments later revealed to be a sky-rocket launched in celebration of the upcoming mission. This is immediately followed by another of his trademarks: without a cut, we switch to a roving steadicam tracking shot that drifts and whips through a backyard barbecue, introducing the film’s main players in a single, fluid take and establishing the film’s ultimately jovial, communal atmosphere.

Following this frisson, however, is a graceless dump of exposition in which we learn that Luke (Don Cheadle) is preparing to lead the Mars 1 spacecraft’s expedition to the planet, which was the lifelong dream of his best friend, Jim (Gary Sinise), who was denied the opportunity due to emotional instability following his wife’s passing. Redeeming this rough patch of amateurish screenwriting is an elegant cut: from Jim’s footprint, left deliberately and ruefully by him in the backyard sandbox, to the surface of Mars. This ellipsis brings us forward to the incident that jeopardizes Luke and his crew, in which a phallic, vortex-like creature emerges from a sandstorm and kills a few crew members while leaving others stranded on the planet. Jim is then recruited for an emergency rescue mission as co-commander, led by Commander Woody Blake (Tim Robbins), along with mission specialists, Terry (Connie Nielsen) and Phil (Jerry O’Connell).

As a space-adventure film, Mission to Mars is an unpretentious, enjoyably hokey affair that stays true to tone of 1950s sci-fi landmarks such as Forbidden Planet and The Thing From Another World; Mario Bava’s Planet of the Vampires also seems to be a key inspiration. Rather than wasting the talents of Robbins, Cheadle, Nielsen et al., only skilled actors can maintain the slightly stilted, artificial acting style that this material requires, rife with lines including, “He’s right – it’s no use” and, “Let me understand this right…” Ennio Morricone’s score isn’t one of his most inspired, but the familiarity of its cues – loud stingers for the sudden appearance of a long-believed-dead character, a sighing major-key orchestral swell the second that peril is resolved – blends well with the iconography that De Palma embraces throughout. Most importantly, its Mars sequences are just plain beautiful and eerie. On the level of mood and visual majesty alone, it leaves Ridley Scott’s prosaic The Martian for dead.

Indeed, the initial critical reception (Cahiers nonwithstanding) seems perplexingly harsh for a film whose greatest offense is steadfast corniness; to these eyes, only in Jerry O’Connell’s exasperating “comic relief” is where it crosses a line. Meanwhile, the references to 2001 ingeniously and cheekily reinforce the film it isn’t – the centrifuge-as-hamster-wheel sequence is riffed on for a joyous diegetic dance set to Van Halen’s “Dance the Night Away,” while Kubrick’s monolith is evoked in the final act as a horizontal rectangle of black against a white backdrop, conversely revealed to be a welcoming entrance into a space where peaceful alien contact is made.

The latter sequence is where the film reaches its apex of endearingly cornball mysticism, and it’s best to look beyond the even-then-antiquated CGI aliens to the implicit sight of De Palma finally letting his guard down. He’s never been evidently interested in the cosmic – he’s most in his wheelhouse when delineating space and time, hence his obsession with the possibilities of split-screens and split-diopters (the latter, but not the former, makes an appearance here). Accordingly, Mission to Mars works best, in a conventional sense, during an earlier set piece in which the rescue mission becomes endangered by oxygen leaks in the spacecraft, triggering a race against time to identify and fix them. Its depiction of extra-terrestrial contact is less convincing, yet there’s something poignant about De Palma surrendering to the material’s demand for uncomplicated, awestruck wonder.

If the tendency in critical writing about De Palma has been to use his early, Godard-ian work (chiefly Hi, Mom!) as the key to accessing the latent reflexivity of later, more straightforward genre exercises, Mission to Mars might be the closest he’s come to changing the locks. When viewed alongside the late works of the director’s fellow Movie Brats, the closest relative might be Scorsese’s similarly, uncharacteristically benign Hugo, but De Palma takes a resolutely non-reflexive path in his attempt to evoke the wonder felt by a child watching Le Voyage dans la Lune in 1902. If Mission to Mars ultimately elicits snickers more than awed gasps in the final stretch, it’s nevertheless immensely touching for the defiant sincerity of these scenes – it is also, needless to say, altogether vastly superior to 2000’s other Mars movie, Red Planet.