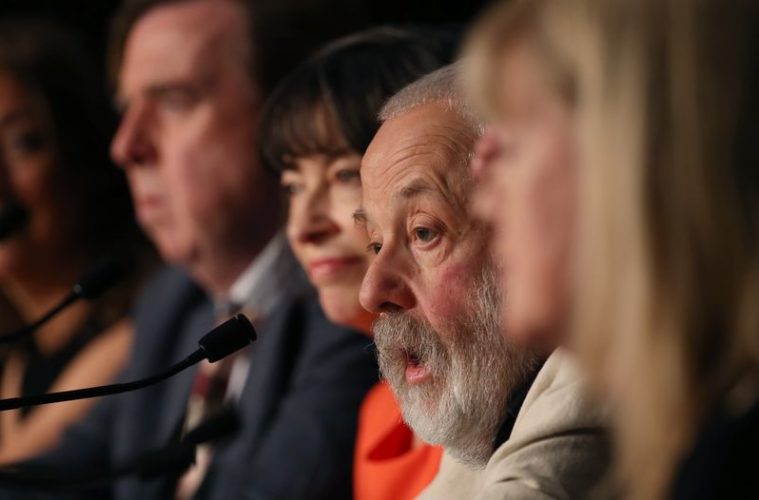 After opening with Grace of Monaco, Cannes recently kicked off screenings of their competition slate and one of the most acclaimed early contenders comes from English filmmaker Mike Leigh with his beautifully shot biopic Mr. Turner (our review here). Based on the historical figure, the beloved British landscape Romantic painter J.M.W. Turner, one may know or admire his works, but exploring his personal life is something altogether different.

Leigh takes us on a journey with cinematographer Dick Pope to help to examine his life through his own landscape palette colors. He also welcomes a top-notch British cast, toplined by Timothy Spall, who embodies the titular figure, as well as actress Dorothy Atkinson (as housekeeper Hannah Danby), and Marion Bailey (playing his significant other Sophia Booth). During a Cannes press conference, Leigh and his cast opened about Turner as a historical character and discussed the film’s production. One can read the highlights below, as well as watch the full press conference at the bottom. The first question that emerged was why Leigh embarked on a film about a person full of contradictions. Looking at Mr. Turner’s personality, not much has been explored much in the medium, despite Aleksandr Sukrov‘s 2003 film Father and Son, which is visually based on Turner’s work. When asked if that was an influence, Leigh say, “In fact, I’ve forgotten about it until we made the film.”

Leigh went on to explain, “Turner is obviously is a great artist, one of the great painters anytime anywhere, a great radical revolutionary painter. There was scope for what could be a fascinating film. Because of the tension between this very mortal and someways flawed and very inspired individual. And this epic work of this spiritual way that he had of distilling, capturing and expressing the world.”

“He was a man of the mystery,” says Timothy Spall, exploring Turner’s character. “There are quite a few biographies, and I read quite a few. It became obvious, well to me, what makes this film so wonderful. It’s about how genius is not always in the most romantic of packages — how most geniuses are strange, they do have conflict, they do have these conflicts in themselves, they are often odd-looking sociopaths.” He adds, “He was working class, but had this amazing poetic soul.” Mr. Turner is portrayed as an odd, brutal character, but at the same time poetic and with a hidden heart. Spall continues, “So, this contradiction between this slightly brutish, but a man with love in his heart, but not quite sure where to put it, and this amazing visual genius he was, it quite an interesting thing to investigate.”

Getting painting lessons for two years prior to filming, Spall goes on to say, “On the practical level I prepared and, then obviously I researched a lot. And I knew a little about Turner. The great thing is that, what what made us a perfect match, apart from anything, is that he was a funny-looking fat little man and so am I. But as his soul concerns, that took a lot of research and his art and what his aspirations where. And that is part of the process of Mike and the other cast.”

All the research in the world doesn’t make a great film.

When making a film surrounding a historical figure, one will never get rid of the high expectation surrounding the accuracy of the film. However, Leigh points out there is so plenty of room to be creative and, after all, it represents the author’s point of view. As the director explains, “We were dramatizing historical characters and the job was to bring to life that world in a poetic and free, and not in a documentary way, but still in a way with the responsibility to create a reality that was properly grounded in the research.” He adds, “You can read all the books in the world, you can research for a million years, but it doesn’t make things happen in front of the camera. You still have to create a characterization. You still have to breath flesh and blood into it. So what we did is exactly what we always do, which is to create these characters to work and to develop the whole world of the film. But added to that was all the research that informed our decisions. But in the end you still have to make it happen.”

On the major person in Turner’s life that didn’t make the film.

While there’s a host of characters that populate the film aside from Turner, Spall opened up about one that didn’t make the cut.  He says, “There’s a massive lead role in this film that isn’t in and that’s Turner’s mother. And Turner’s mother, unfortunately the word then was, a lunatic, and all of its horrible consequences. She made him and his father’s life misery and we chose to exploit that in rehearsing.” He adds, “that left a scar in Turner’s heart, and that made him quite dysfunctional with women.” Spall continues that it’s this missing gap in his life that was likely the catalyst for his great achievements.

Watching Mr. Turner, one can’t get shake the similarity between the real Turner’s work and film’s cinematography. Spall says, “Turner was what we call, very much in the center, a painter of the sublime — not the way we use it now. The sublime means the tension between man’s involvement in the beauty and the horror of nature.” He adds,” It grew out of the Romantic painter…they were the first painters who painted what they felt about what they saw, not what they saw. The sublime is about horror and beauty, and man’s futility within it. And that is what Turner was trying to recall, from his very guts.”

Cinematographer Dick Pope talked about the challenge and choices to recreate Turner’s beauty and horror in the nature and Turner’s life in the shots. He says, “The choices started off with me researching the palette that Turner used in his paintings and it’s on public display actually at Tate Britain. Including his colors, the way he used it and they are all documented in there. So I started researching the colors that he actually used for a paintings and then we devised a palette ourselves based on that. That was the only real rigorous choices that I made, was try to tell the story with the pictures with the colors that he used that time.”

Spall on Turner’s art of the grunt.

The actor opened up about one of the recurring tendencies of his character, saying, “I think the grunting grew in this organically, out of this incredibly instinctive and emotionally autodidactic intellectual man who had a billion, zillion things to say, but he never said it, so he encapsulated it in an imploded grunt. That’s how he expresses himself a lot of the time because he has this burning thing inside of him. So rather than say it, it’s just [*Spall grunts*]. Because you know those people who sneeze and redecorate the room and have a wonderful time? But people who do [*Spall holds back a sneeze*] they are oppressing something, and I think that’s what it is. That’s the art of the grunt,” Spall laughs.

Leigh on being a British icon and why he can’t use the Secrets and Lies Royal Mail stamp.

One of Leigh’s most acclaimed films, the Palme d’Or winner Secret & Lies, is planning to be printed on the Royal stamp in the UK, a definitive recognition in the country that shows the lasting value of his work. In response, the director laughs, “It’s great that Secrets & Lies is on a stamp. It’s unfortunately on a stamp that’s more expensive than the one I normally use when I sent a letter.” He added that Royal Mail asked him for a quotation and he said, “I hope that nobody that every uses this stamp should forget about the thousands of babies that are given away for adoption every year. In the end film is about something and something important and I thought that maybe people should be reminded of that.” When asked about being a British icon, he said, “I hope as a profoundly iconoclastic person, I will resist the temptation to be an icon that you are suggesting.” In the end, Leigh and Spall agree that they are simply eccentric. Mr. Turner premiered in Cannes and will be released on December 19th by Sony Pictures Classics. Read our review here.