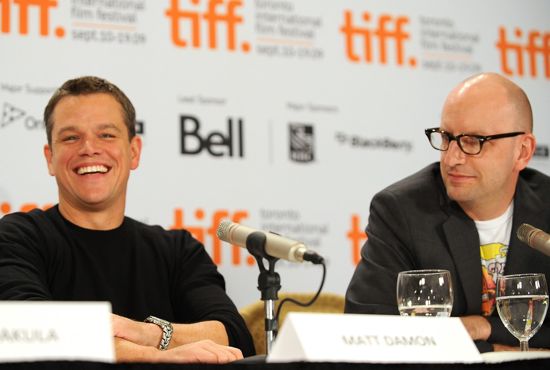 Sad news from 24 Frames – According to frequent Steven Soderbergh collaborator Matt Damon, the man behind films as varied as Solaris, Sex, Lies and Videotape and Ocean’s Eleven is ready to retire from filmmaking.

“He’s retiring, he’s been talking about it for years and it’s getting closer,” Damon said, currently shooting the thriller Contagion in Chicago with Soderbergh. Damon goes on:

Geoff Boucher, who authored the 24 Frames article, wonders if it’s a hoax or a prank, but Damon insists that it’s true. Matt Damon has appeared in five films directed by Soderbergh: the Ocean’s trilogy, The Informant! and now Contagion, and obviously knows the director very well. Damon goes on to offer some details:

“After this movie we’re doing ‘Liberace’ next summer with Michael Douglas, and then he might do one more movie after that with George [Clooney], and then after that he’s retiring.”

“After I worked with Clint [Eastwood] I went back and said, ‘Look, Clint is having a blast and he’s going to be 80 years old.’ And Steven says back, ‘Yeah, but he’s a storyteller and I’m not,’” Damon recounted. “If you’re an actor or a writer or someone working in film, it’s such a waste. For me, I’m going to spend the next 40 years trying to become a great director and I will never reach what he’s reached. And he’s walking away from it.”

If Soderbergh really hangs it up, it will be a sad loss of one of the most versatile, gifted, (self-)obsessive and fearless filmmakers in America. Soderbergh has proven adept at mainstream commercial films, receiving two Best Director  Academy Award nominations in 2000 (for Traffic and Erin Brockovich the only director with that distinction to date), and has followed his commercial hits with personal experiments like Bubble and The Good German.

While Soderbergh’s exhaustion is understandable, let’s hope he changes his mind. His is a clear, unique voice in our cluttered world of claptrap, recycled nonsense and pandering reality TV. We need him now, more than ever.