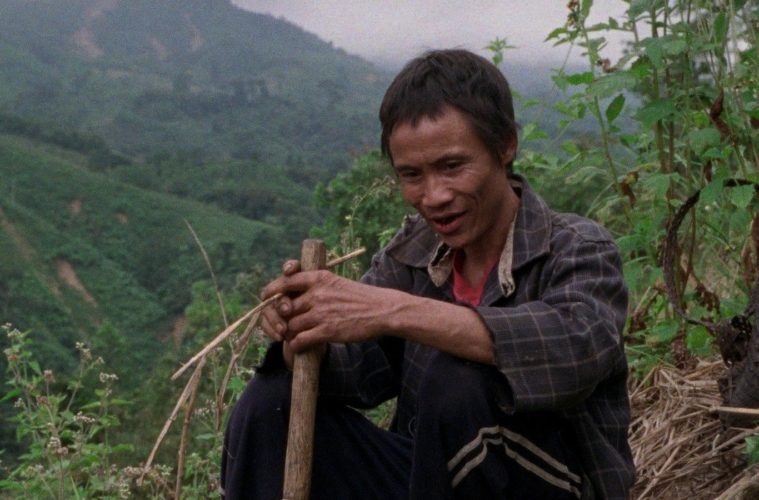 The unnamed, invisible filmmaker wending you through Truong Minh Quý’s The Tree House talks from Mars, but all he shows of the red planet is a black screen, and the sounds he’s recorded therein: some distant, grave rumbling, like the aftermath of an explosion, the echo of protracted thunder. Minh Quý’s Locarno entry–hailing from the Cineasti del Presente sidebar–is a tale set in the year 2045, in a planet 54.6 million kilometers away, but it may as well take place in the present, and the narrator could just as well speak from a remote mountaintop, or a city skyscraper. The sci-fi premise is hardly what counts here–or at any rate, it should not be taken ad litteram. This is not a film about some cinephile-cum-astronaut and the planet he is stranded in, but about the relationship between the man and the place he’s left behind–a place that should ostensibly feel homely, and can hardly be recalled. But just what happens to one’s identity when memories evaporate, and the past starts to crumble?

It is upon this question that The Tree House essentially pivots. The logline notwithstanding, the setting of this mesmerizing documentary is not some dark, mysterious planet, but the tropical rainforest of Vietnam’s Central Highlands. It’s a lush immensity of tall trees and wooden houses perched atop them, a land that was once home to Truong Minh Quý’s family, and billows back to life in a tapestry of old footage which the unnamed filmmaker-narrator brought to Mars, and now rewatches, in an attempt to reminisce his life on earth. Inessential as it may first strike, this is where the extraterrestrial, far-in-the-future premise acquires a deeper meaning. For the Martian, black screen preamble dons the lush images that follow the melancholic vibe of some relic of a long-gone past. It’s an invitation to watch what looks like a postcard of an irretrievable epoch, but the postcard–much like the memories of the time and space it captures–is fading. Shot by Son Doan in super 16mm, the footage’s dust, scratches and light leaks amplify the feeling that what you’re watching is the only existing print of some ancient, evanescent document.

The Tree House is a journey backwards, an act of exhumation. Far in space, the narrator begins–or resumes?–a conversation with his Earth-stranded father, while the camera trails up Vietnam’s mountainous interior in search for the indigenous folks who used to reside inside the many caves and tree houses hidden therein, before they were forced to relocate to the plains and cities sprawling below. They are the Kor and Ruc people, ethnic groups whose ancestral traditions and dwellings succumbed to the country’s urbanization as much as the Vietnam war and US invasion. Fearing the tree houses would be used by Vietcong communists, the American troops burnt them down, launching village resettlement programs that sought to relocate the natives, and effectively locked them in a protracted diaspora. Through the memories of the groups’ last surviving members, whom Minh Quý follows as they meander in and out of their old caves, their own forests, the now abandoned and derelict villages, The Tree House offers a time-capsule of what their life must have looked like before the cancerous combo of modernity-foreign invasion wiped it away.

What’s most interesting here is that the sort of digging-up Minh Quý embarks on unfolds on two interwoven levels. Tucked deep within the Vietnamese jungle, secluded and insular groups with their own cosmogonies and belief systems, the Kor and Ruc folks feel just as alien as the extraterrestrial land from where the unnamed filmmaker remembers them. On the one hand, The Tree House seeks to translate and articulate their traditions to a terrestrial audience–Minh Quý’s own. But there are other moments when the narrator takes pains to decode concepts that should ring a lot closer, a lot more familiar, and the conversation seems to suddenly address some inter-planetary public, the sort of viewers who would need to know that nostalgia “means to return home with pain,” and that positive images are “images associated with Life, negative images with Death.” It’s a peculiar, eerie shift, accruing as it does the feeling that humanity may end up forgetting its fundamental language, its shared roots, and laying bare what seems to be The Tree House’s key preoccupation: the relationship between one’s identity and one’s own memory, and the effects on the former when the latter starts to fade away.

There is something particularly moving in the several pleas the filmmaker voices to his father on interstellar phone calls, begging for details and memories of his own childhood on Earth, with the kind of urgency and longing of someone who sees his past drifted into a cloud in space, and dies a little with it. It’s a spasmodic need to remain grounded to one’s former selves, which The Tree House deftly juxtaposes with the local tribes’ own relationship toward memory. “How is it that I cannot recall anything that happened to me before I was four,” the narrator wonders while conversing with a Roc woman, while “she can recall all happenings when she was just two?” Minh Quý articulates the answer as a dichotomy images–imagination, the indigenous folks relying on the latter to fill in the gaps, versus our need to use the former to crystallize the past and consign it to perpetuity. But what does this make of The Tree House, as an act of recollection in its own right?

A piercing ethnography of minorities on the brink of extinction swells into a reflection on the role of filmmaking as a repository of memory, and vehicle for resistance. Interpolating Minh Quý’s own film with US-credited footage shot by locals during the war, The Tree House pokes at the history of malpractice in the ethnographic work it belongs to. What sets it apart from other entries in the genre is Minh Quý’s understanding that these ethical implications concern his own project, too. All throughout his homeward journey, there are moments when the narration pauses to question the reasons behind the search, and the repercussions of a documentary that will essentially “strip [the locals] of their right of anonymity.” They are not disingenuous concerns. The Tree House does seem aware it may unwillingly contribute to the shattering of the social fabric it brings onscreen, and Minh Quý’s strike as the sincere worries of someone who’s intimately connected to his subjects of study–however mysterious those connections may be. But while those questions are deliberately left open-ended, others find an interesting echo as the journey unfolds. Much like the natives shaped the roofs of their new city houses steep and tall like the mountains they left behind, The Tree House gradually embraces the lesson it uncovers along its singular interplanetary ride, morphing into an inventive, protean act of recollection, where images teem with imagination, and dreams with memory dust.

The Tree House premiered at the Locarno Film Festival.