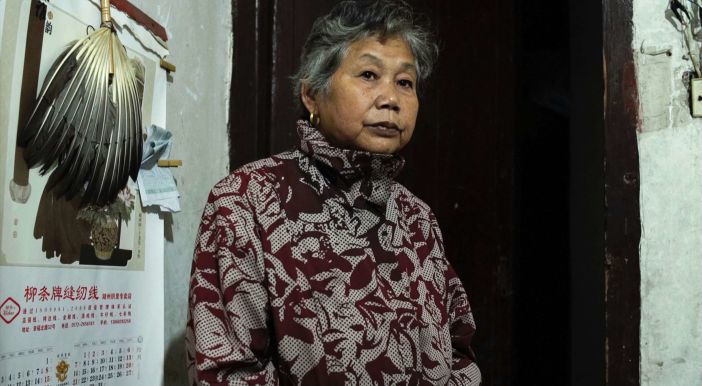 Mrs. Fang is a study of a face and a sober essay on death. It’s also about fishing. As profoundly moving as it is troubling, this new masterwork from documentary filmmaker Wang Bing might ask a great deal of anyone sitting down to watch it, both ethically and otherwise, but also, in cinematic terms, it delivers a great deal. The face in question is that of Fang Xiuying, an elderly farmer who died of advanced Alzheimer’s in 2016. Wang’s film is an uncompromising document of the last ten days of her life. Indeed, for obvious reasons, death filmed in this way remains something of a cinematic taboo, but any viewer willing to give in to the rigorous format and somber nature of what’s on screen might just find something cathartic.

Many of the best writers on cinema (Kael, Thomson, etc.) believe that the main key to what made the medium a populist art form was a simple human fascination with seeing other faces projected onto large screens (and if you happen to have the opportunity to see Mrs. Fang on a big screen, I suggest you grab it) and, furthermore, being allowed the privacy to adore or examine them. If that is indeed true then Wang takes it to a different level by patiently shooting a dying subject’s face in gentle close-up, thus offering a window onto that person’s most fundamentality vulnerable moments.

Wang begins with a small piece of footage from 2015, when Mrs. Fang — already in an advanced stage of her affliction — returned home from a convalescent house. The director immediately jumps forward to July 2016, by which point Fang is bed-bound, almost vacant and with only minimal use of her motor functions. Her family carries on around her, going about their business, discussing what her seemingly fixed facial expression — taut, wide-eyed, mouth somewhat agog — might mean. This sense of life carrying on seems central to Wang’s film. It’s not to suggest that the family members are disinterested, merely going through the motions as it were: funeral arrangements are discussed; dinner is organized etc. The simple banality of dying.

Wang shoots these moments from the back of a small room with Fang horizontal on a bed, occupying the bottom right of screen, with the family either standing around or on couches in the background. It’s impersonal and uncomfortable at times but respite is offered thanks to two sequences in which the men of the family head out to the river to fish. Using long bamboo shoots with nets at the end that appear to be hooked up to an electrical charge and lit only by torches and the orange glow of streetlights, the images hold enough of an otherworldly quality as to take you away from the reality of that room while simultaneously providing an all too potent visual metaphor of humanity reaching out in the dark.

Indeed, devoid of any narration or notable characters as such, this space for thought is certainly not in short supply in Wang’s film. The viewer might end up filling it with their own thoughts at times, about life and death perhaps, or about what the woman might be hearing or feeling, if anything at all. What’s more, however relentless it might be at times, the film is not without its moments of beauty. Fang occasionally has flashes of cohesion, it would seem. This might be muscle memory or perhaps something more. At one point she even reaches out to grasp her daughter’s arm and the filmmaker presents it as a final goodbye. Anyone who appreciates dignity or privacy should arguably have reservations about viewing something quite so personal. There are surprisingly few precedents for this in the movies, for good reason perhaps, so we should be grateful for bearing witness. Moments of such naked, solitary truth in cinema are in short supply.