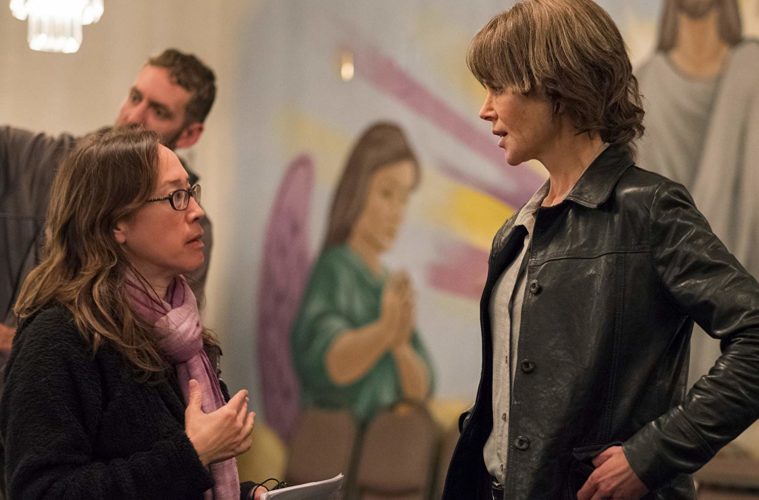 Ever since she made her feature-length directorial debut almost two decades ago with Girlfight, Karyn Kusama has given cinema some of its most memorable female characters. From Michelle Rodríguez’s fierce Diana in Girlfight to Megan Fox’s devilish Jennifer in Jennifer’s Body, Kusama showcases women from all walks of life, and in all kinds of genres, leaving a mark that the movies usually reserve for men. And yet, watching her latest film Destroyer–in which she tells the story of damaged LAPD detective Erin Bell (Nicole Kidman)–it becomes quite clear that Kusama wasn’t just giving us memorable female characters. She was creating some of the best characters, period.

As played by Kidman, Bell is a haunted creature, a specter almost, who roams the streets of Los Angeles trying to avenge her former partner, bring a crimelord to justice, and atone for her current sins. Kusama guides Kidman through a transformation that puts her at the level of iconic turns in films like Chinatown and Dirty Harry. Bell’s story is not only a window into loss and regret, but also a study of class, race, and gender in Los Angeles, a city where dreams are created and just as easily shattered.

We spoke to Kusama about the genres that influenced the style of Destroyer, her revelatory work with Kidman, and what she wishes men would ask her during interviews.

Watching Destroyer I kept thinking about High Noon, and how great it would have been to have another version of it told from the perspective of Grace Kelly’s character, who essentially becomes the hero at the end. Destroyer looks like a detective story but I think it’s very much a western. Is there any truth to that?

I love that you noted that, because something Phil [Hay] and Matt [Manfredi], my collaborators and screenwriters, had always talked about was this idea of Erin Bell as a broken down cowboy in a lawless Los Angeles. There’s something about going back and forth from the past to the present that’s this kind of psychological wilderness that she travels across. I do think the film should feel like it’s related to these beloved genres: crime thrillers, westerns, cop dramas, that in my hope allow us to feel some sense of orientation, that might allow us to relax into the movie. And then I hope the movie pushes back and says it’s not simply a cop drama or a reinvented cop character, but that we’re getting closer to watching a singular human.

There’s also something else that’s important to note and it’s that even though if your films are often reduced by some critics as being only about gender-swapping and having women play traditionally male characters, there’s absolutely no truth to that.

I resist the idea that complicated, morally ambiguous characters are reserved for men, as if that’s a space only they can occupy. But I also resist the notion that we see so many of those roles for men, because we don’t. I’d like to see more, actually.

And sometimes when we see the tortured cop or the cowboy on his last ride, that’s usually all they are. While Erin Bell is so much more than that. She lost the person she loved. She doesn’t know how to love new people. She doesn’t even know how to show her own daughter love. She’s a reminder of all the richness that being a woman brings to a character.

Yes, I hope it also challenges our fantasy that women are by their very nature emotionally available, and men are not. What the film reveals is that Erin’s greatest struggle is in reconciling her own emotional life to the world and herself. Nicole said something really interesting about Erin after we finished the shoot, that what animates the character is that she’s so shut down. I hadn’t realized while we were working that that’s what drove her, but of course that’s what most present to her, that Erin doesn’t even know sometimes that she’s in a feeling state. I identify with that, there are moments when I go, “Wait a second, I’m really feeling a lot right now.” And it takes over other aspects of my life I’m not even aware of. That’s very human. I hope women and men can identify with it.

One of the first things that impressed me was when I noticed Erin’s walk. It’s steady but slow, slightly hunched, as if she’s carrying the entire weight of the world. In an interview you did you mentioned that making the film you were thinking a lot about all the shit going on in the world and how the news is so horrible. Reading the interview made me realize the reason why I was struck by Erin’s walk was because that’s how I feel I walk every time I think about the world as well.

[Laughs] Totally! I empathize. I’m right there with you. I also had said this to her offhandedly, and that’s the brilliance of Nicole: she takes in all these details, files them away and only later do I understand how much she was absorbing of our conversations and truly listening, which is such a skill. Anyway, I told her that sometimes when I walk people ask me why I was limping. And I’d say, “Am I limping?” It doesn’t happen often, but people sometimes do ask me if I broke my ankle or something. I’m sort of in a broken state and I don’t even know it. I wanted her to understand I see myself as someone so hobbled and imperfect, and I was really struck by that walk feeling half like a wounded animal, and half sort of like an iconic cowboy. This is what the war of one’s own life can look like after a while, it shows up in their face and throughout their body. It vibrates through every part of their physical being and Nicole really found that instantly.

Which is why it bothers me that so many people only talk about Nicole’s makeup and the look.

One of the things I found really beautiful about what you did was that, like Kubrick and Glazer, you do so much with her eyes. You look right into Erin’s soul.

I’m really happy that’s how you experienced the act of looking at and communing with the character. I feel like the goal of the film was to get closer to this woman and to evoke the feeling of intimacy with the character, and that by the end of the film the mystery of her life isn’t entirely figured out or unraveled, but that we get a little closer to answering the question of what happened to her. How she’s really hunting herself and the audience is investigating her. I hope it leads to a bigger question of what precipitates our greatest downfalls and our best moments. How do we get there?

I was very happy with the Los Angeles you portrayed. You showed us a city with such cultural richness in such a way that we understand that Erin is just a little piece in a huge system.

Exactly, you bring up the point that she is just one person, and yet part of her job demands this sense of understanding neighborhoods, communities, and geography. I’ve lived in L.A. for 15 years, Phil has lived there for 25, and Matt was born there, so to us, it’s one of the most culturally/ethnically diverse cities we’ve ever experienced. It’s so vast and there’s so much getting represented there. The movie wouldn’t make sense if we didn’t see Erin keeps entering these private worlds that are going about their business, whether it’s Chinatown, Compton, Filipino town, or Echo Park–there’s so much richness in that environment. My one regret was I wasn’t able to penetrate the Armenian community in Los Feliz which is where I live, because it’s such a fascinating community.

Given the richness of the communities you show, was it hard to go back to Erin rather than follow someone else in their story?

That’s a really interesting question because I think the best movies have that quality of feeling like there’s a story with every character that maybe you don’t get to see, but you lean in and your interest is piqued. For me, it was in post-production that I discovered how important it was that we stayed with Erin. There were threads in the film that aren’t on the screen now that gave us more detail about Petra (Tatiana Maslany), Arturo (Zach Villa), Toby (James Jordan), Silas (Toby Kebbell) and about Erin’s partner (Scoot McNairy). But the movie felt overwhelming and disconnected when I gave them too much weight. I realized the purest expression of the movie was introducing Erin Bell, a series of questions that point to a larger mystery and then attempting to answer them, and that required being with her in a very intense way. My editor, Plummy Tucker, said as she was getting the dailies as the editor what she wanted to watch was Erin. That really guided the process.

Destroyer is so class-conscious. The Bradley Whitford rich, corrupt lawyer character made me think he’d fit in right into The Invitation and be one of those people who light the lanterns and kill people for sport.

You’ve mentioned wanting to do an L.A. trilogy, so what would follow The Invitation and Destroyer?

If I were to do a third part it would be about Hollywood, and about the business of manufacturing our fantasy life. I feel so much of what Los Angeles offers, in good and bad ways, is the promise of reinvention. There’s a monstrosity to that, and we’re also at the center of movies that have given the world so much access to deeper expressions of our unconscious, so how do we deal with the power of these sometimes adversarial elements? How do we deal with this concept of manufacturing dreams? What do we do with the reality of sometimes having artists bring these dreams to life on the screen? For me Destroyer was about the act of witnessing a slow process towards the act of looking inward, and it comes at a very high price. Part of The Invitation was focused on narcissism and self-empowerment obscuring a larger question that needs to be investigated which is the denial of feeling. That’s a big part of what animates Destroyer too, how we crumble when we deny ourselves our emotional life.

Journalists always ask female filmmakers the same questions–what’s it like to be a woman in Hollywood? Can you talk about the #MeToo movement?–and it’s usually white men asking you the questions.

I’m sure it gets exhausting having to answer the same things over and over again. So what do you wish white male journalists would ask you next time?

I don’t feel I’m being asked the important questions and I often need to insert myself into the process to remind them we’re here to talk about the work itself and what are the aims of the work. I feel a sense of rising panic and fury about the state of our world and I need to find constructive ways to deal with these feelings of helplessness and a lack of control. I hope part of why my work is the way it is, is informed by the fact I’m attempting to make sense of corruption, depravity, and maybe even the presence of evil. I’m trying to understand how we get ourselves out of this mess. I wish we could be talking more about this idea that the personal is political. Destroyer is highly personal and political, it talks about the nature of personal corruption and how inevitably leads not only to personal downfall but also to the downfall of those around you, who are also affected by moral laziness.

Destroyer opens in NY/LA on Christmas Day and will expand in the coming weeks.