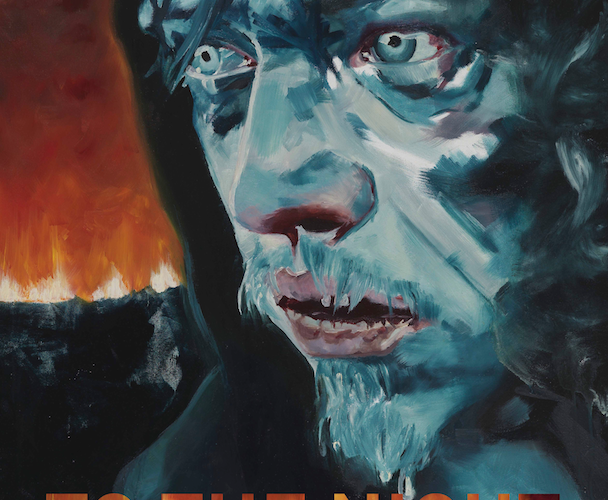 Karlovy Vary Review: ‘To the Night’ is an Unrelenting Showcase for Caleb Landry Jones

If you, as I, are the type to presume that a “dramaturgical assistant” is some form of midlevel job in a hospital’s oncology department you might be startled to see that none other than the great Michael Haneke is credited on the promotional material of To The Night–an unrelenting new work from filmmaker Peter Brunner–as being that very thing.

We are, naturally, being rather facetious here. The film in question, which follows an artist/arsonist’s (artsonist’s?) creative attempts to get over the horrific loss of his family–who perished in a fire from which he himself was the lone survivor–is in fact the third feature film from Brunner, a 35-year-old Austrian director who was, as it turns out, a student of Haneke’s at the Vienna Film Academy. If one’s old professor happens to have two Palme d’Ors and an Oscar lying around, why not ask them to assist on some dramaturgy?

In a similarly interesting turn, To The Night was also co-produced by UlrichSeidlFilm, the production arm of that other great Austrian provocateur and if the sight of those two names in a roll of credits doesn’t whet your degenerate appetite then you might be in the wrong theater. Or, perhaps, you might not. Indeed, Brunner’s film is finely made but its style might be too expressionist to satiate fans of Haneke’s austerity, and the mood too dour for admirers of Seidl’s more mischievous brand of misanthropy. With great dramaturgical assistance come great expectations, it would seem.

A pleasingly tweaked Caleb Landry Jones plays Norman: full-time artist, part-time firestarter (twisted firestarter) living with a girlfriend and a newborn in a large industrial art studio in the Southern reaches of Brooklyn it appears. We soon learn that Norman’s obsession with all things flammable extends back to that early trauma: escaping from the fire that engulfed his family’s grand country home and took their lives with it. Norman’s artistic endeavors all appear to be in some way the man’s attempts to recreate the horror of that moment. However, whether he is attempting to come to terms with it or merely punish himself for his inability to act might be a question for a much-needed psychiatrist.

The film’s working title was We Are Sisyphus, which might give you some idea of the laborious slog that is Norman’s life but it may also, regrettably, suggest a note of pretention, too. Landry Jones is excellently unhinged in a rare lead role–continuing what seems to be a concerted attempt by the young actor to shape his angular good looks into something more cadaverous—but it’s difficult to buy his situation, nor those of the people around him. Safdie Bros alum Eléonor Hendricks is just as astute as Norman’s long-suffering wife Penelope and yet we’re never quite offered enough reasons to explain why the comparatively grounded woman has put up with said suffering for so long. You sense a film crying out for a touch of levity that, if nothing else, may counterpoint all this wonderfully executed foreboding.

Norman’s narcissism, misery, and alcoholism lead him to points of various desperation, first taking in an even more off-kilter man (a partner in crime of sorts named Andi who is played by Christof Haas) and later recruiting him to help with his increasingly elaborate self-therapy sessions which seem to consist of combining things that should probably never be combined such as a) copious amounts of ketamine and a bathtub and b) a fish tank, gasoline, and a tesla coil.

Such explorations in self-harm make one think of earlier Haneke (The Seventh Continent, Benny’s Video, The Piano Teacher) but it was the starkness and the seriousness of those films that elevated them from simple misery porn (even if many, at the time, still labeled them as just that). To The Night certainly should not be labeled as such either but there is the sense that Brunner may be basking a little too often in the spectacle of his grim creations. Indeed, shot by cinematographer Daniel Katz (who was a lighting technician on the U.S. version of Haneke’s Funny Games), the aesthetic might look, at times, like an elaborate Nine Inch Nails video but, despite all the grunge, it probably owes more to Terrence Mallick then Brunner’s esteemed countrymen.

To the Night premiered at the 2018 Karlovy Vary International Film Festival.