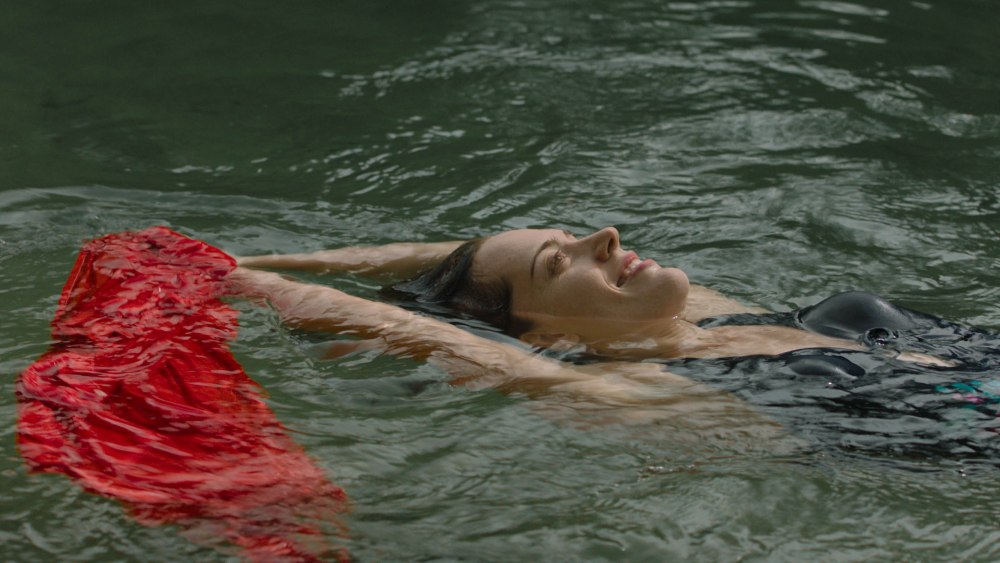 In the new movie The August Virgin, a young woman named Eva wanders the sidewalks and watering holes of Spain’s sunny capital on a series of increasingly hot, clammy nights leading up to August 15th–or “The Assumption,” as some like to call it. It is a heartbreakingly tender, intoxicating stroll of a movie, as disarming as it is melancholic and as finely considered regarding its protagonist’s mounting worries and catharses as it is obsessed with balmy urban nights and the effect that they seem to have on our human thirsts for conversation, a little booze and, yes, longing.

Eva’s played by Itsaso Arana, who gives a beautiful, transcendent performance as a woman at a crossroads in life, if not quite a dead end. Recently single and unemployed, we’re introduced to her as she views a potential sublet (if there is a greater metaphor for transience we have yet to find it). We warm to her immediately: thoughtful, sharp, and effortlessly chic in bright shirts and oversized Levis, her confident demeanor only betrayed every now and then when old disappointments and heartbreaks arise. In one crippling moment she runs into an old flame outside a theatre they once frequented. That relationship, we soon learn, has just ended, as did her career as an actress. Life choice considerations have been triggered by less.

It’s directed by Jonás Trueba, an up-and-coming Madrilenian who first cast Arana in his 2016 movie The Reconquest–a story about old love rekindling in autumn. Unlike The Reconquest, however, The August Virgin–a story about the promise of new love in summer–was scripted by Arana and it’s her intimacy with the material that protects it from what could easily have been an exercise in navel-gazing. This intimacy merits consideration, heavy as the movie is with the anxieties of a woman at that stage of life, not least an actress–though Arana and Trueba leave her reasons for taking a break from the craft ambiguous. What is not left ambiguous is the societal pressure to have kids, perhaps the film’s chief concern (biblical leaning title and date withstanding).

The setting could hardly be more essential and minds will inevitably turn to Linklater’s untouchable Before Trilogy–three other Euro-set films about sunny, cultured days giving way to warm, passionate nights–but Trueba‘s movie is different, coming as it does from the eyes of a native. It is, much to its credit and allure, drenched in that local knowledge and the sense of a movie that has been location scouted for an entire life. Journeys are thus almost always taken on foot, lest we miss the chance to see another pulsating bar or beautiful street corner at dusk. Indeed, The August Virgin is very much a film about bars and walking and, at its very best even offers the sensation of what it might feel like to be in the Spanish capital on one of those long summer nights, with all their inherent promise, sweat, and possibility.

No moment, shot by D.P. Santiago Racaj, is less than gorgeous but the film does frankly lag a little on some chunks of its two-hour-plus runtime. Three handsome men come into Eva’s orbit at different points, one cultured and pretentious; one cute and political; one aloof and a little sad. It is the middle of these that sticks in the craw just a touch, a dreamy socialist who charms Eva with communist protest songs after hopelessly trying to chat her up in a drunken stupor mere moments before. The vague hint that Eva might ditch men altogether is tantalizingly floated but never fully explored. It proves one of many loose ends that Trueba and Arana leave dangling. Indeed, long as it is, by the time the credits roll–the spell of summer finally broken–you might sit wishing they hadn’t.

The August Virgin premiered at the Karlovy Vary Film Festival and opens on August 21.