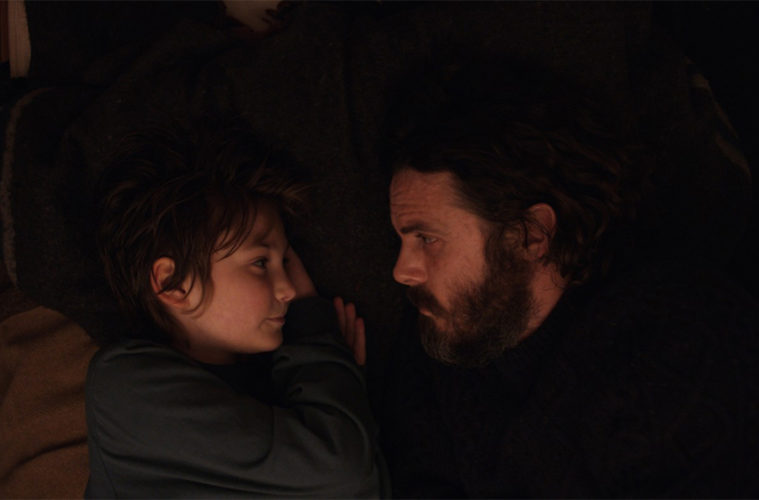 The new film from Casey Affleck arrives at the tail end of a smattering of telling coincidences and sliding door moments. In February 2017, he won an Academy Award playing the lead in Kenneth Lonergan’s Manchester by the Sea, a film that was originally intended to be the directorial debut of one John Krasinski. That actor would eventually release his next directorial effort A Quiet Place in spring of 2018, a few weeks after Debra Granik’s somewhat similar albeit sci-fi-free Leave No Trace had premiered in Sundance. A survivalist, eco-sensitive, sci-fi/horror hybrid that Krasinski wrote, directed, and starred in, it did gangbusters while Granik’s film was warmly embraced by critics and audiences. And now we have Light of My Life, a survivalist, eco-sensitive sci-fi/horror hybrid that is written by, directed by, and starring Casey Affleck.

The allegations against Affleck that resurfaced around the time of his Oscar win (sexual harassment suits dating back to 2010 that were financially settled out of court) have been well-documented, and it is tough to consider his first narrative feature as a director without them coming to mind. Indeed, it’s tough even to say what’s more surprising here: the fact that the first narrative he has produced as writer-director concerns a world in which women have been almost eradicated by a new disease, or the fact that he handles the topic with such remarkable care.

Yes, this really is the central conceit of his new dystopia, a derivative but surprisingly tender and fiercely engaging piece of speculative fiction called Light of My Life in which Affleck stars as Caleb, father to Rag (relative newcomer Anna Pniowsky), a young girl who was born just before the so-called “women’s plague” hit and was one of the few to survive. We enter the story a number of years after. Women are being hunted down–for reasons left to the imagination of the viewer–so Caleb and Rag (who must hide her burgeoning femininity as best she can) roam the land in search of safe spots where they can make camp or settle down for a while. We are given hints as to how much society has unraveled–dangerous trips are occasionally made to more populated areas for supplies; people talk about things like “compounds” and “federal dispensaries”–but for the most part Affleck lets us fill in the gaps.

One need only read that brief synopsis to surmise that the director has cherry-picked from some of the best science fiction of recent years (Children of Men, The Road, etc.) and, for all its qualities, the film does frankly follow the beats of those that have come before. We begin in a secluded campsite in a national park but later move to various other properties, each slightly cozier than the last. We expect the bad guys to show with each further lowering of the guard.

Light comes amidst a wave of recent films about disparate families living off the grid (Leave No Trace, In My Room, Captain Fantastic, The Glass Castle, etc.) but differs due to the fact that its protagonists have little real choice in the matter. The way of life is thus less romanticized as in those other movies, although not entirely, and I couldn’t resist the idea that Affleck (now 43 and with 2 teenage sons)–like Kransinski (39), who even cast his wife, Emily Blunt, beside him–maybe wouldn’t mind a world without social media and mobiles phones, and one in which your kids hang onto your every word, happy to be spoon-fed passages of Plato’s Ethics. Perhaps only Granik’s film has truly gotten into the nitty-gritty of the effects such an upbringing might have on a child.

Affleck has always been a wonderfully understated performer and he has taken that minimalist approach with him behind the camera: fight scenes seem designed not so much to thrill as to be endured; ambiguities are left nicely cryptic; moments of chase are never rushed; nor is the camera. D.P. Adam Arkapaw (who shot, amongst other things, season 1 of True Detective) finds menace and beauty in the late autumn hues of B.C.’s Okanagan Valley (standing in for the Northwest). Elisabeth Moss graces us with her presence, in flashback, as Caleb’s wife.

Then there is Affleck and Pniowsky, whose chemistry is this movie’s life and soul and is best sampled through their father-daughter exchanges, like when Caleb attempts to have “the talk” or tries to explain a stranger’s sexist and racist remark. Light of My Life opens on one such disarming moment and Affleck shoots it from above in an unbroken take with the characters lying face-to-face, as if nothing else in the world ever mattered. Affleck repeats the sequence a number of times throughout Light and it becomes a moving visual leitmotif, a powerful reminder of how high the stakes are.

Light of My Life screened at the Karlovy Vary International Film Festival.