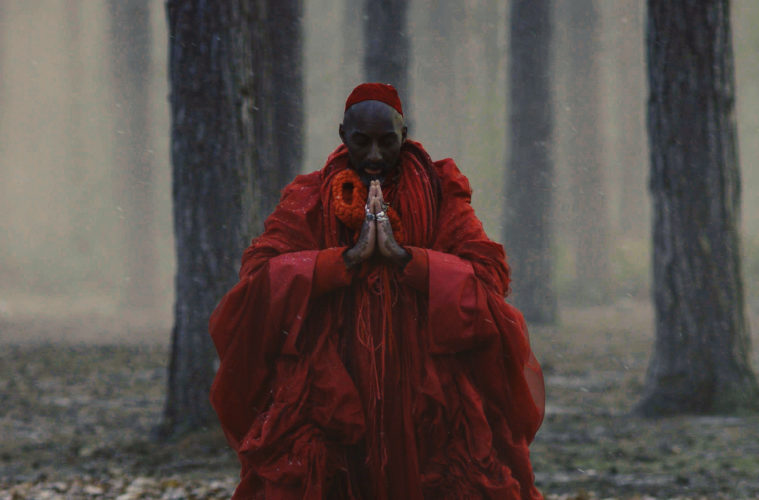 On the festival circuit, one section that often goes overlooked is the short films that are presented, sometimes in their own, curated block and sometimes at the top of a programmed feature. It is a tragic product of the fast-paced, over-saturated environment that is film journalism. So when one catches some attention, it’s a welcome moment.

This year at Sundance Film Festival, a creative collective calling themselves The Ummah Chroma premiered a short film entitled As Told To G/D Thyself. It’s a piece of art inspired and built from the music of jazz master Kamasi Washington’s recent album Heaven and Earth. Washington is part of The Ummah Chroma, along with editor Marc Thomas, cinematographer Bradford Young, director Terence Nance, and producer/director Jenn Nkiru. Together, this quintet directs an engaging short that explores multiple visual mediums (animation, live action in color and black-and-white) accompanied by re-arranged audio from the aforementioned album. The throughline of the short concerns each person’s relationship to God, or god, or G/D. What does your faith (or lack thereof) mean to you?

The Film Stage spoke with Kamasi Washington and Marc Thomas at Sundance, talking through these themes, the process of marrying music with visuals and the universal truths that can come from experimental cinema.

The Film Stage: I watched the short a couple of times and find it really interesting. My first question would be how does the group form? The Ummah Chroma? How does that come together?

Kamasi Washington: Well, so, when I was making the album (Heaven and Earth) even as I was recording it felt really visual. Even though I was recording with musicians, a lot of the time I was using more visual references than musical ones. And so, with that, I was really planning to do something–to have an expressive visual representation of the music.

And this is while you’re recording the album?

KW: Yeah. And I had already met Brad[ford Young], and we just vibed. I loved his work. And I was looking for a reason to do something with him. So I hit him up and told him that I was working on the new album, sent him some of the music, and he was on board. He and I started having conversations… just about the music, what it meant, and about what we wanted to create visually to represent those same feelings and emotions. In those conversations, he brought up the other members of the group. I was already familiar with Terence’s work and had actually met with him and we had talked about maybe doing something together. Brad introduced me to Jenn [Nkiru] and Marc [Thomas]. It was kind of one of those things where as we figured out what we wanted to do we would think of people who could help us do that.

So basically you were looking to work with these people to make this thing that you’re thinking of visually, and then the team forms to some degree. Is there an initial nugget for what becomes the short, creatively?

KW: We had a lot of conversations about the music and what it meant.  The first person to have a concept of something to do was Jenn actually. And Jenn kind of created her visual components first. We wanted to have some momentum going into it so we got the funding we had from Young Turks and we put that into Jenn and Jenn kind of set the tone for where we were going to go with it. And then we started talking more about what we were going to do with the rest of the film. Terence was the one who was able to cultivate all of these talks and ideas into something that was like a story. Or a treatment.

Did you have a traditional script going into filming?

KW: There was talking about the ideas. That turned into a thing that was pretty loose. And then Terence came in and turned that loose thing into something that we could really see. Read it and go like, “Oh, we can make a shooting plan.” Plan shots and scout locations. And then we shot it and that was different. Then we gave it to Marc and it became something different again…which actually had been closer to what we were talking about [at the start]. It was weird. It kind of went through this journey of like… we had a plan for something and then when we made it, it became closer to the album…

Now that the short is done and out, how does it play to you in comparison to the album? Like a visual companion?

KW: Yeah, it’s almost like a brother to the album… [all the music] you hear in the movie is from the album but a lot of it is repurposed. So I took the strings from this song, the bass from this one, songs that are overlapping.

Marc, you were overseeing the post process, then. Can you talk about that a bit?

Marc Thomas: Yes, I was the editor. But Terence also. I also tend to do a lot of sound [mixing]. I have a music background as well so…

KW: [Marc] was with us, with me and Russ Elevado, when we were repurposing the music…

There’s a lot happening in this short where you’ll have moments that feel very personal. But on a macro level it’s this piece about how we relate to the stuff we believe in–the praying at the end feels like a nice period at the end of a sentence that helped me as a viewer go, “Okay, I see what we’re talking about here.” Does that get discovered in the edit? You capture the moments and then place them where it feels right in the edit?

MT: This very much felt to me like a collage. So the pieces start coming together and you start playing and asking, “Hey, what does this mean with these pieces next to each? and, wow, what does this mean?” Obviously that’s always the case in the edit but also we’re working with music that was both inspiring and fulfilling a role where there’s this kind of cycle that’s happening. We had shots that were also being repurposed, to give a third meaning that we had not really thought about. We started to try and paint with emotion and with what felt strong. We were able to move away from the more narrative approach and create a feeling and a punctuation and movement. That’s something that you really can’t anticipate until we were the lab, you know? [Laughs]

KW: Because the genesis came from an album that is mostly instrumental. We hear an instrumental record and there’s a feeling in it like, you listen to an album and everyone gets something different but everyone also gets something that’s the same… and I think this process was the same thing. Each one of us had a different relationship to it and what it is. So for me there is a kind of story. I wasn’t there [when they were editing]. I knew they had a connection to the music and if I’m in there when they’re doing that it’s going to make it a little more mirrored to the music?

You want to let them do their thing.

KW: I knew that they felt that core that I felt. And once we put music to it we felt like “Oh, this is that complete, two pieces of a whole.” Like I said before, the treatment, the story, all of those things were bending and changing at every stage but the feeling you got from it was constant. We all wanted it to feel like a piece that, each person that saw it could create within it. That’s part of the energy of it and that’s definitely within the energy in instrumental jazz music, improvisational music. There is not one way. But there is a way. [Laughs]

When we’re in the forest scene [in the short], those designs, those wardrobe designs, and character designs, do they come from a specific religious reference of some sort? Is it totally original?

KW: So we talked and then I sent [Jenn] the music and then like two or three weeks later her head was just going. So she created those [designs] from the feeling the music had. As a musician, emotions and feelings are not as elusive as some people think they are. I can see a feeling. And I think that she heard the music and saw the feeling. And then as we do the project the feelings take on personalities. That’s why the character [in the forest] that you see in red, we call him God.

Sure, well that comes through watching it.

KW: I don’t know that she always intended that to be that but it’s the same thing. It’s like, “What is D-minor?” It means something different depending on what you’re doing with it.

MT: A significant part of that is the music playing behind that. If you were to have that shot on a completely different kind of track again it might take on a totally different kind of meaning. He’s still a very regal figure but I think that was part of what was an interesting process of discovery.

Right, traditionally you would film something and then approach a composer to make the music to match the visuals. Here it’s kind simultaneous almost, it seems?

KW: Well, it’s a give and take. You have the music and then you say, “Okay, I’m going to create something to go with this.” It’s almost like twin brothers but one came out the womb first. As they grow up they affect one another.

As Told To G/D Thyself premiered at the Sundance Film Festival.