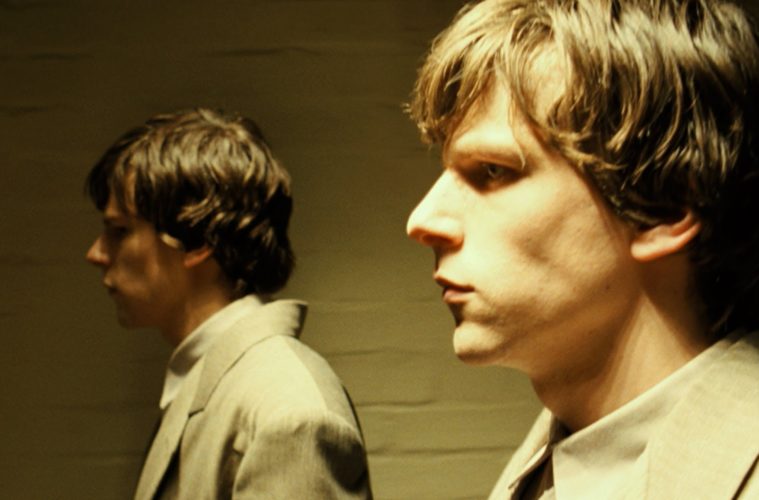 Jesse Eisenberg Doesn’t Want to Die In New Trailer For ‘The Double,’ Set For May U.S. Release After premiering on the fall festival circuit and then stopping by Sundance last month, it’s now time for Richard Ayoade‘s Submarine follow-up The Double to unspool in theaters. While we’ve known it’ll hit the U.K. in early April, Magnolia Pictures have recently unveiled that the drama starring Jesse Eisenberg and Mia Wasikowska, will hit VOD and and theaters in the U.S. on May 9th. We now have a haunting, impressive new trailer for the film, which recounts a story of two snakes.”

We said in our TIFF review, “as adapted by the helmer and Avi Korine, The Double brings Fyodor Dostoyevsky‘s novella to the big screen with a surefire confidence in its visual form and an eccentric comedy that should go a long way towards securing the IT Crowd star as a permanent, unique voice in contemporary cinema. There is a definite stylistic kinship to his first film, pairing it well with this one’s descent into a psychological conflict of identity: every waking second of Simon James’ (Eisenberg) entire existence shatters with the introduction of a confidently superior doppelgänger named James Simon.” Check out the new trailer below, courtesy of StudioCanal, for the film also starring Wallace Shawn and Noah Taylor.

Simon is a timid man, scratching out an isolated existence in an indifferent world. He is overlooked at work, scorned by his mother, and ignored by the woman of his dreams. He feels powerless to change any of these things. The arrival of a new co-worker, James, serves to upset the balance. James is both Simon’s exact physical double and his opposite – confident, charismatic and good with women. To Simon’s horror, James slowly starts taking over his life.

The Double hits VOD and theaters in the U.S. on May 9th and in the U.K. on April 4th.