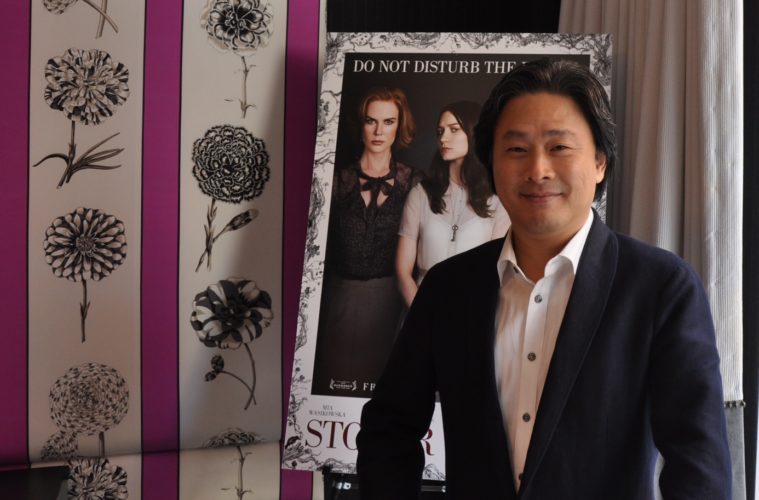 Stoker, the English-language debut from revered Korean director Park Chan-wook, is an odd blend of American gothic sensibilities married with Hitchcockian levels of suspense. The film stars Mia Wasikowska as India Stoker, a brooding adolescent girl who, after the sudden loss of her father, becomes increasingly detached from her emotionally unstable mother Evelyn (Nicole Kidman). But when the mysterious arrival of Uncle Charlie (Matthew Goode) displaces the mundane routine of India’s life, she becomes entangled in a web of evil that is both impossible to escape and intrinsically part of her nature.

Masterfully directed, beautifully scored by Clint Mansell and increasingly creepy with every twist and turn, Stoker features some incredible moments of pure unadulterated cinema. I was fortunate enough to sit down one on one with the legendary filmmaker to discuss the challenges behind working in a foreign country, what attracted him to Wentworth Miller’s script and what he thinks about Spike Lee’s remake of his most famous film, Oldboy. Check out our conversation below, featuring answers from Park Chan-wook’s translator.

The Film Stage: What attracted you to Wentworth Miller’s script for Stoker as your American debut?

Park Chan-wook’s Translator: What really sparked his initial interest is the fact that the protagonist of the script is a young woman, the same age as his own daughter. This young woman could be going off and shooting guns or doing whatever, but he loved how this script is purely focused on being a coming of age story of a young girl and as a father, it’s something that stimulated his interest and that’s why he went ahead and added elements like Uncle Charlie pushing the glass of wine and saying “to India, 1994, the year you were born,” which is the year his daughter was born. There was something that initially attracted him to the script. Evil and revenge have been themes that have dominated your work, including Stoker, what attracts you to these darker themes?

Because it is something that he finds inside of him, as much as he expects it’s within everybody. And how he wants to turn his face away from this truth makes him uncomfortable because, who likes to face their own dark side? It makes him uncomfortable, how he finds himself not wanting to face this dark side of himself as much as he would imagine other people would, he feels it’s something that needs to be explored and not something to turn away from. You have to put this in the light and study it.

How do you pre-visualize some of the more dramatic sequences in all of your films, but in particular, this one. The piano scene, the dissolve from Evelyn’s hair — do you have storyboards, pre-visualization, 3D stuff?

So of course, his story was everything, as you know, and he doesn’t dream up these or visualize these. When we say “pre-visualize” not in the conventional sense where you make use of the simplified 3D, but in the bigger umbrella concept. When he pre-visualizes this, he doesn’t do it alone. He does it with his DP and everybody who needs to be involved in this thing, including the production designer, of course. Let’s say, take the piano scene for instance. They visit the already scouted location way before the shoot and compare it with the storyboard and make sure that what he has drawn up in the storyboard is actually feasible, it’s achievable and as with any scene, it has to work with the actors as well.

So, even after the storyboard is drawn up and has been adjusted to be feasible within the physical location, he will go through the stage of going to his actors, Matthew and Mia, practicing the piano and rehearsing this scene and he would bring everybody together to watch what they’re doing and to really find out, “is the storyboard the best visualized form?” What he already visualized, “is that the best way to express this scene?” He would constantly question himself. And at the same time, technically, “is this feasible?” is also something he would question everybody who was there to watch the rehearsal.

And the effects team’s collaboration is essential in achieving such scenes but more acutely, in the second scene that you mentioned, in the transition from hair to grass, and that’s a very typical example of where the collaboration with the FX team is essential. Shooting the brush scene, that’s the easy part, but a high angle shot on the field of grass required a lot of preparation and in both instances he would have the VFX supervisor on hand and he would give the VFX supervisor the writings so that he can supervise the shoot of it to make sure it’s feasible and is true to Park’s intentions, which have been communicated to him and he is well aware of. Did you ever have any hesitation in making an English-language film and what was the biggest challenge with working with a translator with all your actors?

Well, he can’t reveal the name, but there is a Japanese film director that director Park has always liked and there was one film that this director did where he brought all these Korean actors from Korea and made a film. And these actors were excellent actors and the director was a great director but the performance in that particular film he felt was quite off. There was something strange about it. So, back then watching that film, director Park thought, “perhaps he shouldn’t be doing something like that, working with actors of another language.” How did he overcome that hesitation? He can’t remember! Maybe it was a function of “ah, I might as well go ahead and try it and see what happens.” But as to what the outcome is, he’s certainly satisfied with all the performances that his cast gave him. But the thing is, English is not his mother tongue, it’s not his native language. So, if you pose a question and say, “is your level of satisfaction perfect standard to which all audience subscribe?” When is comes to delivery of the dialogue, it’s not a perfect standard to go by, probably. And he’s actually curious what you and all the members of the audience in America think about the delivery of the dialogue, for instance.

It was perfect to me.

Can you talk a little bit about your thoughts on Spike Lee doing the Oldboy remake? Has he reached out to you about his interpretation? There was recent news about the Sympathy for Lady Vengeance remake with Charlize Theron. Do they reach out to you or are you just letting those projects develop on their own?

Well, he has never met Spike Lee, but the producer on Oldboy remake is a friend of director Park, so he is always kept in the loop as to news of what’s happening. With Charlize, when his original Lady Vengeance was introduced to America, there was a time when he was introduced to Charlize but neither with Oldboy or Lady Vengeance, there was never a conversation about how they would interpret it and director Park never really got in the way by saying, “well your interpretation is so and so.” There was never an instance like that because he wants to avoid interfering with their remakes and if he was in their position — if he was Spike or if he was Charlize — he wouldn’t have wanted anyone interfering with his own work or his interpretation. So it’s something he wants to be really careful with and not really step in and rather he would wait for the films to be completed and watch the completed film and be surprised, amazed by what they’ve done with it and be able to congratulate them. Stoker is now in limited release.