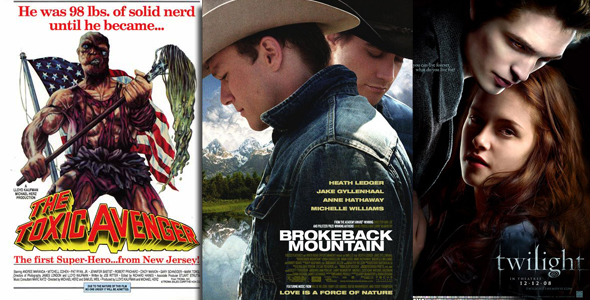 One of these things is not like the others...

IFTA (Independent Film and Television Alliance) has placidly posted their top 30 independent films of the last thirty years, and their rankings have the blogosphere riled.

The films (which will be screened in the Egyptian Theatre in Hollywood) are listed as they appear on IFTA’s site below.

” The Most Significant Independent Films from each of the past three decades follows:

Deadline decries the absence of Boogie Nights, Seven, Sling Blade, The Crying Game, The Passion of the Christ, Drugstore Cowboy, Blood Simple, She’s Gotta Have It, A Room With A View, Sid and Nancy, El Mariachi, My Life As A Dog and In the Bedroom and the inclusion of The Toxic Avenger, while noting the film’s creator, Lloyd Kaufman, was one of the decision-makers.

While Get the Big Picture questions Twilight’s place on the list, and declares Slacker, Kill Bill and the work of indie luminaries Wes Anderson and Paul Thomas Anderson have been snubbed.

Since the whole point of IFTA’s list seems to revolve around a film screening series, I’m curious how much ticket sales and print availability affected this list. Regardless, the list is sparking discussions about the definition of independent cinema and the successes therein.

I was personally surprised to see that The Terminator, Braveheart, and Lord of the Rings were counted as independent productions, and shocked some of my favorites didn’t make the list.