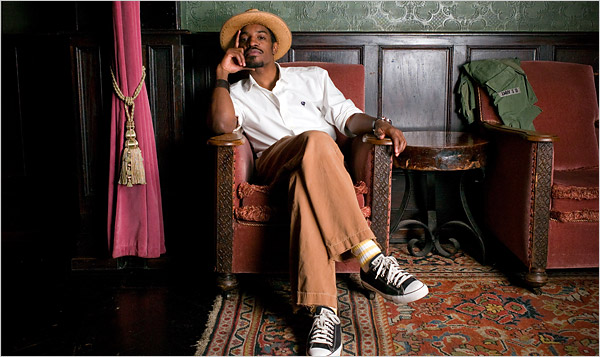 I first heard about this project years ago – on a now-defunct and long-forgotten FX show called Sound F/X – which featured Orlando Jones, of all people. Lawrence Fishburne was once set to play Jimi Hendrix, but it never happened. A 2010 attempt to film the rock star’s life – to be directed by Paul Greengrass and backed by Legendary Pictures – was also thwarted when the famously protective Hendrix family denied any access to the man’s iconic music.

Now after some earlir rumors, Deadline reports that one half of OutKast (the fun half, some might say), Andre 3000 (AKA Andre Benjamin) is confirmed to play Jimi Hendrix in a biopic called All Is By My Side, to be directed by Three Kings screenwriter John Ridley, based on his original script. The kicker: it will take a sort of prequel approach, depicting the singer-guitarist in his years before he became the psychedelic guitar god we know and love. Also joining the cast is Haley Atwell and Imogen Poots.

This is due in no small part to the Hendrix family’s refusal to allow the filmmakers to use any of Hendrix’s groundbreaking music in the film. At first glance, this all seems like a colossal bummer. However, there is at least one film that can compare to this kind of project, and it’s about a bunch of rock & rollers whose impact on popular music and culture surpasses Hendrix’s own: 1994’s brilliant Backbeat, which covered the wild Hamburg years of The Beatles, and featured not one note of their famous later works.

All Is By My Side will instead focus on Hendrix’s formative years, which are impressive, yet overshadowed by his later rock stardom. After a stint in the Army, James Marshall “Jimi” Hendrix honed his craft as a backup musician and session player for an array of early rock and Motown talent, including Little Richard, The Isley Brothers, Jackie Wilson, and Sam Cooke.

According to the late rock star’s estate:

“To the best of our knowledge, this production never approached Experience Hendrix about licensing the music,”

Which means they were probably wise enough to not even try. Still, if Ridley and company are smart, they’ll use Backbeat as a model. That film focused on the close relationship between John Lennon (Ian Hart) and their original drummer, Stu Sutcliffe (Stephen Dorff). Freed from the constraints of the band’s legendary – and daunting – later legacy, Backbeat is a warm, funny, hyper and moving portrait of a group of young ruffians finding themselves as musicians and artists. To me, Ridley’s approach sounds the best possible way to portray Hendrix – and Andre 3000 is not just a spot-on lookalike, but a brilliant musician and promising actor. I look forward to more details on this one as they surface.

What do you think of this idea? Can a Hendrix film avoid the biopic cliches?