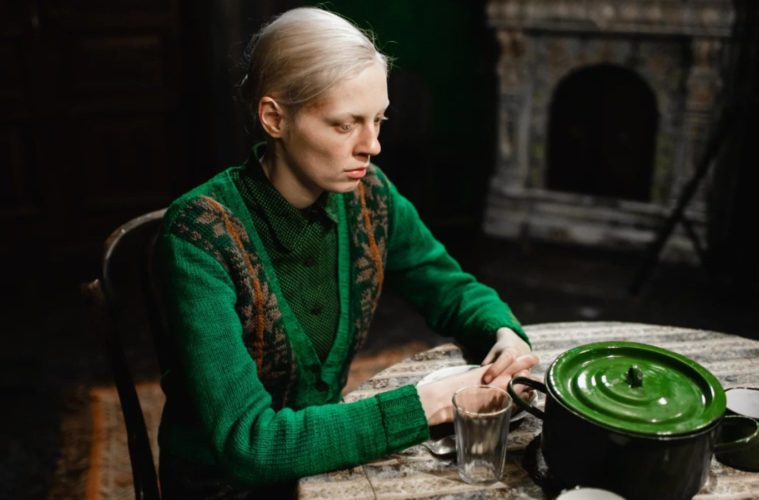 Hamburg Review: ‘Beanpole’ is a Radical Relationship Drama Examining the Trauma of War

The horrors of war are often told through male-centric narratives. Heroes who go through hell on the battlefield, brothers who sacrifice everything for each other, soldiers who return home scarred for life etc., all of which we’ve seen put on the big screen time and again. But wars are of course collective nightmares, tears in the fabric of history that leave no one–men, women, children–unscathed.

This is the premise of Russian writer–director Kantemir Balagov’s second feature Beanpole, a radical relationship drama that examines the trauma of war from a distinctly female perspective. It doesn’t feature any battle scene, but shakes you to your core with its depiction of the cold, shell-shocked vacuum that the human mind turns into in the wake of unspeakable atrocities.

Set in post-WWII Leningrad, the film opens with a persistent ringing noise, as if a bomb went off somewhere nearby. We soon realize there has been no explosion. Instead, it’s a medical condition of hospital worker Iya (Viktoria Miroshnichenko), nicknamed “Beanpole” for her tall, slender frame. Every now and then, Iya would fall into this stupefied, irresponsive state, her body stiff, everything around her canceled by a sonic buffer. In other aspects of her life, though, Iya seems to function just fine. She’s well-liked by her colleagues, including the head doctor Nikolay, and she cares for her adorable 5-year-old Pashka with what time and means available to her. After a tragic accident involving mother and son, a discharged servicewoman named Masha (Vasilisa Perelygina) shows up at Iya’s doorstep. This leads to the revelation of a surprising arrangement between the two friends/comrades/lovers and sets the stage for an indecent, if not downright perverse proposal.

The greatest feat of Balagov’s blisteringly insightful screenplay, co-written with Aleksandr Terekhov, is how it translates larger-than-life monstrosities into private grief and how it personalizes war. With the character Iya we see someone who’s stuck in limbo, both figuratively and literally. Her psychotic episodes render her dumbstruck and paralyzed, unable to change anything happening around her. This powerlessness also manifests itself internally, as Iya is eaten up by guilt that distorts her love for Masha, compelling her to seek redemption in the most hopeless places.

It’s more difficult to see through Masha, a façade of mystery and casual resolve. Her reaction to what should have been devastating news is strangely subdued and the way she treats Iya, someone she has shared a deep emotional bond with, is nothing short of cruel. Eventually we’ll find out just how damaged Masha is, when she sits down with a couple of posh, judgmental strangers and calmly shares what she endured during her time of service. Somewhat reminiscent of The Reader (more in reference to Bernhard Schlink’s powerful novel than Stephen Daldry’s film), this hair-raising, painfully revealing monologue tells you everything about shame, about being broken; it tells you how war is where not just humans but humanity itself goes to die, and that there really is no coming back after that.

Balagov directs all this quiet desperation with impressive precision. There’s a restless beat to the film à la Sunset, one that immediately takes you back to a time of great confusion and uncertainty. But compared to László Nemes’ high-brow head-scratcher, the sense of chaos is eloquently communicated here without compromising a succinct narrative. You’re right there with these characters, every step of the way, as they struggle to forgive themselves and move on.

In a scene that rivals anything from Breaking the Waves in terms of sheer, appalling wrongness, Masha, Iya and Nikolay are intimately entwined, each trying to make things right while engaging in the most mindlessly debasing act. It’s absolutely brutal to watch both for the visual violence and the fact that you get it. The film makes you understand every sorry thought that goes on in this uniquely tragic situation where basic human needs for love and salvation only drive people deeper into despair.

Kudos also to DP Kseniya Sereda with a special shout-out to costume designer Olga Smirnova. Beanpole looks stunning and, like Vitalina Varela or Portrait of a Lady on Fire this year, deserves to be called picturesque in that every frame brims with the aesthetic refinement of a painting. Contributing to that enchanting quality is the exceptional craftsmanship of the costume department. The uniforms, dresses and street clothes worn inform us so much about the characters’ circumstances and also just dazzle for their striking colors and texture. I can’t recall another piece of green garment that lights up the screen and bores into your eyes the way Iya’s frazzled overcoat does since Keira Knightley wore that fateful emerald gown in Atonement.

The history of war tends to be written by those who have fought in them but, as explored through aspects of motherhood and female sexuality in this film, the shockwaves of wars have a far wider reach. They destroy the lives and rob the humanity of anyone who comes in contact. Beanpole dares to imagine such an untold story and brings it into being with astonishing artistic and intellectual rigor. As a sophomore feature, it’s pretty remarkable.

Beanpole screened at the 2019 Filmfest Hamburg and opens on January 29.