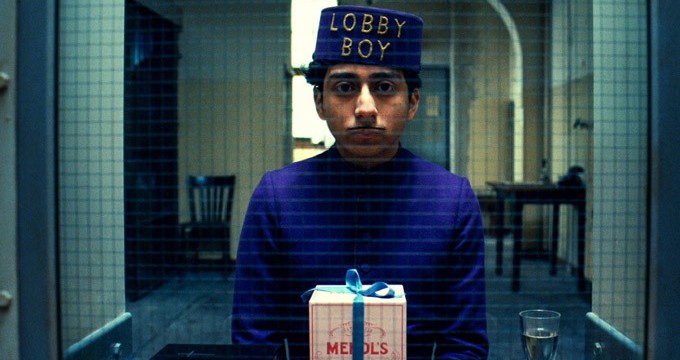 Tony Revolori‘s name does not carry any of the weight one might associate with Ralph Fiennes, Bill Murray, or Jude Law, and thus his involvement in Wes Anderson‘s new film, The Grand Budapest Hotel, has been rather significantly swept under the marketing rug. Thinking that Gustave H. is our guide through another one of the writer-director’s immaculately designed worlds, actually experiencing this effort yields the surprise of how central this newcomer’s character, Zero Moustafa, is to the manic, multi-tiered action — its lead, in fact, and by all means the film’s true heart and soul.

In light of my own viewing, I was keen to speak with the up-and-coming star, whose biggest role yet, by far, is a part most well-established actors his age would’ve killed to land. To get some insight into the working mind (and sets) of Wes Anderson, working in a 4:3 frame, and how one prepares for a screenplay as knotty as Budapest‘s, read on below:

Based on just the trailers, I felt like I knew what character orientation Anderson had devised here, and so actually seeing the film was a great surprise. Were you aware that Zero was Budapest’s true protagonist when you’d initially approached the project?

I was a bit confused who it was going to be perceived as, because Ralph does such an amazing job, as well as, you know, my… I think I do a pretty good job myself. [Laughs] So the characters are very similarly placed, and I didn’t know who was going to be the main protagonist. But I think it’s up to anyone; whoever thinks what is fine, in my opinion, but I do appreciate your saying I’m the true protagonist. That’s really cool.

How much were you given when submitting an audition? Was it just a scene?

It was just a scene — the interview scene, where Gustave is interviewing me to get my job as a lobby boy. For the first two auditions and, then, after the first two, it was down to my brother and I, they told us, and then I flew out to Paris, where they gave me the full script.

The structure is very surprising, and to see it unfold is, I think, one of the movie’s greatest pleasures. How did you react when first discovering that?

I thought it was fantastic and great, the way he placed it all; the way he did it was amazing, to be able to keep jumping back in time to these moments. The way he did it was very seamless and fantastic. Very story-like, which is great for this film, because I felt this film really is a “true story,” in many ways, so it was just fantastic to be able to see all these characters. You pretty much know what happens to all of them, and it’s great to see how everything unfolds.

Because Anderson is so well-known for his design, how much were you made privy to before stepping onto the set? Was there a surprise in seeing this, physically, for the first time?

Definitely. I was surprised all the time, because no matter how much you prepare yourself, with pictures and everything, the real thing was always just so breathtaking. I had seen cartoon versions of what the lobby was to look like, and everything like that, so I had a pretty clear image when I came onto set — you know, I knew that this was “our lobby” — but it, still, was just a fantastic thing. Adam Stockhausen and Wes designed a fantastic world, and I was just happy to be part of it.

When on these elaborately designed sets, how does having so many small details at your disposal help?

It’s great, because, as an actor, we were able to create — at least, I was able to create —  clear pictures, in my mind, where everything was. There was no greenscreen so, when I needed to point to something, I pointed directly to it; when I was walking to something, I was actually walking through this lobby. You’re able to create this realism and truly feel like you were in this hotel, because there’s no greenscreen — you’re not imagining it and it’s all there. You’re able to walk through as “this truly is the lobby” and feel attuned with this fantasy world.

I recently read an article which described Wes Anderson’s deliberateness in handling a screenplay, line readings, etc. Did you like having someone who takes that direction?

Both ways are great: to have a director who lets you have the freedom to do what you want, but there’s also greatness in having a director who knows what he wants. This is Wes’s movie, and, so, I feel what he wants is what you’re doing your best to get, and he’s one of the directors who can truly say, “I want Tony to fall out of a window,” and he will get people to do it for him. It’s fantastic to work for a director like that, and it’s a great challenge, to try to get exactly what he’s thinking, picturing in his mind. That’s another thing that’s really cool about it: getting to live up to that challenge.

Your section is in 4:3, and it feels as if the camera is a bit closer to you than a more “modern” frame would require, where your physical presence is really “felt” inside any given frame. As an actor, is there anything odd about being closer to the camera and with some tighter sets?

No, not at all. I kind of blocked those moments out — I was just thinking about my role and trying to do as best as I possibly could. Whatever they told me to do, I did my best to try to do it, and so I never really thought much about, “Oh, well, they’re shooting in 4:3” or, “Oh, well, they’re doing this and that.” I kind of went in and did what I was told.

There’s definitely a darkness to the film, sometimes to an unsettling degree. As an actor, is there any need to reconcile the tone and the content?

You know, there are a couple of moments where my character — my younger version of the character — definitely has sad moments, so I was able to move forward with that quite easily, because that’s something we all have — that kind of sadness, and I was able to get to it really easily. Wes and I had about prepared about four months before shooting, just talking to each other, sending each other videos of us reading the script, things like that. So I came in very prepared with this knowledge and, subconsciously, he got me where he wanted me to go; I was able to get there really easily.

As for Zero’s older counterpart — who’s played by F. Murray Abraham, who did an amazing job — he had a different view, a different process to get to Zero, because Zero was such a sad character at that point in his life, so there was that difference. We did keep it separate, and it was very, very simple and easy.

You talked about some physical work, which is very present later in the film. How do you prepare yourself for these scenes, where it seems like you’re enacting a great deal and Wes is requesting as much?

I always say I had the most “physical” character in the movie; I was lugging around all the time, which was really, really nice. There was no preparation for this, in any way — I just arrived on set, put on my costume, and they said, “Well, you’re running from here to here; you’re jumping out of a window; you’re going to be on a harness.” So I said, “You know what, let’s do it.” I had no questions or problems or anything — I just got up, got ready for the day, and that was it. Whatever was happening, that’s what was happening. The Grand Budapest Hotel will open in limited release on March 7.