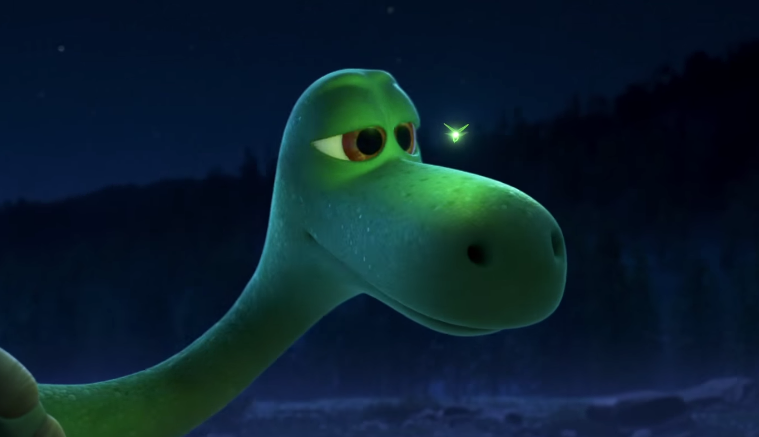 While we got a tease in front of Inside Out, today brings another look at Pixar’s next animation, The Good Dinosaur. Running over two minutes, the new trailer shows off much more of story that imagines if the asteroids never destroyed dinosaurs. In it, we follow an Apatosaurus named Arlo and his family. They are farmers and they need to get rid of “bugs” on their land, but it’s revealed it’s actually human cavemen, and the dinosaur befriends one.

Directed by Pete Sohn, he previously spoke about adding nature as the main antagonist, and that’s apparent in the nearly wordless trailer, displaying more of the environment and ensemble. With the new voice cast of Raymond Ochoa, Jeffrey Wright, Steve Zahn, A.J. Buckley, Anna Paquin, Sam Elliott, Frances McDormand, Marcus Scribner, and Jack Bright, check out the trailer and an international poster below.

“The Good Dinosaur” asks the generations-old question: What if the asteroid that forever changed life on Earth missed the planet completely and giant dinosaurs never became extinct? In theaters November 25, 2015, the film is a humorous and exciting original story about Arlo, a lively Apatosaurus with a big heart. After a traumatic event unsettles Arlo’s family, he sets out on a remarkable journey, gaining an unlikely companion along the way – a human boy. “The Good Dinosaur” is an extraordinary journey of self-discovery full of thrilling adventure, hilarious characters and poignant heart.