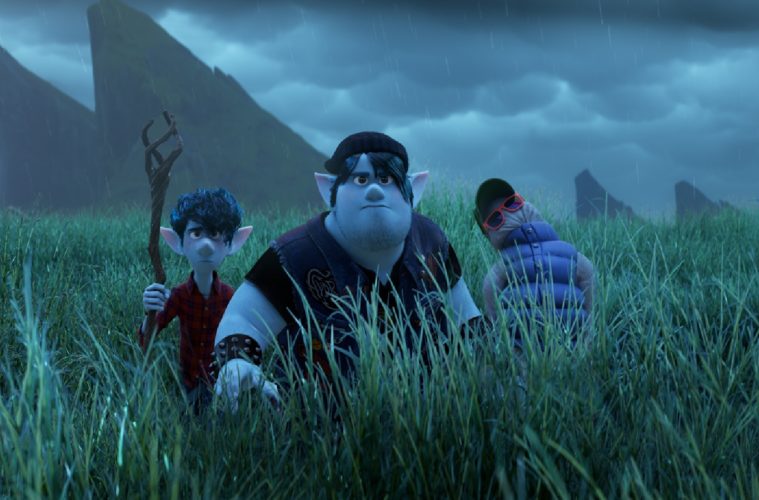 Watching the trailer for Pixar’s Onward a few months ago in a theater packed with children was an odd experience. The film, about teenage elfs on a magical quest, seemed like an eyebrow-raiser–an ultra-high concept animated entry that looked more Sony or DreamWorks than Pixar. (Those are not compliments.) Its central conceit–a spell brings back the elves’ late father for one day, but only the lower half of his body–seemed downright scary for little ones. It also seemed way more Weekend at Bernie’s than one would expect from the titans behind Toy Story and Finding Nemo. In other words, Onward appeared to be more Good Dinosaur than Inside Out.

Those fears were misplaced. Of course they were. Like James Cameron, Pixar should never be doubted. The studio’s remarkably consistent success continues with Onward, a delightful, genuinely moving film about children, siblings, and parents who just so happen to be fantastical creatures. That element is perhaps the film’s only real weak point. An early voice-over explains the backstory: Mythical creatures inhabit the earth, but the magic that was once commonplace has been replaced by modern conveniences. It’s a bit of a hurdle, this rather convoluted explanation. And at times the entire mythical creature motif seems unnecessary. Perhaps seeing a “real person” consisting of just a midsection, legs, and feet, seemed like a poor idea.

Tom Holland voices Ian Lightfoot, an elf navigating high school and impending adulthood with the help of his mother (Julia Louis-Dreyfus) and his older brother Barley (Chris Pratt). It’s a world much like our own–albeit one with pixies, elves, centaurs, and the knowledge that magic was once real. Shy in school and afraid to assert himself, Ian longs for a connection to the father who passed away before he was born. This opportunity arrives in unexpected fashion, the result of a magic staff, a gem, and directions left behind by his father. Barley, a great lover of magic, attempts to follow the directions and resurrect dad for one day. But it is Ian who proves successful–semi-successful, that is. The gem shatters before the process is complete, meaning the boys’ father is only half-formed.

Barley’s knowledge of the fantastic gives him a key insight: Finding another gem will allow the brothers to finish the job, and see dad once more. (One more for Barley, that is. While he never had the chance to say goodbye, Ian hopes to just meet his father once and for all.) Once Ian and Barley set out on their quest to find the gem, Onward moves from pleasant diversion to endearing delight. From a manticore who feels stifled as a restaurant owner (voiced with relish by Octavia Spencer) to an army of biker pixies, the path is full of turns and increasingly complex. The final stretch of the film is a typically Pixar-ian emotional powerhouse and actually quite subtle, which led to some confusion for my 9-year-old. Indeed, kids may have some questions about Onward’s story afterward. What will undoubtedly resonate, though, is a beautiful message about the virtues of siblinghood.

Briskly directed by Dan Scanlon and well-scripted by the director along with Jason Headley and Keith Bunin, Onward overcomes some story issues with winning vocal work from a sterling cast. Holland is his usual sturdy self as the awkward Ian, while Louis-Dreyfus and Spencer have some wonderful exchanges during their screen time together. But surprisingly, it is Chris Pratt who turns in the most memorable vocal performance. Barley is the type of lovably oafish character Pratt excelled at on Parks and Recreation and vocally in the Lego movies. Jettisoning the middle-finger confidence of Peter Quill and Owen Grady was the right move, and it makes for an enjoyably sweet performance.

The tiresome ranking of each new Pixar film is hard to ignore, and on the scale Onward likely falls someplace in the middle. This is not a bold new experiment in animated storytelling like Inside Out, nor does it offer the unforgettable characterizations of Toy Story. And that’s fine. Onward is a spring treat that might not lead to sequels or boffo merchandise sales, but will certainly please families and the Pixar faithful. Debating whether the film is “classic Pixar” is silly. Put those concerns aside and you’ll be rewarded with the first great family film of 2020.