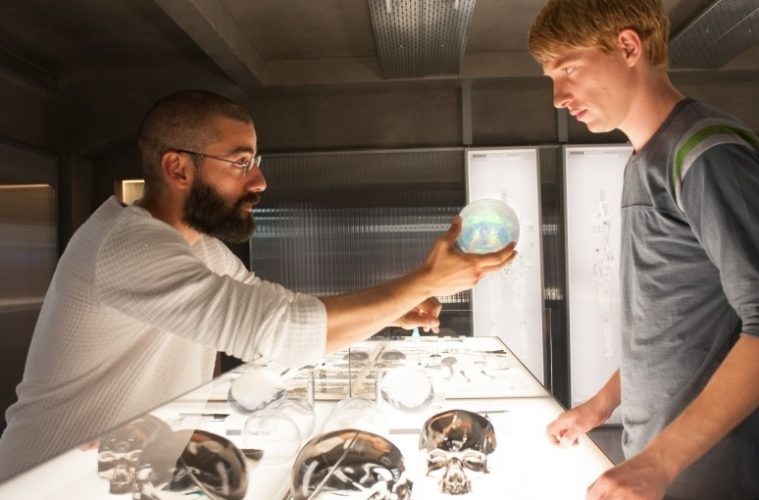 One is no doubt familiar with a certain sci-fi feature arriving next year starring Domhnall Gleeson and Oscar Isaac, but it won’t be the only one. After working closely with Danny Boyle on films such as Sunshine, 28 Days Later, and The Beach, Alex Garland expanded his resume, scripting Never Let Me Go and Dredd. Now next year will mark the debut of his first helming effort, the sci-fi drama Ex Machina, and today the first trailers have landed.

The story centers on a love triangle of sorts with Alicia Vikander as a robot woman in the middle, who is the world’s first true artificial intelligence. For those curious on when we’ll be able to see the results, A24 have recently announced they’ll distribute it on April 10th, 2015, which should make for a worthwhile viewing ahead of the summer blockbuster season. Check out the first trailers, which pack an intriguing set-up and great visuals, and a pair of posters below.

Caleb Smith (Domhnall Gleeson), a programmer at an internet-search giant, wins a competition to spend a week at the private mountain estate of the company’s brilliant and reclusive CEO, Nathan Bateman (Oscar Isaac). Upon his arrival, Caleb learns that Nathan has chosen him to be the human component in a Turing Test – charging him with evaluating the capabilities, and ultimately the consciousness, of Nathan’s latest experiment in artificial intelligence. That experiment is Ava (Alicia Vikander), a breathtaking A.I. whose emotional intelligence proves more sophisticated, seductive––and more deceptive––than the two men could have imagined.