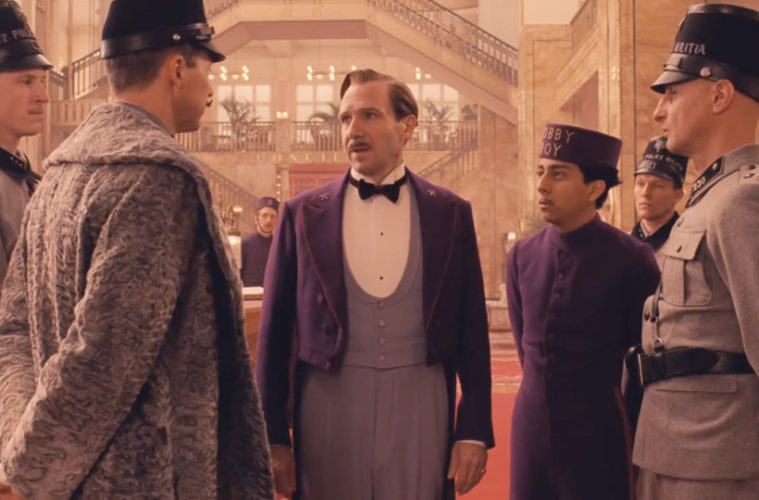 Unveiled at Berlin Film Festival today is Wes Anderson‘s eighth film and easily one of our most-anticipated of the year, The Grand Budapest Hotel. Premiering to a virtually across-the-board ecstatic response, thankfully we don’t have to wait long to see it, as the period caper, set mostly in the 1930’s, will land in theaters early next month. For those that are counting down the days, we’ve rounded up snippets from all the reviews coming out of the festival.

Before we get to that, though, Anderson and his cast sat down for a 50-minute press conference, which the festival has put online in full. Featuring the helmer talk about his influences, from Ernst Lubitsch to Stanley Kubrick, click the image below for the full press conference on the official site, attended by Wes Anderson, Ralph Fiennes, Tony Revolori, Willem Dafoe, Bill Murray, Jeff Goldblum, Tilda Swinton, Edward Norton, Saoirse Ronan and producer Jeremy Dawson, and continue for the reviews.

The Grand Budapest Hotel is the film with which Wes Anderson finally answers his critics, and the message could not be clearer or more immaculately embossed in Futura on an insert shot of the most delicate stationary: “Go fuck yourselves.” Anderson has been contemporary American cinema’s most hostile aesthete for well over a decade, and ever since 2003’s The Life Aquatic made it obvious that the filmmaker has exactly zero interest in apologizing for his affectations, each of his subsequent projects has been met with the kind of ecclesiastical rapture and blind derision typically reserved for racist politicians and superhero movie casting.

One of the more frequent accusations leveled at Wes Anderson — that he’s a filmmaker who favors style over substance — will ring even hollower than usual after “The Grand Budapest Hotel,” a captivating 1930s-set caper whose innumerable surface pleasures might just seduce you into overlooking its sly intelligence and depth of feeling. As intricately layered as a Dobos torte and nearly as rich, this twisty tale of murder, theft, conspiracy and unlikely friendship finds its maker in an unusually ambitious and expansive mood — still arranging his characters in detail-perfect dioramas, to be sure, but with a bracing awareness of the fascism, war and decay about to encroach upon their lovingly hand-crafted world. The result is no musty nostalgia trip but rather a vibrant and imaginative evocation of a bygone era, with a brilliant lead performance from Ralph Fiennes that lends Anderson’s latest exercise in artifice a genuine soul.

David Calhoun at Time Out London:

Like the ship of ‘The Life Aquatic’ or the townhouse of ‘The Royal Tenenbaums’, ‘The Grand Budapest Hotel’ comes with its own ready-made theatre and uniformed cast. From here, Anderson breaks out with verve on to trains, ski runs and cobbled streets to spin a wickedly funny tale that celebrates the final glory days of a dying world order. It’s all given a bombastic lift by an Alexandre Desplat score which crescendos in organs and drums. Full of Anderson’s visual signatures – cameras that swerve, quick zooms, speedy montages – it’s familiar in style, refreshing in tone and one of Anderson’s very best films. Alonso Duralde at The Wrap:

Wes Anderson’s dazzling new “The Grand Budapest Hotel” is course after course of desserts: marzipans, macarons, crème brûleé, tiramisu and profiteroles, presented with a flourish and served so promptly that you can barely catch your breath between treats. It’s not until an hour or two has passed that you realize, for all the wonderful flavors and beautiful plates, that you haven’t really eaten anything.

Tim Robey at The Telegraph:

Wes Anderson’s The Grand Budapest Hotel is opening the Berlin Film Festival, and it’s the most intensely pleasurable curtain-raiser in recent history, if not ever. Compared with the grimy liqueur that often gets chosen, it’s like a magnum of house champagne. You might get light-headed on the pure fun of it, which unleashes fresh waves of fun-within-fun at every point where you worry it could dry up.

Nico Hines at The Daily Beast:

This might just be Wes Anderson’s best film; it’s certainly his most thrilling. The cult director has bolstered the whimsical humor and trademark character studies with a raucous crime caper in The Grand Budapest Hotel, and it’s a riot.

Though I have tried many times over the years to like, or even just appreciate, Anderson’s films, with the exception of the work-of-genius Fantastic Mr. Fox, they elude me every time. The Grand Budapest Hotel strikes me as even less of a good thing, although, as its title suggests, it’s Anderson’s most elaborate, lavish-looking picture yet. The framing device for this marzipan monstrosity features an older writer from some fictitious Central European locale, played by Tom Wilkinson, reflecting on his younger days, when he was Jude Law.

Francesca Steele at The Independent:

[D]espite the abundance of stylistic affectations, this merry little crime caper about the adventures of a fastidious but kindly concierge (Ralph Fiennes) and his lobby boy protégé Zero (Tony Revolori), might well be the director’s greatest crowd-pleaser yet. It is warm, very funny and, despite the numerous narrators and time periods (demarcated by different aspect ratios, naturally), it is unexpectedly focused, packaged neatly into the form of a well-dressed murder mystery, and propelled by a sort of kinetic energy towards its inevitable conclusion. There is murder, a chase scene (on delightfully old-fashioned skis and a sledge) and a love affair. This is a thriller masquerading as whimsy – and it works. The game but losing battle waged by Old World grace and refinement against 20th century totalitarian thuggery is sympathetically portrayed by Wes Anderson via both arch and sophisticated farce in The Grand Budapest Hotel. With an attention to design detail that now has perhaps morphed from a preoccupation into a mania, this is as densely aestheticized an experience as has come from a quasi-mainstream American filmmaker in many a moon. In a very appealing if outre way, its sensibility and concerns are very much those of an earlier, more elegant era, meaning that the film’s deepest intentions will fly far over the heads of most modern filmgoers. Fox Searchlight can hope that the work’s boisterous, sometimes bizarre humor, as played by a colorful cast, will be sufficient to attract a sizable slice of the audience that made Anderson’s last film, Moonrise Kingdom, his second-biggest hit.

Over the years, Wes Anderson’s movies have steadily developed a lush, eccentric world that operates on its own terms, and “The Grand Budapest Hotel” excels at exploring it. Anderson’s colorful period piece reflects the sensibilities of its creator at the height of his artistic confidence. While it notably draws from preexisting material — namely, the writings of Viennese intellectual Stefan Zweig, though Anderson has also tipped his hat to various other wartime literature — one of America’s most distinguished modern auteurs has spun his clutter of reference points into a collage-like fantasy adventure so clearly fused with the rest of his oeuvre that it belongs to the writer-director more than anyone else. Yet within the constraints of his distinctive tinkering, Anderson remains a compelling storyteller who provides an actor’s playground, in this case providing Ralph Fiennes with one of his most distinguished roles. While it has many familiar ingredients — from the atmosphere to the ensemble of Anderson regulars in nearly every role — in its allegiance to Anderson’s vision, everything about “The Grand Budapest Hotel” is a welcome dose of originality.

At no point in its fleet runtime does anyone break into an actual dance routine — and honestly, someone probably should — yet the average Busby Berkeley musical barely contains as much regimented choreography as Wes Anderson’s dizzy, chintzy and improbably touching “The Grand Budapest Hotel.” Cast members don’t walk; they glide, skip and occasionally pop into the frame as if released by a lever. The camera doesn’t pan or track; it whirls and soars. The mise-en-scene is pulled into shape via an intricate operation of cogs and pulleys — some of them visible. All moving parts — cars, trains, bobsleds, even actors — run like artisan-built clockwork toys.

The two primary strengths The Grand Budapest Hotel has going for it are, first, Fiennes’s utterly delightful performance as the non-flamboyantly gay concierge who busies himself with the hotel, Romantic poetry and elderly, rich, insecure and blond women, and second, the set design (and yes, costumes and makeup as well, but primarily the sets). Gustave is a surprisingly complex man, and I say “surprisingly” because everyone else around him, even, to an extent, young Zero, is essentially a cartoon, albeit in the best way, comic sketches straight, as they used to say, out of Central Casting. Wes Anderson ushers in this year’s Berlin Film Festival with his latest intricate offering The Grand Budapest Hotel (2014). Starring Ralph Fiennes in the lead as concierge extraordinaire M. Gustave, Anderson marries old world opulence with his signature stylistics in what is a frosted gateau of a dramedy, trimmed with vibrant charm and wry humour. Whilst the film is dusted with a plethora of stars, for the most part the story focuses upon three central characters: the aforementioned Gustav (Fiennes); his protégé Zero (newcomer Tony Revolori); and Agatha (Saoirse Ronan), a talented patisserie chef with whom Zero falls in love.

A warmly whimsical and deftly magical tale of love, robbery, murder and comedy mishaps all set against the fantastical backdrop of an imaginary central European region, Wes Anderson’s beautiful and thoroughly enjoyable The Grand Budapest Hotel sees the director deliver his best film. It will enchant fans of his signature precious and warmly deadpan comedy style and draw in those who may be new to the unique Wes Anderson vision.

The film is a fleet-footed, ultra ornate mittel-European caper with all retro fittings in place and bursts of cartoonish macabre filling in where the Martini dry humour once was. And here the genteel, syllable-heavy olde world dialogue is written so that it dovetails with the customarily meticulous production design and Robert Yeoman’s snowglobe framing. The cinematic reference points range from Lubistch, Murnau, Von Sternberg and famed German silhouette animator, Lotte Reiniger, right through to Kubrick (particularly The Shining), while the film is said to be primarily inspired by the writings of Austrian literary stylist, Stefan Zweig. The delicate wordplay in the script feels, if not purloined from Zweig’s pages, then certainly studiously and fondly recalibrated from the big screen with Anderson’s customary reverence.

Anne Thompson at Thompson on Hollywood:

From the opening frames of “The Grand Budapest Hotel” (which opened the Berlinale Thursday and hits screens stateside via Fox Searchlight on March 7) you know you are in Wes Anderson Land. It’s lush and gorgeous and colorful and twee and utterly obviously fake. And it’s hilarious, with a sprawling cast of comedians–led by the remarkable Ralph Fiennes as the concierge, M. Gustave– crammed into every nook and cranny. The movie is infectiously fun, and looks as if everyone–from the actors and the writer-director, cinematographer (Robert Yeoman), production designer (Adam Stockhausen) and costume designer (Milena Canonero) on down, are having a fabulous time.