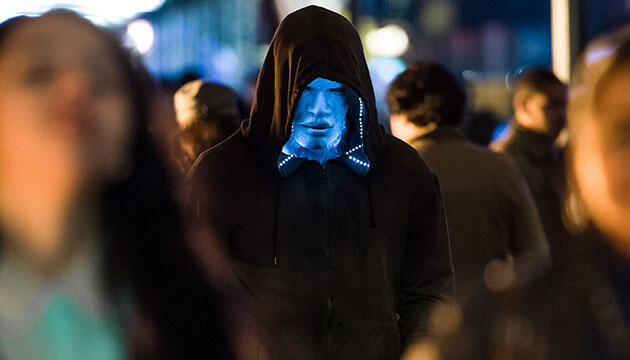 Thanks to Quentin Tarantino, Jamie Foxx is riding high off his turn in Django Unchained and for his next role, he’ll be switching to the villainous side for one of next summer’s biggest films. Revealed on the Times Square set of The Amazing Spider-Man 2 last night, the actor would make Tobias Fünke proud, as he appeared almost unrecognizable, covered in blue as the baddie Electro. Directed by Marc Webb, check out what Foxx told Blackfilm regarding his character’s costume and see the rest of the photos below:

It won’t be green and yellow. It will be a different color. They (the producers) want something for the future. They want to have it more grounded and not as comic book-y, so it won’t be green and yellow. They want to try new things, like a liquid rubber and things like that, and there are all these bolts and stuff in my arms when they are hanging me upside down and trying to figure out what happen. How did he become this way? So, it will be some new stuff. Following all the Spider-Man photos (via DailyMail), we’ve also got our first look at Ben Stiller in his upcoming remake of The Secret Life of Walter Mitty. Directed by Stiller himself, the film sees him as a LIFE Magazine worker who goes on a wild adventure in order to find a photo taken by Sean Penn‘s character. Also starring Kristen Wiig, Adam Scott, Shirley MacLaine, Patton Oswalt and Kathryn Hahn, check out the image of Stiller with a skateboard in rough terrain below (via LA Times). The Secret Life of Walter Mitty hits at the end of the year, while The Amazing Spider-Man 2 swings into theaters next May.