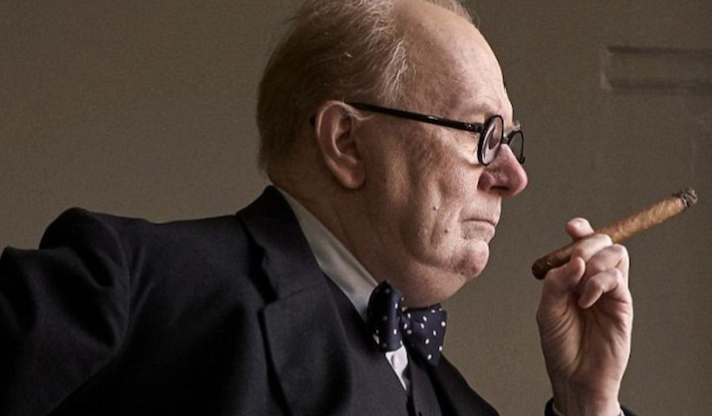 For an actor who has worked with directors such as Francis Ford Coppola, Ridley and Tony Scott, Thomas Alfredson, Christopher Nolan, Robert Zemeckis, and more, it’s somewhat remarkable that Gary Oldman has only once been nominated for an Academy Award (deservedly so, for his fantastic performance in Tinker Tailor Soldier Spy). Unless something goes awry, we’d imagine he has a strong chance once again next season for a new biopic.

Production recently began on Darkest Hour, a new Winston Churchill biopic with Oldman in the lead role. Directed by Atonement and Anna Karenina‘s Joe Wright (who just helmed Black Mirror‘s “Nosedive”), the first look has now arrived of Oldman playing the British Prime Minister, and his transformation is staggering.

Scripted by Anthony McCarten (The Theory of Everything) the cast also includes John Hurt as Neville Chamberlain, whom Churchill succeeded as Prime Minister; Lily James as Churchill’s personal secretary; Ben Mendelsohn as King George VI; and Kristin Scott Thomas as Churchill’s wife, Clementine. As we await the first trailer likely sometime next late spring/summer, check out the synopsis and first look below.

Within days of becoming Prime Minister of Great Britain, Winston Churchill must face one of his most turbulent and defining trials: exploring a negotiated peace treaty with Nazi Germany, or standing firm to fight for the ideals, liberty and freedom of a nation. As the unstoppable Nazi forces roll across Western Europe and the threat of invasion is imminent, and with an unprepared public, a skeptical King, and his own party plotting against him, Churchill must withstand his darkest hour, rally a nation, and attempt to change the course of world history.

For reference, here is the real Churchill: