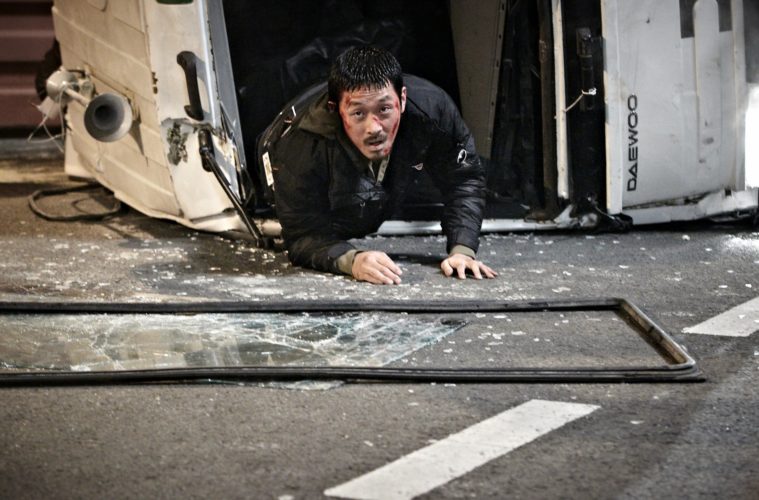 Swamped doesn’t even begin to describe how I felt this weekend, yet I’m still alive and well. The ticketing system from earlier in the week continued to work flawlessly for all involved, though I heard a few grumbles about some not getting tickets for the screenings they wanted. However, standby at Fantastic Fest has yet to fail me or anyone I know that were diligent and willing to wait. Instead of having a daily journal as was intended for this weekend, I have decided to clump them all together in two parts for today. So, let’s get to the recap of this fantastic weekend.

The Yellow Sea from director Hong-jin Na (The Chaser) is a Korean action drama that showcases over half a dozen vicious knife and hatchet fights in a riveting but long-winded story. The film follows a down on his luck taxi driver who is left with the extreme debt of his wife’s visa to get into Korea for work and has lost communication with her. He stumbles upon someone willing to give him a chance to get out of his debt and possibly search for his wife if he does one thing: kill someone. Without many choices left, he sets out to stalk his prey. However, once he has his target in sight someone else moves in and bungles the entire operation. On the run and pegged for the murder, he not only has to evade the police but the partners of the man he killed.

Meanwhile, they try and track down who hired the taxi driver and end up stumbling upon the wrong guy to mess with. With a hatchet as his weapon of choice for himself and his bandits, the two clans leave a bloody wake of destruction across Korea. The knife fights are brutal, and the action is intense. Despite running 157 minutes, it manages to keep your interest, though it does feel its length. This film doesn’t fly by by any means. The Yellow Sea also takes a bleak and cruel look at life outside of Korea in this region between Russia, Korea, and China. Truly, it’s no man’s land. The narrative seems like icing on the cake to the knife fights and action that take place. However, it does have fault in being convoluted and twisting to its own detriment. I was left feeling that they struggled to even cut the film down to its current runtime because there are a lot of narrative strings you almost seem thrown into the middle of. This film earns its R rating and I can’t recommend it enough as another entertaining showcase that the Korean filmmakers out there today are near the top of their game. Next on my list Friday was Headhunters, a Norwegian art heist film that nearly leaves several plot holes open before attempting to sweep them all under the rug with a final narrative twist. Much of the film feels cliched as the driving twist is an irritating moment where a character stops in the middle of an important action to have an epiphany. The film begins with Roger, a smallish blonde man that steals countless paintings to feed his ego and to keep his beautiful wife’s attention. He is a corporate middleman and uses his power to setup meetings between potential employees and employers while learning about their personal assets. While on those meetings, he uses an inside man at a security system company to gain access to the paintings, replacing them with fakes.

One of the biggest flaws is Roger himself. He is smooth but unlikeable and it is the cat and mouse game that occurs when the attractive Clas, who recently left a competitor to Roger’s firm, is introduced to him by his wife that keeps you intrigued. The film turns into a comedy of errors as things continually get worse for Roger when he tries to steal a priceless painting from Clas and actually keep it. The odd thing about Headhunters is that while it has several flaws, some big and some small, it manages to hold your interest and give some genuine laughs and thrills. However, the film ultimately feels like a hollow shell of something it could have been. The third film for Friday was The Corridor. A small budget doesn’t contain the film, as it smartly utilizes one location to its full amount while providing an intriguing premise that stumbles in its execution. We are given details about a terrible day in Tyler’s life where he has snapped after his mother’s sudden death and when his friends, Everett, Chris, and Robert try and rescue him, he leaves two of them with permanent scars. Now, a year or so later, they decide that upon Tyler’s release from a mental ward to get the group together again with Tim and head out to a cabin deep in the woods to just get away from it all. However, when they discover a mysterious ethereal corridor in close proximity to the cabin, everything changes.

The film sets up the characters but never gives them time to really seep in. More or less, they remain two-dimensional and when shit starts to hit the fan the audience is left torn with why we are supposed to feel anything for them. The mysterious corridor is never fully explained, leaving many possible interpretations available and while the film showcases the character’s going through changes, answers are largely left out of the picture. For some, that’s a maddening experience, but the ideas it plays on are interesting. To see the characters dissolve into absurdities and slowly turn on each other is fascinating, but the story is again hampered by my lack of concern for the characters. The fourth and final film Friday night was a French horror called Livid. The film was actually one of my most anticipated films of the festival, but it sadly failed to combine the many elements and sub-genre tropes it was going for. A teenage girl has started a new job as a caretaker of the sick and weary who can’t take care of themselves. When her trainer takes her to the local spooky mansion to treat an ancient comatose patient, the rumor of hidden treasure piques her interest. However, it piques more than the interest of her boyfriend, who convinces her and his friend to go out to the mansion and see if they can discover said treasure.

The film sets up a fun premise with a downright moody atmosphere, and the house is a character itself. Inanimate objects are given an ominous feeling, and it feels like the film may actually pull off a simple haunted house concept. There are flourishes here and there that give it its own unique feel, but everything quickly turns during a major narrative act. The fact that that turn of events occurs from sheer stupidity should have been a bad sign of things to come. Adding to the frustration is the inclusion of flashbacks in the middle of intense sequences that destroys the tension it carefully built. They also start to mix in odd elements and a running tragic storyline of the comatose patient that feels like a completely different film. The final thirty minutes of the film are as brutal as they are bizarre, and sometimes the low-budget nature of the film shines through particularly in the makeup effects. Then there is the final closing portion that is even more absurd and frustrating than anything before it.